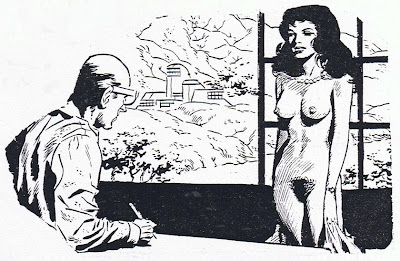 A native of India, Fershid Bharucha became a French citizen, notable as an artist, editor, translator and publisher in France, where he introduced Europeans to American artists in his USA Special magazine and also published hardcover French albums with comics by Will Eisner, Rand Holmes, Shary Flenniken, Mark Schultz, Bernie Wrightson and others. His own artwork was in early issues of the Hot Stuf ' and Bizarre Sex undergrounds. I came in contact with Fershid through a curious sequence of events.

When I learned that a graphic story I had scripted and packaged for Heavy Metal had been reprinted in Europe, I contacted Heavy Metal to get additional payment for myself and the artists involved. The rates at Heavy Metal were so high that I didn't expect any problem in getting a check for their resale. However, I was taken aback by the magazine's curious response, which came down to, "Prove it." Apparently this was because no records were kept when stacks of materials were shipped to France. It seemed pointless to get into an argument over such a matter, so playing by their rules, I wrote to Fershid who gladly sent me some copies of USA Special with the full-color story. I passed a copy along to Heavy Metal with a bill, and eventually we did get paid. 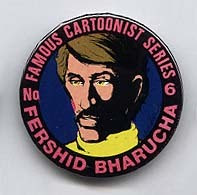 When work on Against the Grain got underway in 1985, Fershid sent me some photocopies of Wally Wood art from his files. This included an odd, unlabeled inked drawing by Wood showing a man talking to a nude woman standing in front of his desk. Attached was a note from Fershid: "Woody rendered this panel on an EC page. Gaines didn't think it was funny. I don't know what story it's from. Do you?" It had a certain familiar feeling to it, and I began turning pages in Weird Science and Weird Science-Fantasy. It didn’t take more than a few minutes to spot it as identical to the layout and characters in panel six, page five of Wood's story "The Children" in Weird Science-Fantasy #23 (March, 1954), about the mutated children of space colonists. 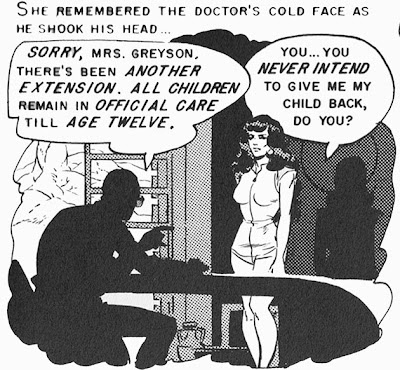 As discussed in past interviews, pranks at EC often involved hoax art never intended to be published. On several occasions, Wood brought in finished art with fake pasteovers on top of panels, calculated to surprise someone in the office and trigger a laugh. Interviewed in Bill Spicer's Graphic Story Magazine, Harry Harrison recalled, "We did two or three stories which gave us some laughs monkeying around with the artwork, mainly to relieve us from the boredom of having to illustrate lousy scripts. One was on a story called “Playtime Cowgirl” for an EC Western romance (Saddle Romances 11, March-April 1950). We brought the thing in originally with a big dong in the horse’s crotch, about four feet long, circumcised with crabs, real crabs and lobsters hanging from it, spider webs, Band-Aids all over it. Turned it in to Gaines, who loved it and kept it to show to his advertising man, Lyle Stuart. They showed it around; then forgot about it. Finally, it went to the engraver where they took black plates of it, then proofs, which got as far as the colorist, who was the one who caught it. ‘Mr. Gaines, isn’t this kind of a funny-looking horse?’ Gaines screamed to think it could get so close to going through. We just painted it out. They reshot the black plate, but it almost got by. Another one was also in the romance comics. They always had some title like ‘She Married a Man Who Gave Her No Love,’ which we changed to ‘She Married a Man With No Balls At All’ and pasted it over the real title. Stuck a lot of baseballs and footballs around the artwork, which could be peeled off. We’d sit around in the studio and think of ways to liven up the stories this way.”

I stared at the page and the pasteover and realized this was a rare opportunity to see one of the long lost EC prank pages from decades earlier. With minimal effort I could reconstruct the way the panel looked in 1954. I went to a copy shop and sized the two elements to match. When I pasted them together, it was a perfect fit, requiring virtually no retouching, even though the background was different and the foreground figure was a silhouette in the original. So there it was: a restoration of the page as it appeared on the day Wood, anticipating hilarity, walked into the EC offices and pulled the finished inked story from his portfolio. I viewed this as a significant discovery, so the recreation page was included in the stack of artwork I wanted to include in Against the Grain. 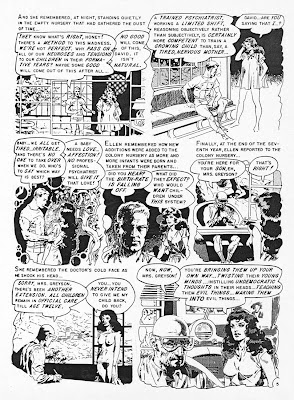 As designer Greg Sadowski and I worked on the book, we became aware of the full extent of censorship executed on both language and images by prudish publisher John Morrow. To his credit, Morrow far outstrips many publishers in accurate accountings and immediate payments to creators. But in terms of censorship, it was as though decades had never passed, leaving Morrow with a retro view akin to the attitudes of mid-century Midwestern small towns. I had agreed to the censorship because I wanted to see the book published after years of waiting. (Fantagraphics had originally commissioned the book but did not move to print it. When ten years passed, I asked them to return it to me.)
Greg was so surprised by the censorship that he did not even really believe it was true. Once he got past his initial disbelief, he was forced to go through the book, yank certain pictures and insert replacements. It seemed important, however, to retain the page from "The Children," but that would require masking parts from the panel. Should we use black bars? White bars? Greg's solution was simply to white out three spots on the figure.

In retrospect, I should have just deleted the entire page from the book, because the imposed restraints sabotaged the situation. The caption explained it was a restoration, but the alteration to remove body parts from a previous alteration left some readers scratching their heads in complete confusion. They read the caption, looked at the panel but were baffled by the image of a nude turned into a non-nude, a riddle wrapped in a paler shade of enigmatic whiteness.
So this Potrzebie presentation is aimed at banishing bewilderment with a comparison of the various elements: the original EC panel, the EC prank panel and the page from the past.