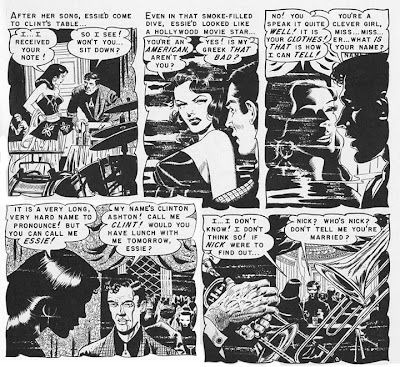 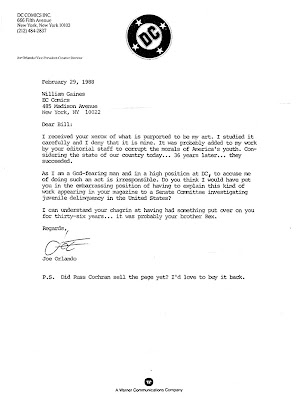 The story "A Rottin' Trick!", illustrated by Joe Orlando, was published in EC's  Tales from the Crypt 29 (April-May 1952). When the story was reprinted in hardcover in 1979, the larger page size and b/w reproduction on quality paper revealed the artwork in greater detail than was evident in the original comic books on newsprint.

©2008 WMG
Some noticed unusual human figures cavorting in the fabric design on the drapery in the background of page three. Covered by murky. dark purple ink in the original comic book, these drawings went unseen by both editors and readers in 1952. Given the censorship climate of the 1950s, the discovery then of this single panel could have been devastating for EC publisher Bill Gaines.

Eventually, during the 1980s, someone brought the page to the attention of Gaines, who sent a photocopy to Orlando and demanded an explanation. Orlando responded by writing a letter to Gaines about the artwork on February 29, 1988. The closing sentence about "your brother Rex" is a joke, a reference to a funny hoax Gaines pulled in the 1950s, when he had the Mad office boy convinced that he had an identical twin brother, the evil Rex Gaines, who sometimes visited the Mad office.

This was not the only time a prank was slipped into an EC story. In Frontline Combat 4, the story "Bomb Run," illustrated by John Severin and Bill Elder, has an unusual last panel. It shows a copy of Homer's Odyssey, but the drama of the story is diminished because words from the familiar Ajax Cleanser singing commercial were lettered onto the page of the open book by prankster Elder: "Ajax the foaming cleanser Buh Buh Buh Buh Buh Soaps the dirt right down the drain". Perhaps he assumed that the lettering would reduce and become illegible or that it would be deleted before publication. (The full lyrics went something like this: "Use Ajax (boom boom), the foaming cleanser... (boom bub boom buh boom boom boom) soaps the dirt right down the drain... you'll stop paying the elbow tax when you start cleaning with Ajax! So remember... use Ajax, the foaming cleanser, soaps the dirt right down the drain. bub-bub-bub-bub-bub-bub-boom!") In this case, after EC received a stack of letters from puzzled readers, they apologized in Frontline Combat 6 for their "clumsy oversight".

For the earlier installment on this subject, describing some of the EC art pranks which did not get published, click here. 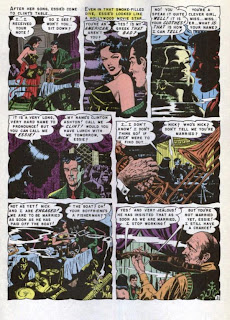 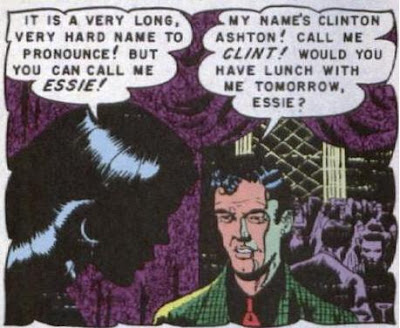 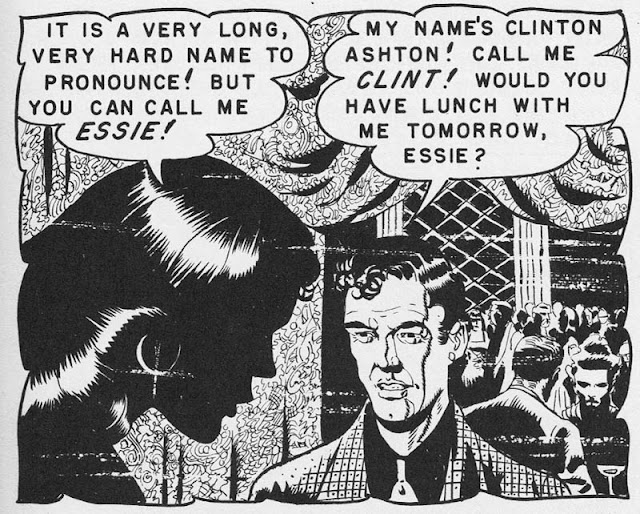 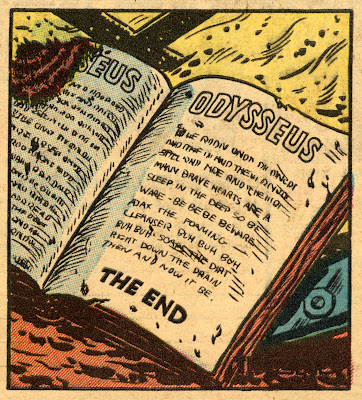 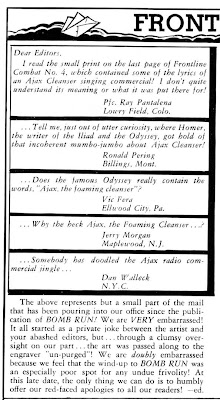 Comments:
Considering the clubby, humor-laden atmosphere in the EC offices, there must be many hidden illustrations and messages scattered throughout the EC publications.

What? No mention of the almost-prohibited proper noun "Clint"?

In juxtaposition with the illicit drapery?