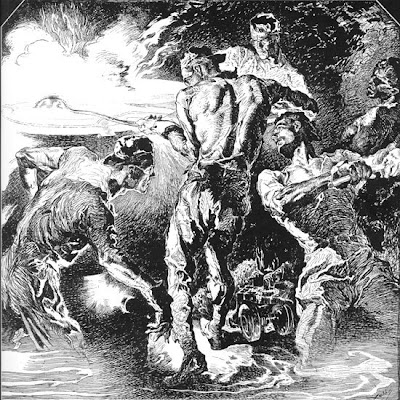 Joseph Clement Coll (1881-1921) was only 41 when he died, but in 20 years he defined the art of adventure illustration. His work was a major influence on Roy Krenkel, Frank Frazetta and Al Williamson. The dynamic b/w illustration here dates from 1915. For more Coll, see the two books published by Flesk. Also see "Coll" by Jim Vadeboncoeur, Jr.  A reprint of King of the Khyber Rifles, illustrated by Coll, is due in the fall. 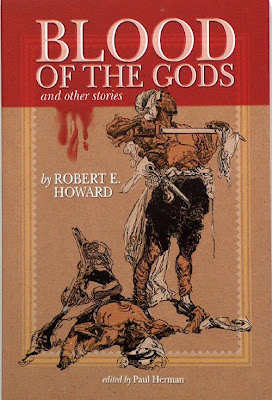 Johnny Mercer and Richard A. Whiting teamed in 1937 to compose "Hooray for Hollywood," sung by Johnnie "Scat" Davis (1910-1983) in Busby Berkeley's Hollywood Hotel (1938). The song became a familiar standard, receiving an ASCAP award in 1987 in the "Most Performed Feature Film Standards on TV" category.

Over four decades ago, Mad writer Frank Jacobs wrote the satirical song "Hooray for Wally Wood!" not long after Bill Gaines took the Mad artists and staff on a vacation trip to the Virgin Islands. To thank the publisher for the trip, two shows were created by Mad's writers (Jacobs, Nick Meglin, Stan Hart, Larry Siegel) and staged in Gaines' Manhattan apartment. "Hooray for Wally Wood!" was sung by Jacobs at the first of these two shows.

Meglin recalled, "Afterwards, any time Wally came in with a job, Bill would sing the first line." Grant Geissman transcribed Jacobs' lyrics from the original early 1960s tape recordings. The lyrics were published for the first time in Against the Grain (2003) when designer Greg Sadowski dropped them into the final panel of "The Mad 'Comic' Opera" by Jacobs and Wood from Mad 56 (July 1960). 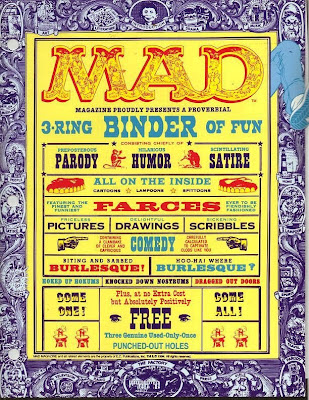 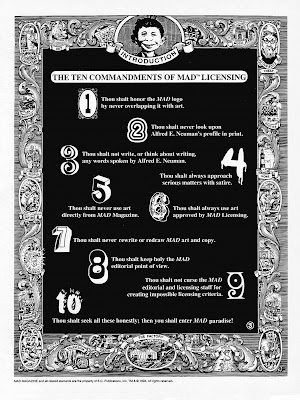 Above is a logo by Harvey Kurtzman showing the mad pursuit of a herd of centaurs. "Peel me another grape, Pocahontong," and click on logo to see the details. [Obscure quote from Mad 11] Control click the Mad Style Guide heading to hear The Stan Freberg Show of October 20, 1957.

As I previously mentioned here, in 1994 I was the editor of the Mad Style Guide which featured various product designs for use in Mad licensing.

This project involved working with several Mad cartoonists to create new art, much of which has never been seen anywhere. So I'm going to post some of it here.

Note the Kurtzman-Elder signature in the lower left corner of this border design, created in the mid-1950s as Mad made the transition from comic book to magazine. However, this is not the same border design that first appeared on Mad #24. Possibly after this was done, Kurtzman decided the little cartoons were so tiny and detailed that he needed a border design less complicated. Certain picture ideas, such as "The Factory," were retained in the final version (yet totally redone by Elder). This was created at a time when the long-run radio programs had vanished as millions purchased television sets, so the picture for "Radio" shows attic mice tuning in a cobweb-covered radio.

Click to enlarge. I've scanned the b/w page extremely large so details will not get lost.

Here is Larry Yust's unforgettable short film The Lottery (1969), one title from an Encyclopedia Britannica educational film series. During the 1970s, I saw that Massachusetts Educational Television had made the series available, yet there was a curiosity. All the titles in the series were listed with the exception of The Lottery. This struck me as somewhat peculiar, so I made a phone call to find out why. I spoke to a woman who said that the MET "board members voted it out." So there you have it: This film was banned in Boston.

This is easily the best adaptation of the famed Shirley Jackson short story, first published in The New Yorker (June 28, 1948). Filmed in Fellows and Taft, California, the short is so naturalistic that it opens with a disclaimer ("The following is fiction"), even though it was part of a series called Short Story Showcase. Many people remember seeing this film in school and wanted to see it again years later, but it was hard to locate until it resurfaced six months ago.

Joe Summers is played by Billy Benedict, a familiar face during the 1940s as a regular in the Bowery Boys. Benedict, who made almost 300 films and TV episodes before his death in 1999, was reunited with director Yust in the horror film Homebodies (1974), one of the few features ever directed by the talented Yust. Benedict spoke briefly about working with Yust in this interview.

The Academic Film Archive cited this "as one of the two bestselling educational films ever". When it was made, it had an accompanying ten-minute commentary film, Discussion of The Lottery by USC English professor Dr. James Durbin. To see the Durbin discussion, go here.

Shirley Jackson recalled reactions to the story in her 1960 lecture "Biography of a Story":


On the morning of June 28, 1948, I walked down to the post office in our little Vermont town to pick up the mail. I was quite casual about it, as I recall - I opened the box, took out a couple of bills and a letter or two, talked to the postmaster for a few minutes, and left, never supposing that it was the last time for months that I was to pick up the mail without an active feeling of panic. By the next week I had had to change my mailbox to the largest one in the post office, and casual conversation with the postmaster was out of the question, because he wasn't speaking to me. June 28, 1948 was the day The New Yorker came out with a story of mine in it. It was not my first published story, nor my last, but I have been assured over and over that if it had been the only story I ever wrote or published, there would be people who would not forget my name.


I had written the story three weeks before, on a bright June morning when summer seemed to have come at last, with blue skies and warm sun and no heavenly signs to warn me that my morning's work was anything but just another story. The idea had come to me while I was pushing my daughter up the hill in her stroller - it was, as I say, a warm morning, and the hill was steep, and beside my daughter the stroller held the day's groceries - and perhaps the effort of that last 50 yards up the hill put an edge to the story; at any rate, I had the idea fairly clearly in my mind when I put my daughter in her playpen and the frozen vegetables in the refrigerator, and, writing the story, I found that it went quickly and easily, moving from beginning to end without pause. As a matter of fact, when I read it over later I decided that except for one or two minor corrections, it needed no changes, and the story I finally typed up and sent off to my agent the next day was almost word for word the original draft. This, as any writer of stories can tell you, is not a usual thing...

One of the most terrifying aspects of publishing stories and books is the realization that they are going to be read, and read by strangers. I had never fully realized this before, although I had of course in my imagination dwelt lovingly upon the thought of the millions and millions of people who were going to be uplifted and enriched and delighted by the stories I wrote. It had simply never occurred to me that these millions and millions of people might be so far from being uplifted that they would sit down and write me letters I was downright scared to open; of the 300-odd letters that I received that summer I can count only 13 that spoke kindly to me, and they were mostly from friends. Even my mother scolded me: "Dad and I did not care at all for your story in The New Yorker," she wrote sternly; "it does seem, dear, that this gloomy kind of story is what all you young people think about these days. Why don't you write something to cheer people up?"


Curiously, there are three main themes which dominate the letters of that first summer—three themes which might be identified as bewilderment, speculation and plain old-fashioned abuse. In the years since then, during which the story has been anthologized, dramatized, televised, and even—in one completely mystifying transformation—made into a ballet, the tenor of letters I receive has changed. I am addressed more politely, as a rule, and the letters largely confine themselves to questions like what does this story mean? The general tone of the early letters, however, was a kind of wide-eyed, shocked innocence. People at first were not so much concerned with what the story meant; what they wanted to know was where these lotteries were held, and whether they could go there and watch.