Where did people go for fantastic tales before EC Comics? Click heading above to hear five 1948-49 episodes of Wyllis Cooper's Quiet Please.
©WMG 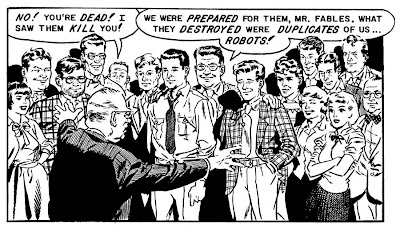 With the recent press release announcement about a forthcoming film biography of Bill Gaines, Ghoulishly Yours, William M. Gaines, one can speculate on the casting of EC staffers and how they will be depicted. In this Wally Wood drawing from  "EC Confidential!" (Weird Science 21, September-October 1953), we see (l to r) most of the EC crew: Jack Kamen, Joe Orlando, Johnny Craig, Harvey Kurtzman, Graham Ingels, Al Feldstein, Bill Gaines, Wally Wood, Al Williamson, Jack Davis, Bill Elder, John Severin and George Evans. Missing from the line-up here are Bernard Krigstein, Reed Crandall, Frank Frazetta and Roy Krenkel. EC colorist Marie Severin (sister of John Severin) is seen at far left. The other women who worked in the EC offices were Gloria Orlando (married to Joe Orlando in 1951), Nancy Siegel (married to Gaines in 1955) and receptionist Shirley Norris. Tatjana Weintraub (married to Wally Wood in 1950) was an uncredited artist on some EC pages. Here's the 2/14 press release about the movie:


John Landis (National Lampoon's Animal House, The Blues Brothers, Masters of Horror) has been attached to direct the authorized feature biopic, Ghoulishly Yours, William M. Gaines. Landis will develop the project with Joel Eisenberg, who is penning the screenplay based on the life of the titular EC Comics' publisher (Tales from The Crypt, Mad). Pic will revolve around the banding together of an anti-establishment group of artists and writers, led by a reluctant Gaines and cohort Al Feldstein, as they produce their controversial yet hugely popular line of comic books. At the peak of his success Gaines becomes an unwitting First Amendment figurehead, defending his livelihood against the U.S. government amidst accusations of perpetuating juvenile delinquency. Landis most recently helmed Mr. Warmth: The Don Rickles Project for HBO. Eisenberg is a partner in production concern EMO Films, LLC with Tim Owens and Eugene Mandelcorn. Project is authorized by William M. Gaines Agent, Inc. 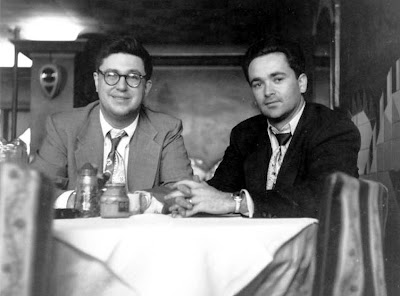 Feldstein has signed on as the Creative Consultant of Ghoulishly Yours, William M. Gaines. In this photograph from the early 1950s, Gaines and Feldstein take a lunch break after spending the morning at 225 Lafayette Street writing and proofreading EC Comics. Cartoonist Vince Musacchia (see link at right) notes the photo was probably taken inside Patrissy's Restaurant, located in Little Italy at 98 Kenmare Street, just around the corner from 225 Lafayette Street, and indeed, Patrissy's is mentioned in both Frank Jacobs' The Mad World of William M. Gaines (Lyle Stuart, 1972) and Digby Diehl's Tales from the Crypt: The Official Archives (St. Martin's, 1996). "We'd plot in the morning, then go to Patrissy's, the local Italian restaurant," remembered Feldstein. "We'd gorge ourselves on spaghetti and manicotti and bread. I got fat. In a very short time I ballooned from 150 to 180." Feldstein soon chose to have melba toast and cottage cheese at the office instead of scanning the Patrissy's menu daily. Patrissy's opened in 1906, and eight decades later Danny Patrissy sold his restaurant to Arnold Magliaccio in 1995. It became NoLita's (a portmanteau since 1994 from "North of Little Italy") when it was taken over by Nicholas Barnes in 2000. So we are looking at a photo of the restaurant where EC stories were discussed and developed, leading to the question: Will Patrissy's be recreated for the movie?

Frank Jacobs' book was in the hopper for a film adaptation by HBO, as Jacobs recalled in 2006: 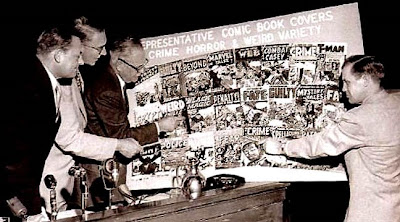 My book, The Mad World of William M. Gaines, was optioned six years ago by HBO. They held onto it for five years, then Fox/Searchlight productions, a division of Fox, took over, and now they’re finding that they don’t have enough in their budget for the film we want. So now it looks like Fox is selling the rights to another studio. I don’t know where it’s at right now, but I’m still waiting for the movie to be made. And it (the book) still has a good cult following, which pleases me. I get nice comments about it from time to time. So far as Oliver Platt goes, he seemed the choice early on. It had to be a young actor who was portly, who could pass for Bill Gaines because the script of the movie starts with Bill Gaines coming in knowing nothing, developing EC, and coming up with the horror comics. It covers the whole horror period, and the script ends with Mad becoming a success. It also covers the Harvey Kurtzman incident, you know, when Harvey demanded 51 percent, couldn’t get it, and Feldstein took over. 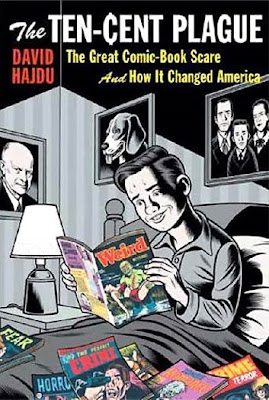 Patrissy's also figures into David Hajdu's new book, The Ten-Cent Plague: The Great Comic-Book Scare and How It Changed America, published this month (3/18) by Farrar, Straus and Giroux. With impeccable research, Hajdu covers reactions to comic books in the 1950s, the impact of Fredric Wertham, Gaines' confrontation with the Kefauver committee and other events we might expect to eventually see dramatized in Ghoulishly Yours. To write this detailed, authoritative overview, Hajdu spent six years interviewing over 150 comic book artists, writers, editors and publishers. The bibliographic notes alone fill 62 pages. An appendix includes the names of hundreds of artists, writers and others "who never again worked in comics after the purge of the 1950s." Surpassing past accounts, this is the definitive history of the comic book controversy and all levels of those involved, from censors to readers.
The clip below shows Bill Gaines  and Mad writer Dick DeBartolo on To Tell the Truth in 1973. DeBartolo was a writer for Match Game and other game shows. During the early 1960s he invited Match Game guests to go on the roof where they performed in DeBartolo's  8mm films. He once had a showing of these films in a Manhattan hotel ballroom.

Comments:
I'll bet that they're sitting in "Patrissy's" italian restaurant, right around the corner from the old EC offices.

I'm looking forward to this film. I hope the get it right.

Good choice, although Hoffman is about ten years older than Gaines was during the EC days.

What was the name of that Italian restaurant you took me to in Carroll Gardens? What a fantastic meal that was, Vince! I still remember it.

The name of the place is Ferdinando's Focacceria, on Union St. between Hicks & Columbia, and it's been there since the dawn of time.

I think of that lunch every time I see your name in print, Bhob.

Here's a photo and review of Ferdinando's Focacceria. Still cozze after all these years.

On a slightly related note, I thought you'd like to know that fantagraphics will NOT be publishing TRUMP & Humbug collections. I wrote them an email asking why news of these upcoming books wasn't on their website, and their reply was that they were cancelled.

Although Trump will not be published, Humbug still will. It's slated for late Summer/ early Fall.

PS: I'm sorry you were given incorrect information. Humbug should be coming out in August.

Thanks for that clarification!