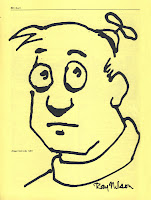 In an article by Dale Killingbeck, Californian Ray Nelson explained how he invented the propellor beanie. It happened in 1947 when Nelson was a high school sophomore in Cadillac, Michigan. He invited some local science fiction fans over to his house, and they had fun taking futuristic hero/alien photos in the style of pulp covers. A hero costume had to be improvised. Nelson remembered the historic occasion, "I said, 'Wait a second,' and I dashed up to my room. In a frenzy, I stapled together a little cap made of strips of plastic and affixed a model airplane propeller to it on a wire, putting a few beads on the wire first so the propeller could spin freely."

George Young, in the hero role, donned the revamped beanie, took it home and later wore it to a science-fiction convention. While visiting relatives in California, Nelson won a contest by designing a character wearing a beanie. Soon, anyone who owned a tv set was watching Bob Clampett's Time for Beany (with voices by Stan Freberg and Daws Butler). ”I never bothered to patent it. I never made a dime off it,“ said Nelson. 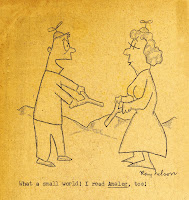 Later, Nelson drew numerous fanzine cartoons with the propellor beanie, as he recalled,"I and other amateur cartoonists began drawing cartoons in which the propeller beanie was the symbol of science fiction the way the yarmulke is the symbol of the Orthodox Jew... It used to be science fiction fans wanted to wear them, but now computer people want to wear them. They are very popular with people out here with Mac computers.“

In addition to Ray Nelson, there was also physicist Sidney Richard Coleman, born in 1937, who wore a propellor beanie. "His mother had to put a beanie with a propeller on him, for when he walked across the street," cousin Rick Shanas said. "He wouldn't be paying attention, he'd just be so wrapped up in his thoughts, that she thought someone might hit him. He'd get noticed with the beanie."

I've long been a fan of Ray Nelson's and was lucky enough to get him to draw for me back when I was publishing fanzines in the 1970s, 1980s and 1990s. He is a fannish treasure. I love his fanwriting and, of course, his cartoons are iconic. I think he's up in the big fannish three along with Arthur Thomson and Bill Rotsler. The three of them defined fannish cartooning. 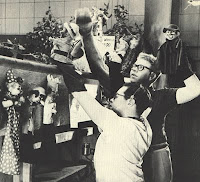 While I recall having read other accounts of how Ray "invented" the propeller beanie, I don't think I ever heard the part about the Time for Beany contest before, but I just may have forgotten it over time. That's pretty cool, if it's true. All the histories I've found mention the television show starting on February 28, 1949, which means the puppet was built by that time. Ray says that he thought it up in Michigan in 1947, so the time frame is correct. He would have had to visit his relatives in California sometime in 1948 to enter the contest. And since Time for Beany was initially shown on local LA television, his relatives had to have lived in the Los Angeles area. Also possible. I know he has always been acknowledged for having introduced the propeller beanie into fandom and made it the symbol of fannish fans. It was widely being drawn by several fan cartoonists by the late 1950s--like Bjo, LeeH Hoffman, Dave Rike and ATom--as well as Ray.

Dick Eney's Fancyclopedia 2 (1959) doesn't have an entry for the Propeller Beanie, but it does have an entry about "The Beanie Brigade," which credits Bob Bloch with giving that nickname to a group of young fanboys who were running around the 1949 worldcon, Cinvention (Cincinnati, Ohio, September 3-5, 1949). Bloch called them "an army of goons wearing beanies, false beards and Buck Rogers blasters." The entry intimates, however, that this "army" may have been nothing but two fans--Art Rapp, who wore a large fake beard to the con, and George Young, who wore a propeller beanie.
Young is the fellow in the photograph that accompanies Ray's article about inventing the beanie. And I suspect that the photo was probably taken at the Cinvention, and that the beanie he's wearing is the same one Ray made and gave to him.
--Dan Steffan
To purchase the Levitating Propellor Beanie, go to Archie McPhee. Don't miss Dan's superb article on the magnificent art of Ronald Clyne.

Comments:
Neat account of the propellor beanie.
Robin White made me a propellor beanie, in the 70s I think, and after a while I found a battery-powered spinning bowtie. I never could see how that would - there's too much in the way where a bowtie goes - but it was easily converted to spin the propellor. It used a control box with one C-cell. I let my hair grow over my collar to hide the wire and wore it to a con.
Ned Brooks