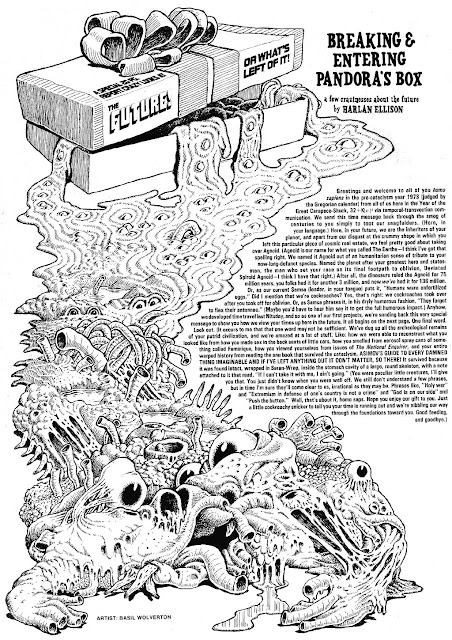 ©1973 Marvel Comics Group
This is a page from Marvel's Crazy #1 (October 1973). I had nothing to do with Crazy, but I was the instigating art director of these disemboweled, glutinous guts in slimy seepage from the fertile brain of Basil Wolverton.

For the full story, we must jump back five years earlier to Brooklyn in 1968, when I was on the staff of Topps Chewing Gum's Product Development Department. (See previous Topps posts.) With telephone and correspondence, I supervised Wolverton on a product with the working title, Ugly Posters. To get the project underway, I first wrote descriptions of curious characters and strange situations for a full line of posters.

Usually we began a product by creating cartoon roughs, but it was felt that this was not a good idea with Wolverton. We didn't want to box him in or somehow limit his imagination. Instead, Wolverton would send in small pen sketches of his convoluted concepts based on my short descriptions and pun-filled premises. When his roughs were approved, he would go to work on a large inked drawings. By this point in his career, he had switched from flexible pens to working with a Rapidograph (which might be evident if you make a close comparison of the lines with details in his earlier drawings). As I recall, he did about one complete poster a day for almost a month.

When the finished artwork came in, I created the color guides. Using color markers, I inserted the original art into a layout pad with backing on sheets that prevented marker ink from bleeding through the paper. Then they went to the Production Department for finished borders and display lettering. After that, the posters were printed for test marketing.

One of the drawings was rejected. I had written a description of an eyeball floating in a viscous fluid leaking from a gift package with ribbons. As you can see, Wolverton carried that idea to the very edge with an image so wild that the Topps executives chose not to print it. It went into storage. How it eventually arrived at Marvel Comics is something I never knew, but it probably came about because Topps editor Len Brown was friends with Marvel editor Roy Thomas.

Lastly, a copy of the art went to Harlan Ellison to write the science fictional runaround copy, and Harlan may never have known this artwork originated at Topps. I guess it's sort of like Frazetta's Buck Rogers art that was reworked to become a cover for EC's Weird Science-Fantasy (which I previously covered as ''The Rhythmic Bestiality of Frank Frazetta'' on August 12, 2008).