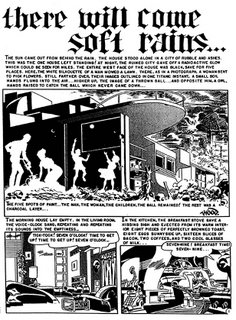 Wallace Wood: Against the Grain, part 25 Hours were spent on research. EC’s assistant editor Jerry De Fuccio, who handled much of the research for Kurtzman, recalled, “I knew I was a real veteran when I was given a cast iron model of a Mauser to bring to Wally’s house in Forest Hills. I was on a crowded subway platform; it fell out of the paper bag, and I picked it up very casually.” For “Gettysburg” (Frontline Combat 2) Wood did on-location research: “I went to Gettysburg, and I came back and started to work on the story.” There was a study of Victorian architecture for “Mars Is Heaven” (Weird Science 18): “I wanted to have that period look of that time, you know, the decorating... I did a lot of research for ‘There Will Come Soft Rains’ (Weird Fantasy 17, 1953), everything that looked remotely like futuristic settings. I probably worked harder on that story than anything I ever did.”  ¶ 9:39 AM 0 comments 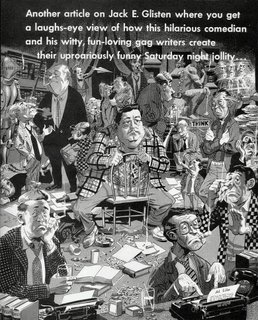 Wallace Wood: Against the Grain, part 24 EC launched three new titles in 1951-52—Frontline Combat, Shock SuspenStories and Mad—and Wood contributed to all of them, in addition to his work on the 1952 “Outer Space” Spirit series. Surely Wood, as he labored through the 1952 nights, never imagined that one day he would be taunted by the phrase “the old stuff was better.” Work displaying an extraordinary control and complexity began to pour from his brush, but even as readers gazed in awe at this intricate detail, never before seen in comic books, Wood was already considering another approach: “Sometimes I would look back on a job after a couple of months or so and realize that it was cluttered as hell. It was a real effort to simplify it and work out my design.”  ¶ 8:49 AM 0 comments 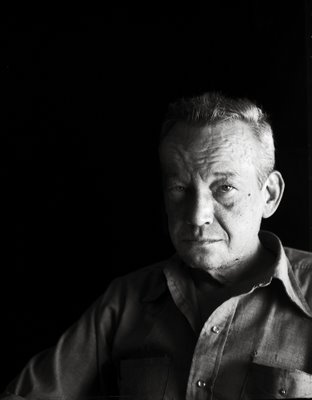 Wallace Wood: Against the Grain, part 23 Woody and Tatjana also worked together to create the Christmas cards, colored by Tatjana, that they mailed out each December throughout the 1950s and 1960s. “I always hand-colored our Christmas cards. After we split up, I made two of my own. He and I would sit down, thinking of ideas, and I’d suggest something, and he would say, ‘That’s no idea.’ And I said, ‘Draw it!’ He would draw some, and it was an idea. We had them printed, and I hand-colored all the cards. For a few we made linoleum cuts and printed them ourselves. But most I hand-colored.”  ¶ 9:53 AM 0 comments