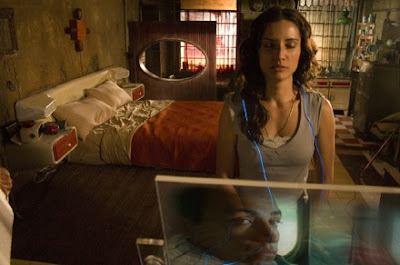 Sleep Dealer clips
Sleep Dealer takes place in a near future when the minds of workers are linked into a global computer network. Despite the wall along the Mexican border, the U.S. allows the outsourcing of virtual labor through node workers operating remote-control robots. In Oaxaca, a private company hijacks the water supply of a small village, selling the water back to them at a higher price. Memo Cruz (Luis Fernando Peña) lives in that isolated village, but he dreams of working in Northern high-tech factories. He builds a transmitter that allows him to tap into international signals, but his life changes when this transmission is intercepted and the signal is traced back to him. On a bus to Tijuana, he meets freelance writer Luz (Leonor Varela), who later sells her memory of meeting Memo to an online memory-trading service. After she installs nodes in Memo's arm, he is able to get a job at the virtual labor sweatshop Cybracero, a factory where workers are plugged in to keep remote-control robots functioning throughout the world. Later, sitting at Luz' computer console, he is angered to discover she has been selling her memories of him. 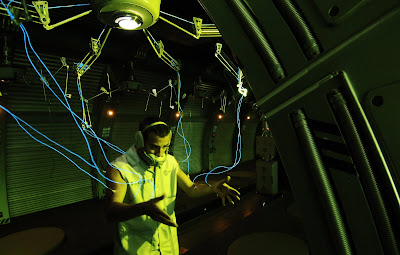