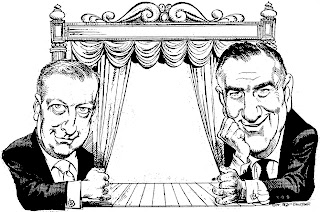 I spent months trying to find out why Bob Elliott's character Tex Blaisdell had the same name as the cartoonist Tex Blaisdell. I emailed people who worked in Blaisdell's studio overlooking Carnegie Hall. I asked OTR experts. I spoke on phone with Blaisdell's daughter. No one knew. I finally asked Bob Elliott, and here's his response.