Potrzebie
Monday, April 09, 2012
Wood Chips #43: Jungle Jim .
Here's another of the Jungle Jim stories I wrote for Wally Wood. His only suggestion for this story was to use a giant rat. Jim's feverish line "Rats... thousands of rats" is an allusion to the "Three Skeleton Key" episode of radio's Escape. Scroll down for more background info. Click on bottom label to see the other Jungle Jim stories. 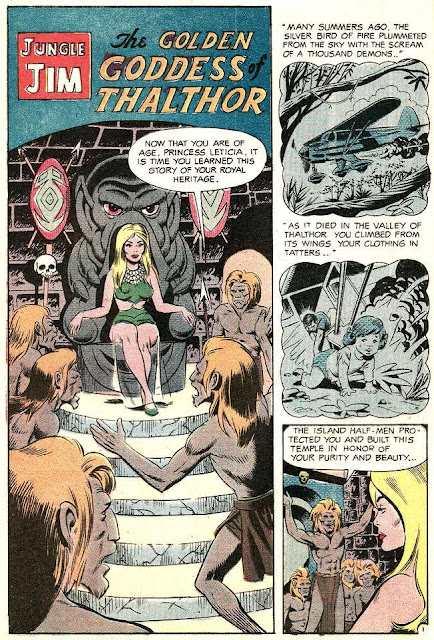 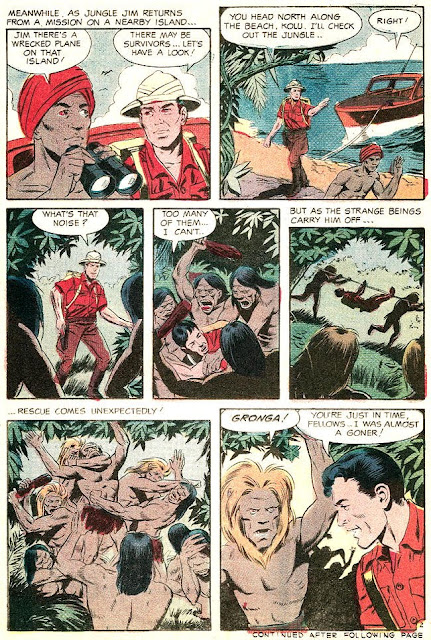 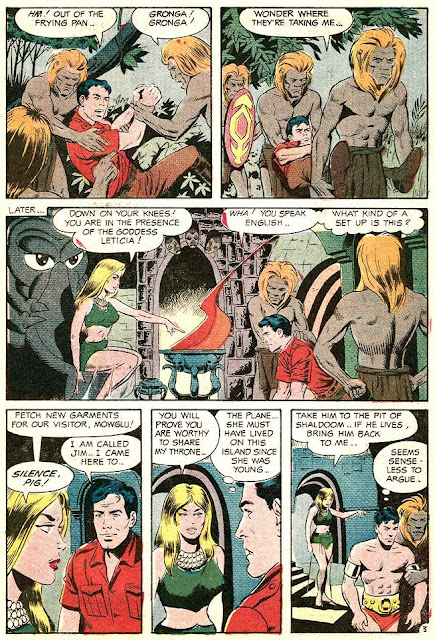 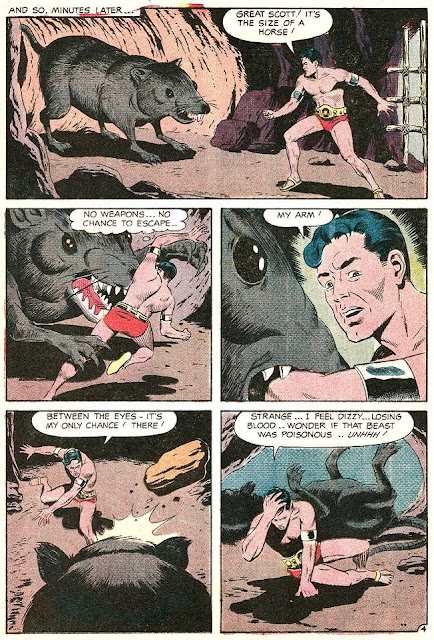 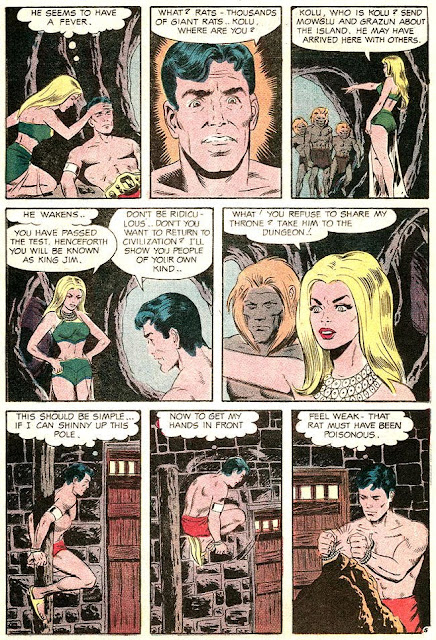 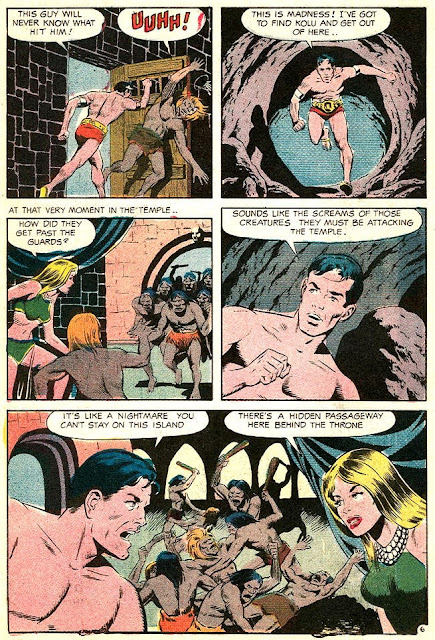 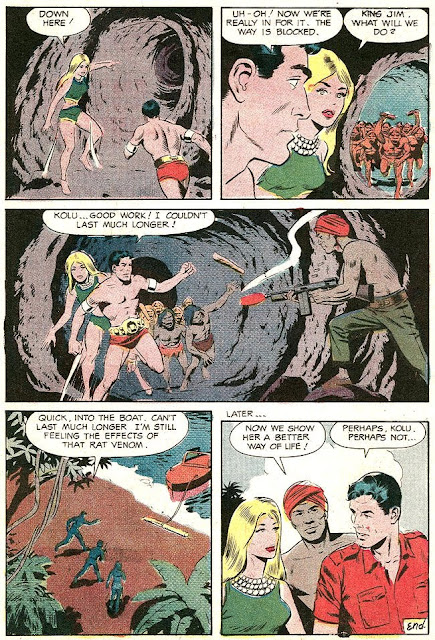 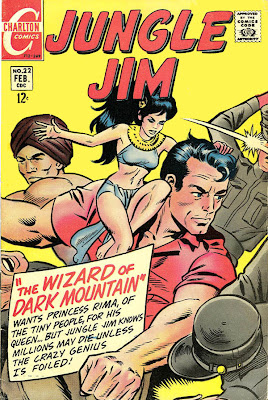 In 1966, King Features began a division to publish comic book adaptations of their more popular strips, including Mandrake the Magician, Beetle Bailey and Flash Gordon.

Juggling jobs and temporarily minus his regular assistant, Ralph Reese, Wally Wood faced a sudden two-week deadline on a Jungle Jim comic book for King Comics. Nothing had been done. His solution to the problem, I was told, began with me. I was to write three Jungle Jim stories in two days, he told me. In 15 minutes, he outlined how to do it: Draw roughs on typing paper, begin each story in the middle of an action situation, write as few captions as possible (so the pictures tell the story) and use conventional panel layouts rather than sprawling, tricky page designs.

With no time to research the original Alex Raymond characters, I resorted to a near-satiric approach based on a hazy, half-buried recollection of the early 1950s Johnny Weissmuller Jungle Jim film series. Wood made only a few changes, eliminating the more obvious satire in certain lines of dialogue, and then he immediately sent them to prolific letterer Bill Yoshida (1921-2005). I gathered that Yoshida had an assembly-line approach, constantly lettering while his children traveled around the city delivering and picking up pages.

“The Wizard of Dark Mountain” is obviously inspired by my memories of Dr. No (1962). Wood turned that one over to Steve Ditko, who followed my rough layouts with such precision that he carefully included every detail. I saw that he had made a few slight alterations and improvements. On page five, panel five, I had Jungle Jim holding Rima’s ass as he gave her a boost into the ventilating shaft; Ditko gave it a simple change to make it acceptable to the King editors. On page three, panel four, my rough of the trio rock climbing was awkward, and he easily solved the problem by repositioning the characters.

Wood gave “The Golden Goddess of Thalthor” to Tom Palmer, and I arrived at the West 74th Street studio while Wood was looking over Palmer’s penciled pages. Wood said, “His drawing looks like Archie, Betty and Veronica, but since he told all the kids in his neighborhood that he’s now a famous comic book artist, I can’t bring myself to reject this. I guess I’ll give him a chance to redraw some of it.”

A few nights later, I learned why Wood had expressed little concern for the tight deadline. Artists from all over the city converged like cockroaches to his two-room studio. Someone sat in every available inch. I walked over and said hello to Roger Brand (1943-1985), who looked up and said, “Hi! I’m drawing your story.” As he completed pages of “The Witch Doctor of Borges Island”, they were passed to Dom Sileo and other inkers—who were adding finishing touches to all three stories. Wood, at his drawing table, meticulously inked faces for a while and eventually vanished. He returned shortly with his wife, Tatjana, grinning as he showed her the white heat of activity, leading her into that maelstrom of streaming Winsor & Newton Series 7 brushes and flowing India ink.

With a few phone calls, Wood had contrived to recreate the mood and atmosphere of a 1940s comics shop. It was an exhilarating evening, one that he obviously enjoyed manipulating as much as I enjoyed seeing panels springing to life exactly as I had designed them.

I had completed one more script when Wood phoned to explain that King Comics had decided to withdraw from publishing comic books and had passed all materials to Charlton. Wood dropped out, and Pat Boyette (1923-2000) took over the book, illustrating scripts by Joe Gill. My last Jungle Jim script was “The Black Blossoms of Death,” an attempt to do a Lovecraft-type tale. It was illustrated by Boyette in Jungle Jim #23.