These are sample strips for a planned 1990 revival of Li'l Abner that never happened. The artwork is by Steve Stiles, and as evident here, he did a stellar job in capturing Capp (with a few Bill Elder flourishes), faithful in all aspects from layouts to inking.

The writer was Norm Hochberg, who launched the project. His father was the lawyer of the Al Capp estate, and through him, Hochberg was able to get permission from Capp's widow and brother, Elliot Caplin, to resuscitate the strip. Hochberg asked Dennis Kitchen for suggestions on a suitable cartoonist.

Steve Stiles recalls: "I wasn't the only one contacted, but I don't know who the others were. I was given a script for a four-panel sequence involving Joe Btfsplk. There was a 'bake off' that was judged by five or six cartoonists, one of whom was Scott Shaw. After I was selected, I was supplied with a big stack of b/w Xeroxes of Li'l Abner for reference, and Dennis was kind enough to send me some of his reprint volumes gratis. The strip would have been distributed through the Southern United States, plus Latin and South American papers." 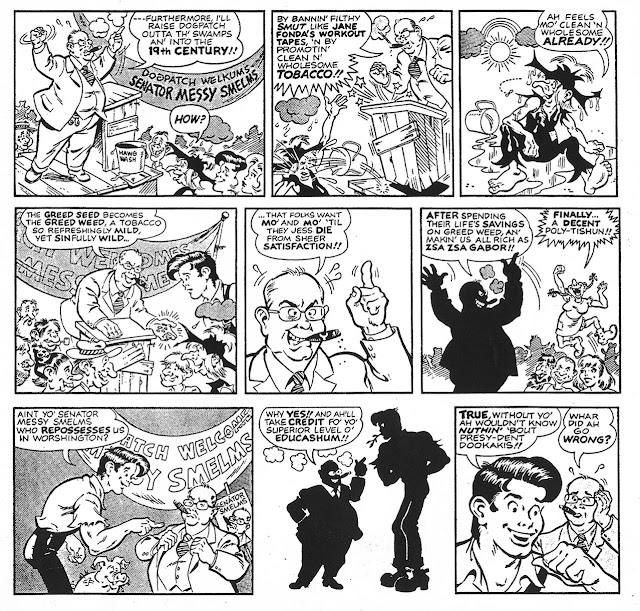 Steve continues: "As for the demise of the project, all this I got secondhand through Hochberg, so I don't know how true it is. Supposedly, with ten days before the contract was due to be signed, Capp's daughter, Julie, got wind of the project (I don't know where she was during all this) and talked her mother and uncle into withdrawing permission for the revival."

"I was 13 when I first decided to become a cartoonist. My father came to an undeniable conclusion: I had lost my mind. He stuck to that idea with barnacle-like tenacity, ignoring whatever project I was working on, regardless of subject matter. The only response I would invariably get was. 'If you have to do this kind of stuff, why don't you do something like Li'l Abner?' So you can imagine my feelings when, in 1990, I was offered the chance to draw a proposed revival of Li'l Abner."

"Dad had passed on by that time, but, whoa, what an opportunity for closure! On the other hand, Al Capp had shuffled off this mortal coil, too; if there is an afterlife, what sort of reception could I expect from Mr. Capp when it was my turn to trot through them Pearly Gates (or wherever)? Does The Afterlife have health insurance? I needn't have worried; after working up three weeks worth of daily Dogpatch continuity, the project went belly up for reasons beyond my control."

"Aside from the (pant, pant!) thrill of getting to draw Daisy Mae for three weeks, a major perk on that job was the ten years worth of Li'l Abner strips I was given for reference, providing me with many months of chortles, grins and guffaws. When it comes to comic strip laughs, Al Capp is *The Man*, bar none."