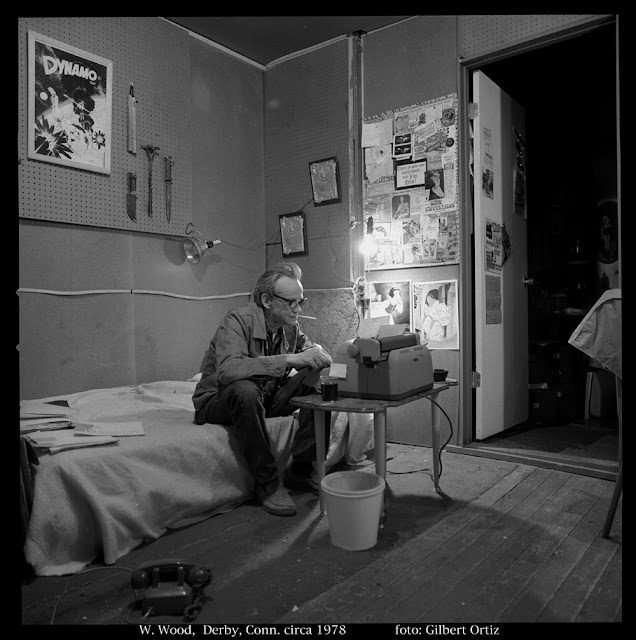 Below is another Daniel Clowes interview (Brattle Theater, May 4, 2010) discussing the Gilbert Ortiz photo of Wally Wood in his Derby, Connecticut studio. During his slideshows, Clowes did not make it clear that this small studio was just outside a two-story house where Wood lived at the time.

Gilbert describes the circumstances of this 1978 photo: "I was on my way to Boston, when I stopped off to visit Woody. It was a sunny day outside. In fact, the foto of Wally outside with the cup of java is right outside this studio. From what I remember, that was the only door. When we got inside, Wally sat down on his daybed to write something on his typewriter. Observing this, I stood back and took this shot. Woody was not big on idle chit chat. If he had something to say, a lot of times he would type it out and send off a letter or a short note. I remember receiving quite a few 'Words from Wood.'" 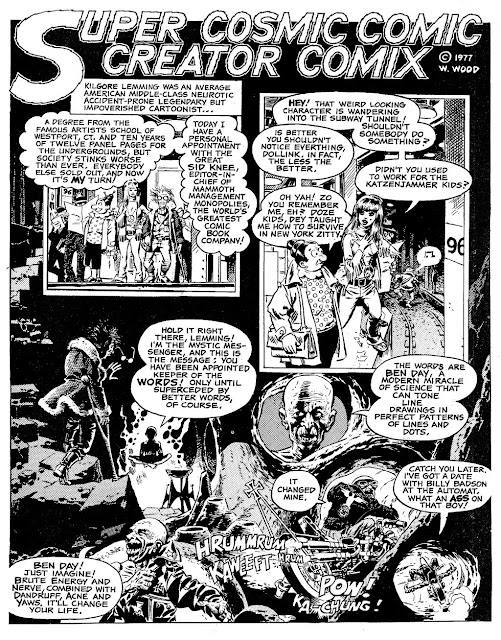 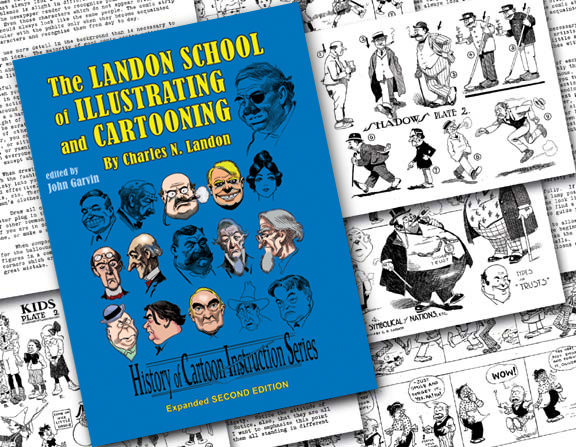 John Garvin's documentary on early comic strips and the Landon School of Illustrating and Cartooning. Why doesn't the History Channel do a coverage of comic strips as good as this? For Garvin's PDF reprint of Landon's course, go here.

Cartoonists who took the Landon course:

Tuesday, June 21, 2011
Salvaged from the Realist Archive Project, here are my 1965 drawings of Dick Gregory, Woody Allen and Steve Allen. I'll forego my usual background notes on my work because I actually only have a vague memory of doing these. I do know that of all my contributions to The Realist, this was the only time Paul Krassner gave me an assignment to do portraits. Perhaps Bruce Stark was an influence here. As I recall, Stark did regular single column ink portraits during the 1960s for the Daily News in addition to his caricatures and sports cartoons. He was a staff artist at the Daily News for more than two decades. 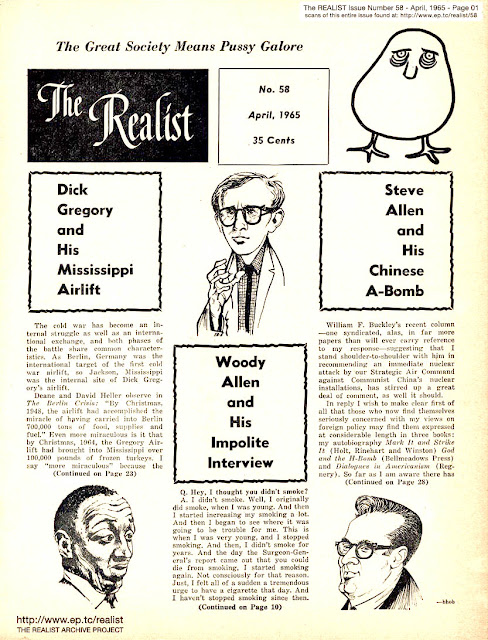 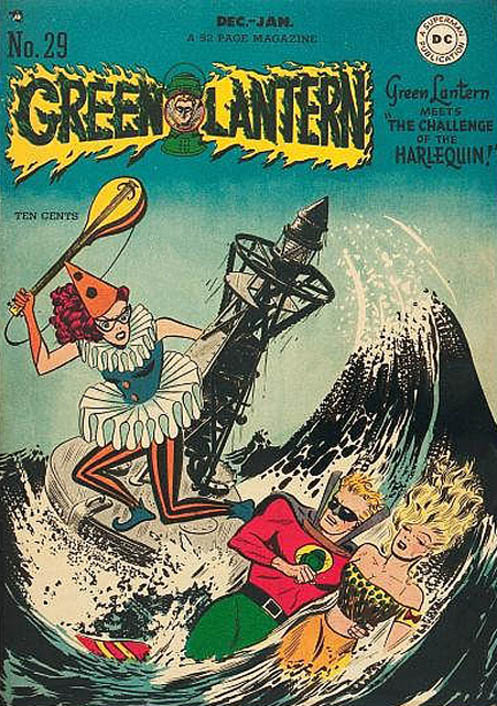 Irwin Hasen's cover for Green Lantern #29 (December 1947). Below is his painted recreation of that cover. 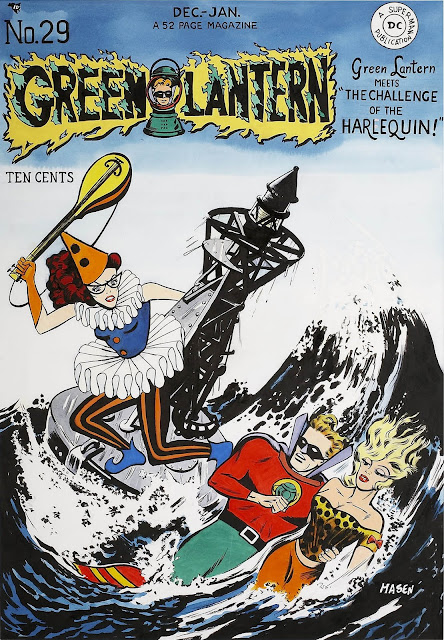 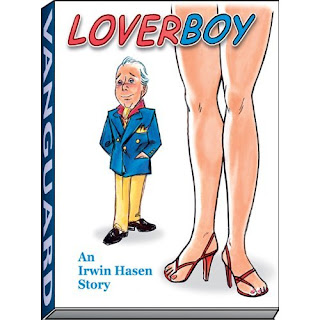 Irwin Hasen's autobiography, Loverboy (Vanguard, 2009) was written when he was 91. Below is "Wildcat", the character he created with Bill Finger for Sensation Comics #1 (January, 1942). In 1961 and 1962, he received the National Cartoonists Society's Newspaper Comic Strip Award for Dondi, which he created with Gus Edson in 1954.

I spoke with Irwin not long ago while trying to solve the Tex Blaisdell Mystery. Bob and Ray's Western character, Tex Blaisdell, was around in the early 1950s, but why did they give him the same name as the cartoonist Tex Blaisdell? The leading experts in vintage radio couldn't give me an answer and neither could Blaisdell's daughter, Barbara. It's an enigma wrapped in a comic strip. 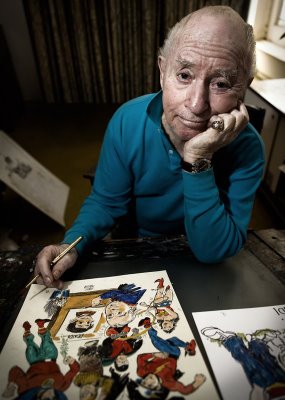 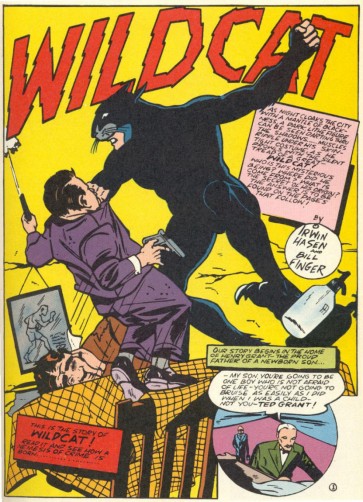 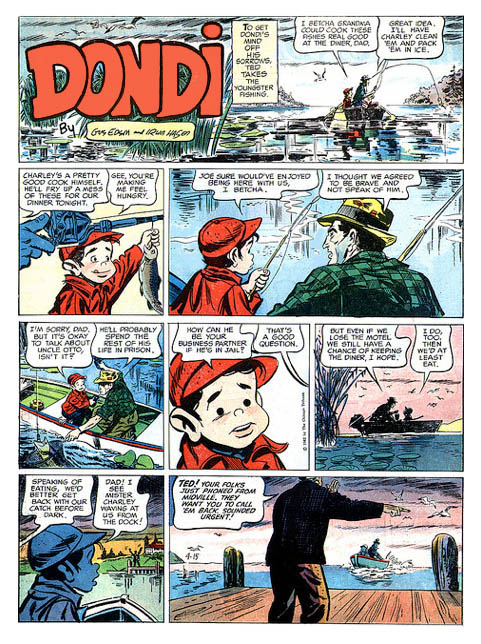 For NY Graphic's interview with Irwin Hasen, go here. Below is Dondi on a plaque in Gus Edson Park (Stamford,Connecticut). 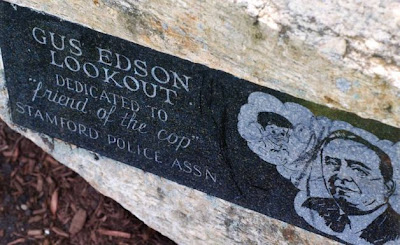 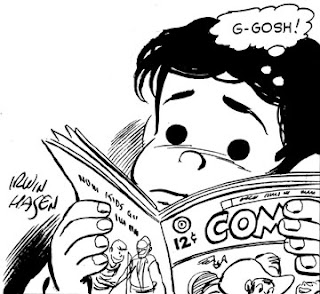 Saturday, June 11, 2011
Sgt. Pepper's Lonely Hearts Club Band .
This is a collage I did in the summer of 1967 for Paul Williams' Crawdaddy. At the end of 1966, Paul moved Crawdaddy from Cambridge to New York. He was living on Jane Street, one block away from me, and he had his office on Sixth Avenue in the same building as the Folklore Center. As I recall, Sgt. Pepper's Lonely Hearts Club Band was released in June, just as Paul finished paste-ups for his July-August issue (#10). So with no time or space to review the album, he asked me to do a "visual review" overnight.

It must have been rushed because only two songs are referenced, and the images have nothing to do with the Beatles. Instead, we see stills from Bewitched and Fellini's 8 1/2, plus the muted post horn from The Crying of Lot 49. I can't recall why I drew the flying locomotive or that free association; it's probably clipped from something else I had drawn. Maybe the asterisk devices are supposed to be diamonds from "Lucy in the Sky with Diamonds". The central block of copy was added by Paul or someone after I turned in the art. 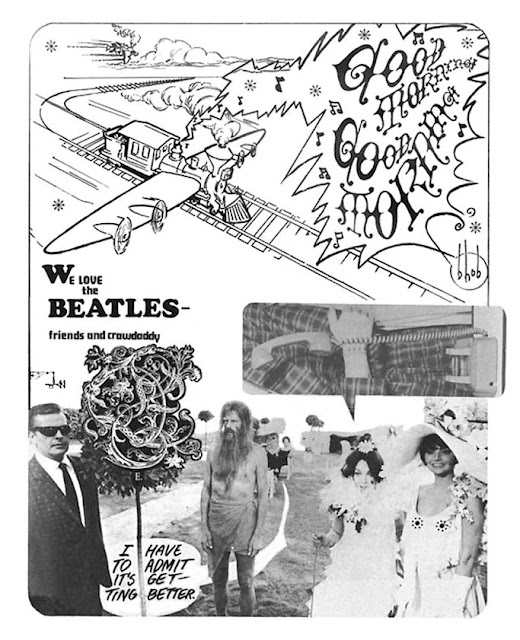 For two separate pages in Crawdaddy #11, in an effort to tune in to the spirit of the magazine, I did this lettering, obviously influenced by Rick Griffin. 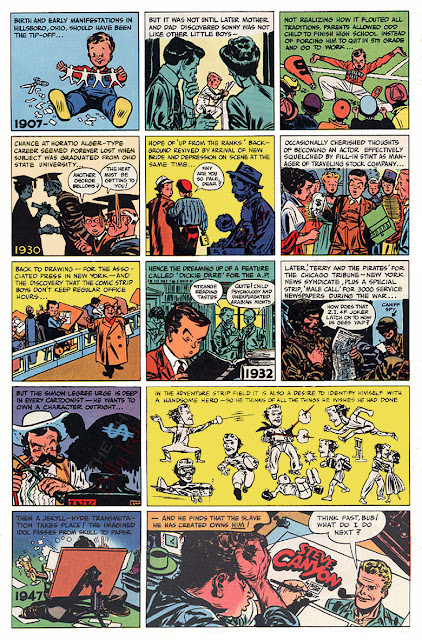 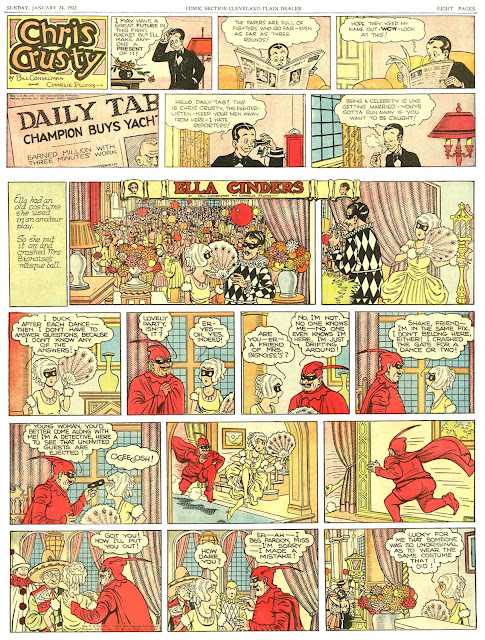 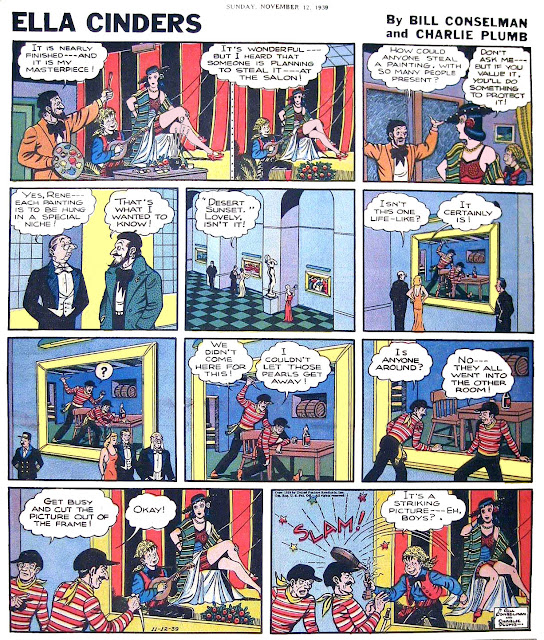 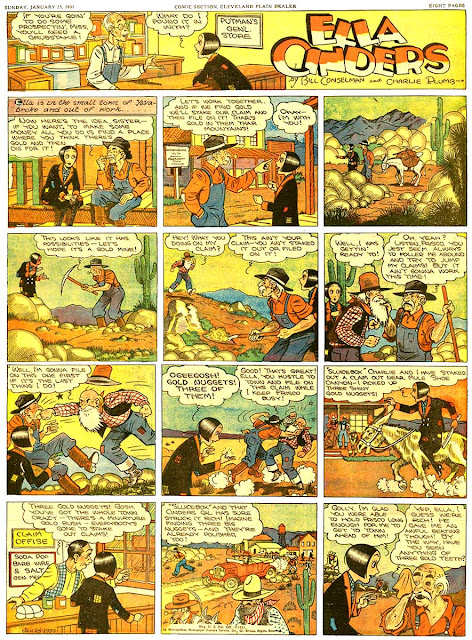 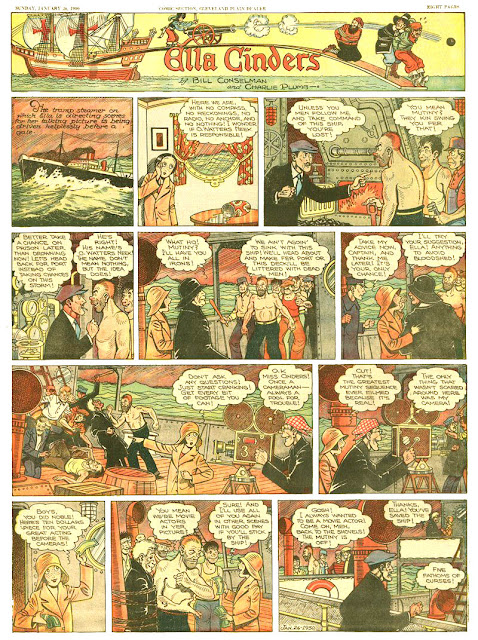 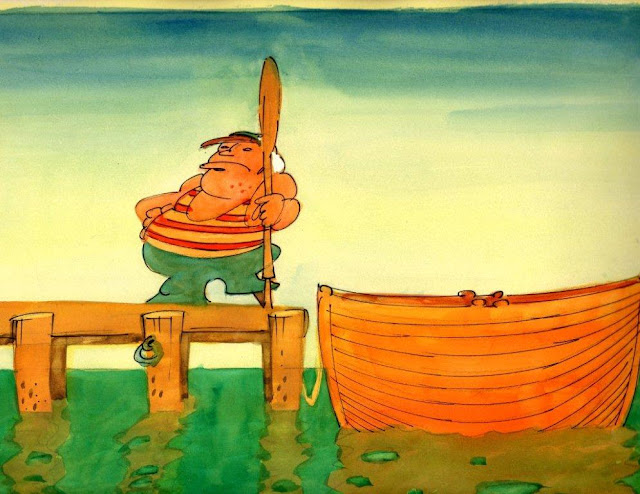 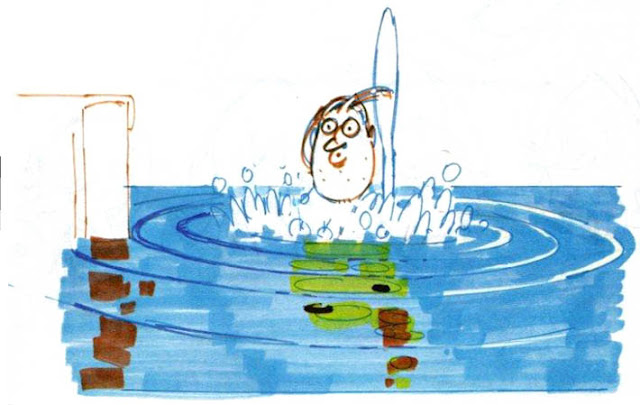 Friday, June 03, 2011
Wood Chips 34: High school poster .
When Wood was in high school, he drew this surreal sophomore dance party poster. Notice his signature on the grass in the upper right. We featured this poster in the color section of the Against the Grain hardcover. Although the poster promises "fun" a half-dozen times, it actually conveys a quite different feeling, a fearful foreboding and a dark dance, perhaps similar to the Carrie prom night. 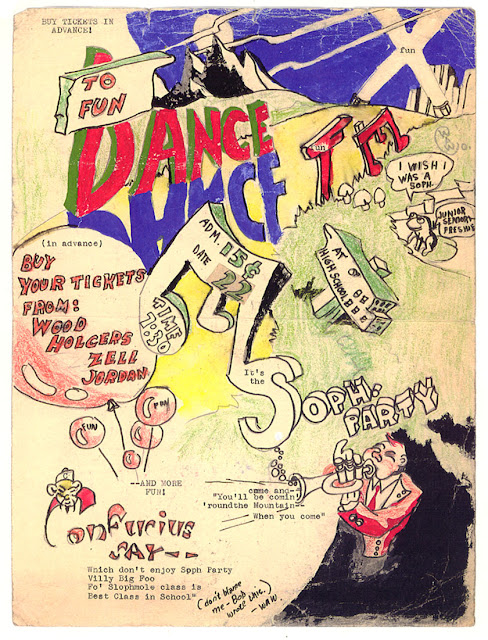