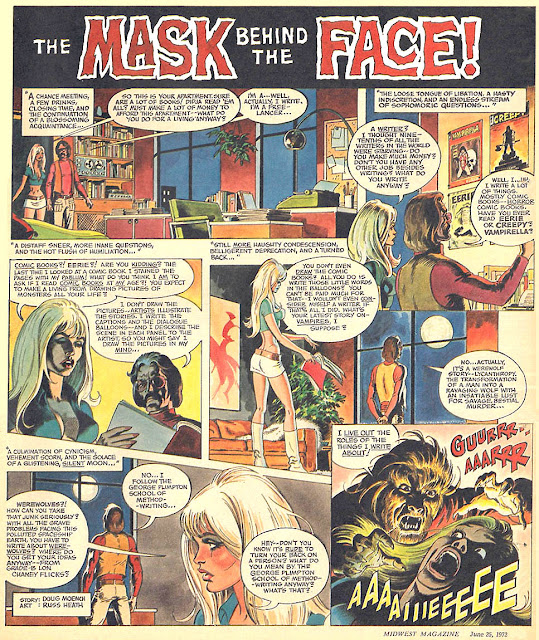 In the early 1970s, Doug Moench worked the graveyard shift at the Chicago Sun-Times handling the teletype machines from one am to nine in the morning. As the clacketing machines churned out copy, filling the floor with teletype paper, Moench wrote his scripts for Creepy and Eerie, beginning with "Snow Job" in Creepy #29 (September 1970). Not long after dawn, he would distribute the teletype stories to the news desks and then go home to sleep.

When Moench saw Roger Ebert in the hall, he told him a piece he had written about the Warren magazines had speculative guesswork and was somewhat off the mark. Ebert said, "Who are you?" Moench said, "I write those stories!" Ebert then introduced Moench to Richard Takeuchi, the editor of the Sun-Times' Sunday magazine, Midwest, and suggested to Takeuchi that he have Moench write a piece about scripting for Creepy, Eerie and Vampirella.

Moench's article, "Confessions of a Ghost Writer", appeared in the June 25, 1972 issue of Midwest, accompanied by a full-color comics page, "The Mask Behind the Face", scripted by Moench and illustrated by Russ Heath, who felt he was being paid so well that he should deliver a full painting. It appears here in color for the first time since 1972. A b/w version was published in The Warren Companion (TwoMorrows, 2001). Before heading for New York to write for Marvel and DC, Moench contributed several other articles to Midwest in 1972-73. When one of those articles, a stream-of-consciousness reflection on violence in the Chicago subway system, was nominated for a Chicago Newspaper Guild Award, the entire Sun-Times staff, cued by syndicated columnist Bob Greene, broke into applause as Moench walked through the city room.