Potrzebie
Wednesday, December 01, 2010
VIP ad gnawseum .
In the 1940s and 1950s, Virgil Partch was my favorite magazine gag cartoonist. I loved his surreal world, angular characters and literal visualizations of common phrases. When he was killed in a 1984 automobile accident, I decided I had to write a lengthy article to let young people know about Partch's peak years. It was published a year later in Nemo 14 (August 1985). In the course of researching the article, I discovered that Partch had drawn the same situation at least five times. So I grouped them together. 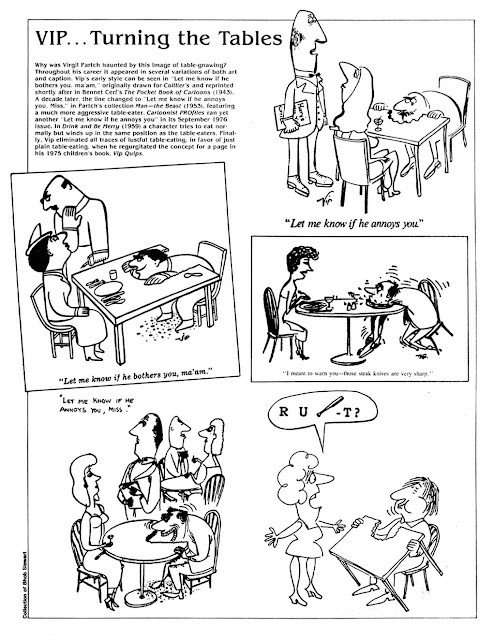 Comments:
Thanks for these -- fascinating stuff! And for the 2nd time this week, I HAVE TO post a link to your blog from my blog! Keep on blogging, Bhob!

Interestingly, Partch once appeared on You Bet Your Life with Groucho Marx. When Groucho found out he was a cartoonist, he asked for a sample of his work and Partch described the table gnawing scene and quoted the pay-off line. Groucho stared at him for a moment, then said something like, "And you make a living at this, do you?" It's been more than thirty years since I saw that episode, but the pay-off I remembered was "Is this man annoying you?" However, as I say, it's been a long time since I saw it. I didn't even know who VIP was at the time!

Maybe that's in the YOU BET YOUR LIFE YouTube clips, but too many to search through.