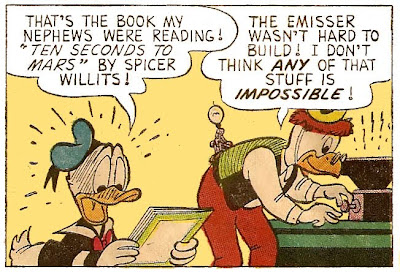 By the time Carl Barks reached the age of 60, his identity was still unknown to the readers of Walt Disney Comics & Stories, even though his work had been published in that title since 1943. He was simply known as the Good Duck Artist to his readers. 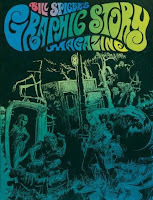 However, in 1959, John and Bill Spicer wrote to Western Publishing and received an answer from editorial associate Zetta DeVoe who gave them Barks' name and address. They were unaware that movie memorabilia collector Malcolm Willits was also tracking Barks' identity that same year. Barks first heard from one of his readers in April 1960 when he received a letter from John Spicer. (See below.) In the summer of 1960, the Spicer brothers traveled to visit Barks at his home in San Jacinto, 75 miles east of LA.

A year later, Barks gave a printed salute, inserting the names "Spicer" and "Willits" into a panel in Walt Disney Comics & Stories #249 (June 1961). Meanwhile, because of their discovery and contact with the cartoonist, the name Carl Barks was becoming known throughout the land beyond Disneyland. And a few years later, Bill Spicer began publishing Graphic Story Magazine.

Believe it or not, I have been planning this letter for about four or five years. I have been kept from doing so for the simple reason that I knew not your name or address. I tried several times, however, but all were in vain. I recently moved from Los Angeles to a small burg on the Monterey Bay (Aptos). During this move I hit upon a somewhat unscrupulous scheme (to put it frankly, a big fat lie) for getting this information, and it worked!

Now you're probably wondering why I'm writing this letter. The reason is: I admire you, or better put, your work. Like most kids, I bought and read comic books when I was young (I'm 16 now). I started collecting comics about 1950 and I collected everything. Throughout the years, however, my collection has dwindled down to a point where it could be referred to as a collection of your works. I have every Uncle Scrooge ever printed, and all the Walt Disney's Comics from 1950. I also have W.D.C. in the years of '44, '45, '46, '47, '48, and '49, but they are not complete. All this plus several D. Ducks in the older years make up my collection.


If I may say so, you are the best comic book artist I've ever seen! Your work stands out among the rest. Your work employs art, imagination, and humor which brings the comic book to an intellectual level. I notice that a number of your stories are based on real history. Are you a historian, or something? I have checked up on many names, dates, and places in your stories (for example: Francisco de Ulloa and the Seven Cities of Cibola in 1539) and have found that they are usually true!


Have you ever lived in the Burbank-Glendale area? In many of your stories Burbank is mentioned. Come to think of it, though, in one of your later stories the 'Riverside County Relief' is pictured, and I think San Jacinto is in Riverside County?


Here are some questions: Have you been drawing W.D.C. since they began in 1940? When did Donald Duck Comics begin, and what years did you draw? Do you have complete collections of the previous mentioned? Do you have any you wish to sell, or know where I could get old issues? Have you done any art which has been published other than W.D.C., D. Duck, and Uncle Scrooge?


Well, this is about all I have to say. By the way, I have a brother who lived in Glendale and is somewhat of an artist himself. Like I, he enjoys your work. Also, he has an almost complete collection of old rare E.C. Horror, Science Fiction, etc. comic books, if that's any interest to you. It is possible that you might get a letter from him, I don't know. I would appreciate it if you wrote me, if only to answer my questions. Thank you... 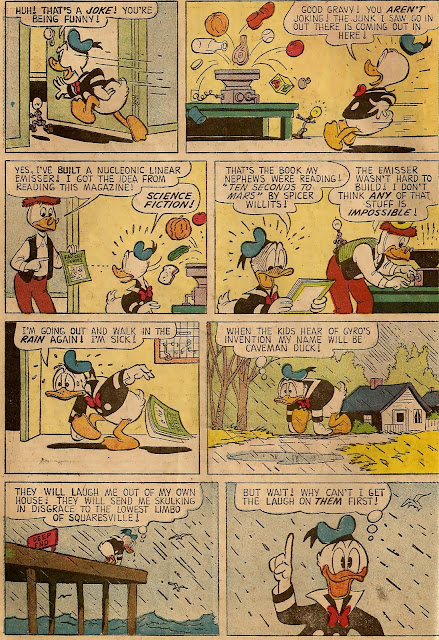 Wary of a prank, Barks replied a few weeks later:

After eyeing your letter with dark suspicion for several weeks, I have decided to answer it on the assumption that it could be a genuine fan letter.


You see, I have a friend in Oceanside who just loves to play practical jokes, and writing phony letters to his chosen victims is one of his jokes. It so happens that your letter and his letters to his chosen victims seem to have been written on the same typewriter, there being a number of remarkable mechanical similarities. Also, the location of Aptos, only two putts of a jaguar from Carmel Valley, where Dennis the Menace's gang have their workshop, lends fuel to the suspicion. My friend writes gags for the daily and Sunday Dennis newspaper feature. His name is Bob Harmon, and if the name of John Spicer happened to fit one of the Dennis artists at Carmel Valley, I wouldn't be a bit surprised.


But, as I stated above, I'm going to write this letter on the assumption that John Spicer is a genuine, on-the-level young man with a better than average discerning eye for differences in art and writing styles. Ninety-nine readers out of a hundred think Walt Disney writes and draws all those movies and comic books between stints with his hammer and saw building Disneyland. It is a pleasure for us ghost writers and artists to meet an occasional sophisticated person who knows that he doesn't quite.


I might be justified in wondering how you know my stuff from the other guys' work, but I have met people before who know that difference, and not all of them professional comic bookers. I always try to write a story that I wouldn't mind buying myself. Maybe that is what distinguishes it from the writings of those who try only to get a story past the editors.


You ask some questions. I shall try to answer them:


The historical dates used in many stories are dug out of the Encyclopedia Britannica. I like to use long ago locals and gimmicks. They have a built-in reader interest, inasmuch as most young people study about them at some time of their school work.


Yes, I've lived in the Burbank-Glendale area. North Hollywood and Los Angeles, to be exact. Worked 7 years at Disney Studios in the story department. Was one of the mid-fathers at the birth of Huey, Louie, and Dewey, but not Donald. He was before my time. I've lived in San Jacinto, in Riverside County, since 1942. The climate is better here than in smoggy L.A.


W.D.C. used only reprints of newspaper comic strips in its first few years. Their first original stories using Donald Duck in 10-pagers began in 1943 I believe. The first one may have been the story of three crows trying to eat Donald's garden (April 1943). I did the drawing on that, but not the scripting. All but a few of the 10-pagers since that date have been my product, script and art.


Donald Duck Comics began as a one-shot in 1942 called Donald Duck finds Pirate Gold. I did part of the art on that one, but none of the writing. The second one was Donald Duck and the Mummy's Ring, in 1943 - all mine. The Donald Ducks appeared irregularly as one-shots until around 1950 or '51 when the book went on a regular publication of every second month. I did most of the art and stories during those early years. Some of the titles: Frozen Gold, Volcano Valley, Terror of the River, Ghost of the Grotto, Christmas on Bear Mountain (in which I invented Uncle Scrooge), The Old Castle's Secret, Sheriff of Bullet Valley, The Golden Christmas Tree, Lost in the Andes, Voodoo Hoodoo, Luck of the north, Ancient Persia, Pixilated Parrot, The Magic Hourglass, Big Top Bedlam, Dangerous Disguise, No Such Varmint, Land of the Totem Poles, In Old California, Christmas in Shacktown, The Golden Helmet, The Gilded Man.


You say you have all the Uncle Scrooges ever printed - good! Glad to meet a customer. There are some bad spots in some of those stories that I wish could have been done over. The climax fight in the recent 'Paul Bunyan' theme could have been improved with a half-page spread of Scrooge's and the B. Boys' giant machine hacking each other to pieces, but I was afraid the editors would delete such a scene as being too violent. The 'Larkies' in the story of The Golden Fleece had to be so named because the editors objected to Harpy, a 'Harpie' being a slang version of street walker.


I have done very little in art or writing that hasn't been for the Disney Studios or Western Printing and Litho.


Concerning extra copies of old W.D.C.s etc. I have only one copy each of most of the older issues. None for sale or trade at this time, I'm sorry. I sometimes meet a kid who has a collection going back to Adam. Next one I see, I'll give him your address, in case he is willing to trade.


Well, it was nice getting a fan letter. The front office tells me they get many letters, but over the past 17 years they have shown me only three. Two of which were pan letters that left me cringing for weeks. I suppose it's just as well I don't get much mail. Writing and drawing these comics is a full-time job 7 days a week. I would have little time to answer.


If in the future you notice a dropping off in quality of my stories, don't be surprised. The mind is not a bottomless well of new ideas, and mine is about pumped dry. Recently I have re-vitaminized some of my old plot formulas around new gimmicks or vice versa in a desperate effort to keep ahead of the deadlines. This mechanical formation of the stories may eventually supplant my old method of writing by inspiration. I will always keep striving, though, to come up with bright new plots, even though the characters and props comprise the same old stable of professors, pot-bellied cannons, voracious crocodiles, ill-tempered birds, animals, and strong-jawed women. The recent story of Uncle Scrooge among the asteroids was one of my better flashes of inspiration. I feel kind of good about that one.


I hope the stories you have read in the duck and Scrooge books have helped to give you a broader understanding of life, as well as entertainment. But I've tried to keep off the shop-worn cops and robbers kick that depraves so much of TV and other mediums these days. If more of my readers grow up to sit in the Senate chamber than to sit in the gas chamber, I'll have been richly rewarded for trying to turn out a good product.


Best wishes to you, Sir Fan!

A few months after the Spicer visit, Barks was visited by Joseph Cowles. See "Memories of Meeting the Master". 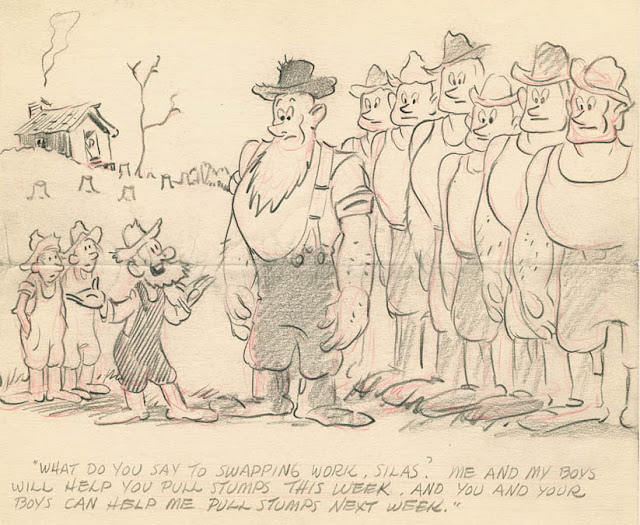 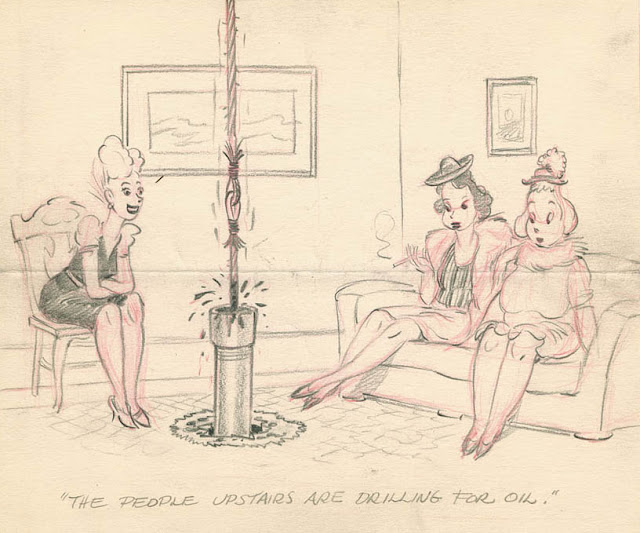 Comments:
Thanks for this. It's a pleasure to read both letters. It must have been a befuddling moment for Carl Barks to realize that someone out there got what he was doing.

This makes me wonder if John Stanley ever got similar fan mail for LITTLE LULU. Maybe his son, Jim, has some old fan letters among his father's effects. I shall soon see...

I enjoyed this entry very much! Thanks for posting it!

Have been posting some photos of Barks, rare artwork and letters sent to John Verpoorten and Bill Peckmann on my blog lately. (Thanks to Bill who shared them.)
Go to http://sekvenskonst.blogspot.com/ and search for "Barks" if you'd like to see them.

It's nice to see so much previously undocumented Barks stuff turning up these days. Like the two gag drawings in this post. If you got more, please don't hesitate posting them.:)