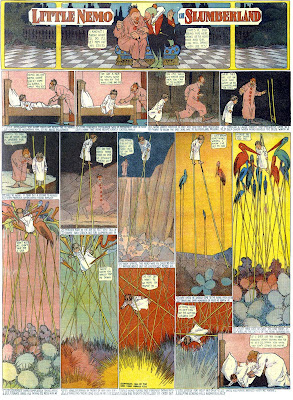 Winsor McCay sometimes drew Little Nemo in Slumberland at the Hotel St. George in Brooklyn Heights. At the St. George, I used to swim in their gilded Art Deco salt-water pool with its decaying mirrored ceiling, reflecting the glories of an earlier splendiferous era. After drying off, I would enter the St. George bar to get wet again.

McCay also lived and worked at 1811 Voorhies Avenue in Sheepshead Bay. Here it is in 1909, with unusual architectural features. Is that an upstairs porch? If so, McCay could have worked outside, drawing in the upper level shade amid Brooklyn breezes. 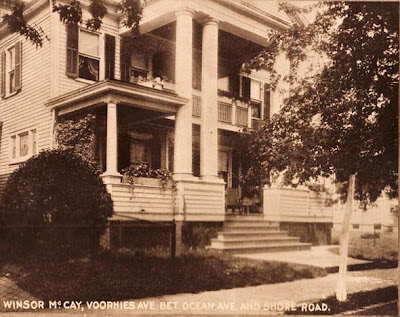 A century later, McCay has been forgotten, as his house has now become a demonic reminder of a Richard Matheson-styled nightmare. 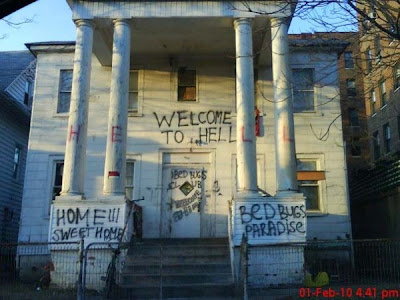 Here's the fire at the Winsor McCay House earlier this week. 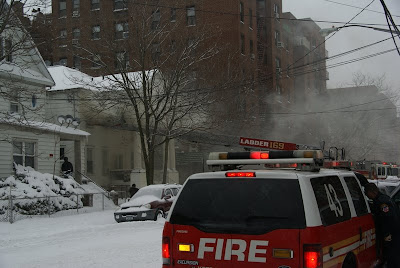 As seen below, it survived the fire. So much for the good news. The bad news is that, sadly, Winsor McCay's House isn't on the New York City Historic Houses list. Why not? It should be restored (with those marvelous side porches) and made into a museum to honor McCay, one of the most influential artists of the 20th Century. 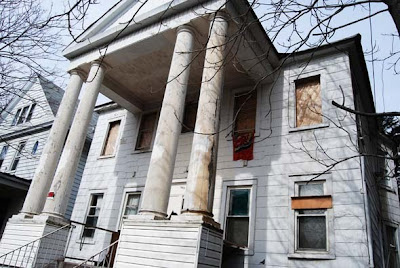 Thanks to Ned Berke and Sheepshead Bites.
Lisanne's slide show of the McCay House with one image of the (possibly original) stained glass windows. Designer Rick Spanier notes the following: 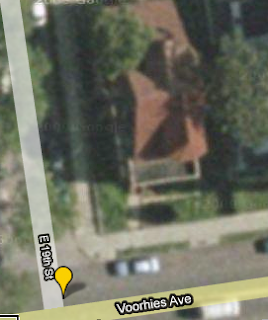 Perhaps even more sadly, McCay's (nicer) house at 1901 Voorhies was torn down and replaced recently with this apartment building. McCay's house was on the corner of Voorhies and East 19th Street; this view of the replacement is from the (longer) East 19th side. The roof of the original house is still visible in Google's satellite view. 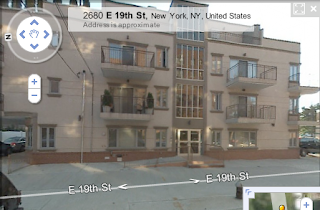 Comments:
The house should be on the registered historic list.