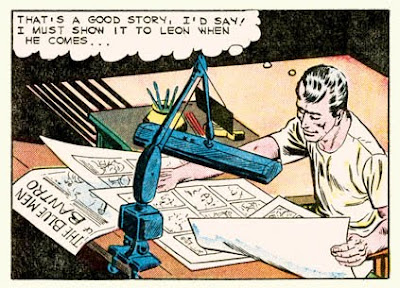 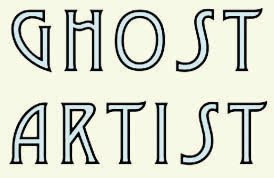 In 1972, after Russ Jones and I edited and designed several issues of Flashback magazine, we started doing a series of stories for Charlton's Ghostly Tales. In November 2008, I posted one of those, "Truck Stop", with the story-behind-the-story. Here's another, "Ghost Artist," which was just reprinted in Craig Yoe's The Art of Steve Ditko, published last month by IDW. Yoe positioned it as the concluding story in the book. 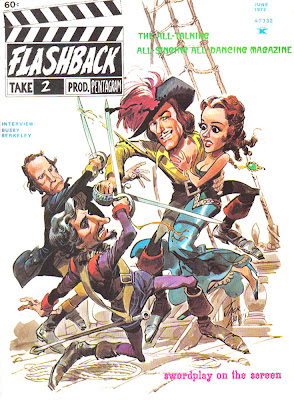 Russ had once worked as an assistant to Leonard Starr (Mary Perkins On Stage), and we would sometimes trade anecdotes about incidents at the Wally Wood studio and the Leonard Starr studio. These discussions eventually led us to script "Ghost Artist," a satire on the interactions of comic book and comic strip artists with their assistants.

You can spot first name references to Leonard Starr and Charlton editor Sal Gentile. I asked Charlton Spotlight editor-publisher Mike Ambrose about the transition at Charlton of editors Gentile and George Wildman, and he responded, "George's earliest editor credits appear in some of the late 1971 ghost books, and by January 1972 he was credited as editor across the line. Sal Gentile moved up into the magazine division, as had Pat Masulli before him. I don't know what happened to him after that, but he evidently died a few years ago, because I bought a group of his sketches and stuff from an estate sale in December 2002, from a Florida seller."

In the story, the name of comic strip artist Jimmy Elder is not a reference to Bill Elder. It's actually a combination of people Russ knew in the UK film industry--writer-director Jimmy Sangster and writer-producer Tony Hinds, who used the pseudonym John Elder. Sangster and Hinds scripted Dracula, Prince of Darkness (1966). The name of our character Tony Sansom also combines Hinds and Sangster, since John Sansom was a pseudonym used at least three times by Sangster. Further, Russ devised his own pseudonym, Jack Younger, as the flip side of John Elder. In 1976-79, Russ used Jack Younger as his byline on a half-dozen or so horror-fantasy novels, including Claw, Curse of the Pharaohs, Demon, Devlin, Maniac!, Rest in Agony and Satan Sublets. However, to make it even more confusing, there are some comic book stories credited to "Jack Younger" which were actually scripted by me.

The "personal habits" sequence of "Ghost Artist" has specific references to Starr's "French cigarettes" and to Wood's overheated studio and his psychoanalytical reflections. Once Wood went into a self-analysis monolog and later left for an appointment, leaving me and Dom Sileo both working at the studio drawing tables. After some ten minutes passed, Dom said in frustration, "Why does he have to tell us all that?"

The ending of "Ghost Artist" is probably inspired by my memory of "Portrait of the Artist," Harry Harrison's short story about a comic book artist who is replaced by a computer. It was published in the November 1964 issue of The Magazine of Fantasy & Science Fiction and reprinted the following year in New Dreams This Morning, James Blish's memorable anthology of science fiction stories about musicians and artists. (Harrison became familiar with computer theory and gunsight computers during WWII when he was trained to repair the secret Sperry Mark I.)

Since Russ and I had written and illustrated several stories for Charlton by this time, we anticipated doing the artwork for "Ghost Artist," but Wildman instead gave the script to Steve Ditko. I was disappointed we weren't going to illustrate the story, but as you can see, Ditko brought an intensity with a striking contrast between the two characters. He also added a nice touch by making Jimmy Elder a caricature of Russ!

For another Ditko story about a comic book artist, "The Blue Men of Bantro," go to Yoe's arflovers. 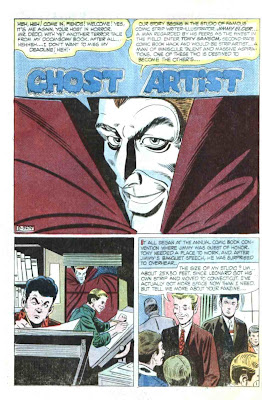 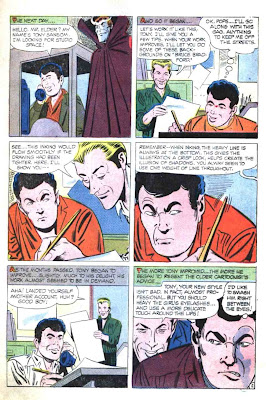 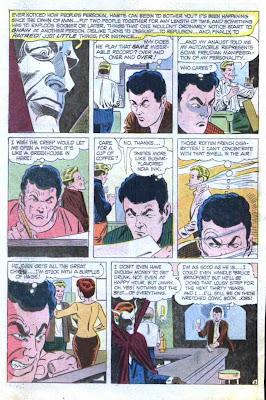 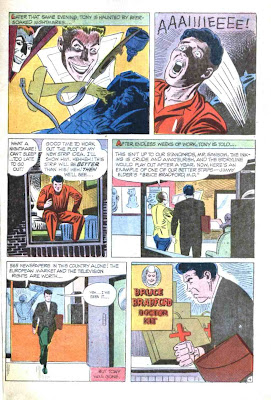 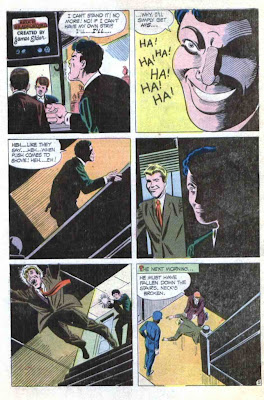 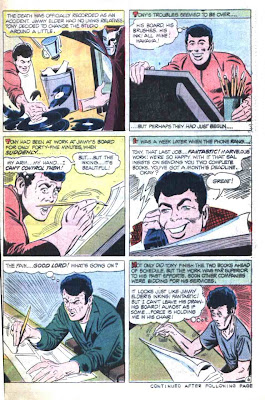 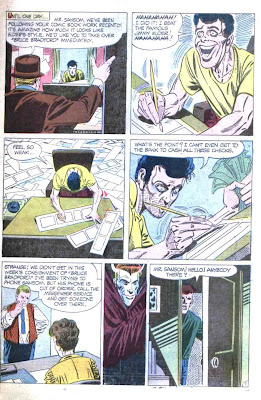 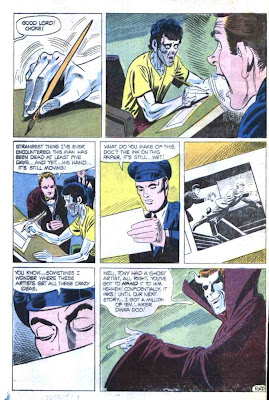 Comments:
Happy birthday, Bhob!
I just discovered your blog and I am really enjoying the posts.

Second only to Goodwin and Williamson's Blomo Smudge tale.

My favorite part: "My analyst told me..."

That had to be something Woody once said.

Probably, but I'm sure I must have been thinking of Annie Ross' "Twisted":

My analyst told me that I was right out of my head.
The way he described it, he said I'd be better dead than live.
I didn't listen to his jive.
I knew all along that he was all wrong,
And I knew that he thought I was crazy.
But I'm not, oh no...

...Oh, they used to laugh at me when I'd refuse to ride
On all those double-decker busses
All because there was no driver on the top.

Who inked this stroy? It sure doesn't look like Ditko to me....

Looks like Jim Aparo inked Tony's face in most panels, especially on the first 3 pages. Got his eyebrow curl and furrows.