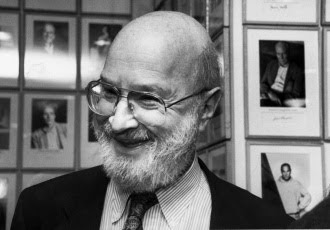 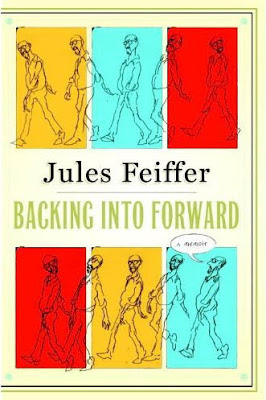 Reviewing this book for Publishers Weekly, I wrote:

As a kid (he was born in 1929), drawing comic strip characters on the sidewalk was a way to avoid Bronx bullies: “I was never not afraid.” Serving an apprenticeship with cartoonist Will Eisner, he felt he was a fraud (“My line was soft where it should be hard, my figures amoebic when they should be overpowering”), so he instead graduated to ghostwriting Eisner's The Spirit. His account of hitchhiking cross-country invades Kerouac territory, while his ink-stained memories of the comics industry rival Michael Chabon's Pulitzer Prize–winning fictional portrait. Two years in the military gave Feiffer fodder for the trenchant Munro (about a child who is drafted). Such satirical social and political commentary became the turning point in his lust for fame, which finally happened, after many rejections, when acclaim for his anxiety-ridden Village Voice strips served as a springboard into other projects. Writing with wit, angst, honesty, and self-insights, Feiffer shares a vast and complex interior emotional landscape. Intimate and entertaining, his autobiography is a revelatory evocation of fear, ambition, dread, failure, rage, and, eventually, success. 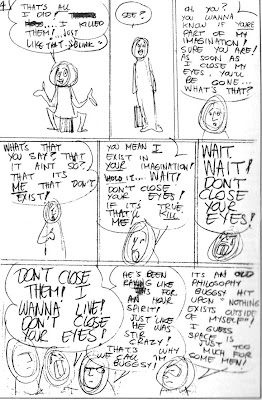 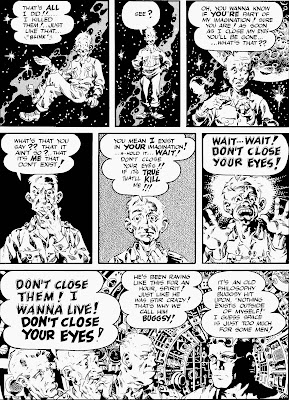 In Jules Feiffer's memoir, Backing into Forward (due in March from Doubleday), he describes the Wood studio of the early 1950s (located where Lincoln Center is today). Feiffer was 17 when he began at Will Eisner's studio. Working alongside letterer Abe Kanegson, he graduated from ruling lines and erasing to coloring, and he was 19 when he started scripting The Spirit for Eisner. After meeting Wood at Eisner's shop, he began visiting the Wood studio where he became friends with Ed McLean, as he recalled:
Excerpt ©2010 by Jules Feiffer
Wally Wood, maybe a year older than I, was brought back to our office by Will, who was impressed by his samples (no threat to me, he drew backgrounds). Woody was from the Midwest. Enviably handsome, he had a squinting, tousled, mischievous charm. His squint let you know that he knew a lot more than he was saying, which was good, because he was at a loss for conversation. He seemed to be wary of speech, his prolonged silences made him formidable. While Abe and I wisecracked like smart-ass New York Jews, Woody, in no way Jewish, made sly elliptical comments that were possibly profound had we only understood what he was saying.
He shared studio space in a rundown walk-up in a Puerto Rican neighborhood in the Sixties on the Upper West Side (now Lincoln Center) with two other cartoonists and a couple of writers for comic books, already in training, with the help of beer, Chianti, and cheap rye, to make it to the top as the next generation of comic strip roustabouts. In the mid- and late forties, the first step to success for ambitious young men in the low arts was to make a mark in comic books as illustrator or writer and break into syndication with your own daily strip before you were 30.
Cartoonists like Woody saw this as the end of the road, although some others who had the facility dreamed of moving further upscale to magazine illustration. That market was still flourishing, with the Saturday Evening Post, Collier’s, Esquire, Cosmopolitan, Liberty. A writer’s ambition, beyond comics, leaned toward breaking into the sci fi market… Woody introduced me to his studio mate, a lettering man named Ed McLean, who within minutes let me know that comics were not his end game, that his plan was to write the Great American Novel… Ed intended to impress me, and he did immediately. We met on my first visit to Woody’s studio, a long room that deepened and darkened as your eyes failed to get used to it. Artists and writers sat like galley slaves at desks and drawing tables jammed close enough together to constitute a single piece of furniture, an intimidating world of cluttered comic pages and pounding typewriters, dingy and roach-rich. The no-frills ferocity of the place was intoxicating.
Feiffer 's friend, Ed McLean, who became a legend in direct marketing copywriting, died August 13, 2005. In 1947, Feiffer asked for a raise, and Eisner instead gave him his own page in the Spirit section. Feiffer used it to create his first professional comic strip, Clifford. Feiffer probes his innermost thoughts, anxieties and memories in this compelling autobiography, and he devotes five pages to his struggle with Clifford, recalling, "It turned out to be more natural for me to write an episode of The Spirit than to write and draw my own comic strip... Now, even though I had preceded both Schulz and Watterson with my kids' strip, I was still too young and callow (and cautious) to make my point or make my mark... Without Eisner's guidelines, I was on my own, and not up to it."
©Jules Feiffer 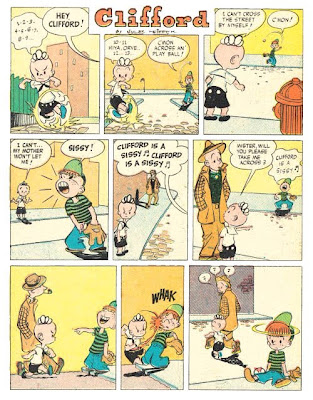 Below is a Wood story from the period Feiffer described. "Man from the Grave!" in The Haunt of Fear 4 (November-December 1950) was one of five horror tales Wood did for The Haunt of Fear. Wood did a total of nine horror stories and several horror covers for EC during 1950-51.
©WMG 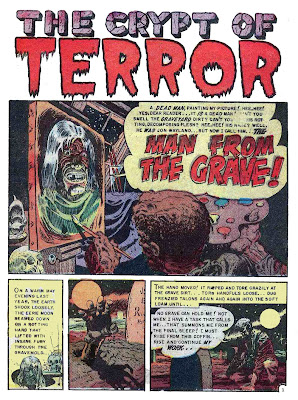 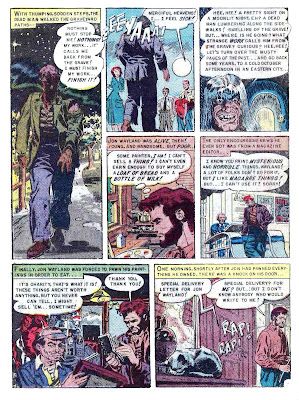 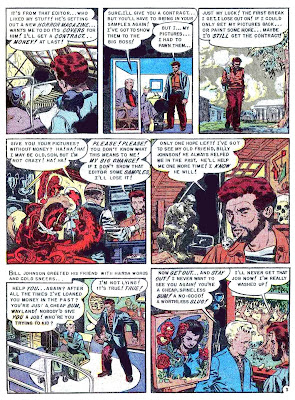 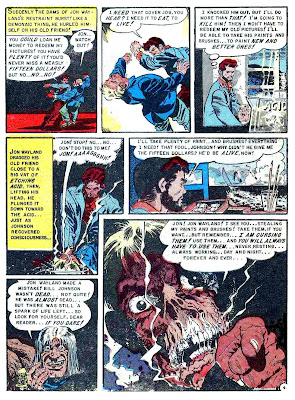 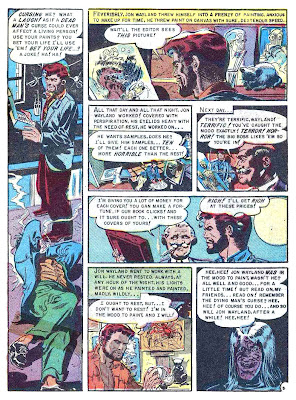 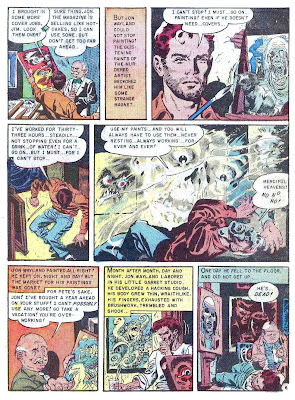 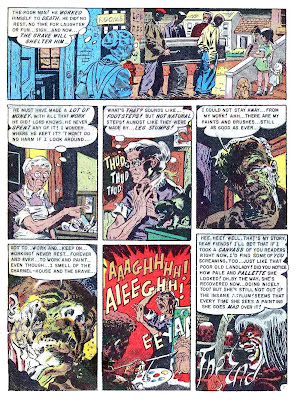 
In the early 1950s, after rejections of his books by numerous publishers (as he describes in Backing into Forward and the Strand Bookstore clip), Feiffer finally scored when his Sick, Sick, Sick comic strip began in the October 24, 1956 issue of the Village Voice. To launch his Voice strip, he wrote about his own stomach spasms and drew it with a UPA style, as he explained: "The drawing style, I decided, should be direct, cartoony, animated, akin to what I so admired coming out of the UPA studios, Gerald McBoing-Boing and The Nearsighted Mr. Magoo. The more painful the subject, the funnier it should look. So my chronic stomachaches took center stage for my first Village Voice cartoon in October 1956, turning a psychosomatic problem into a metaphor. For what? Who cared? It just seemed funny." 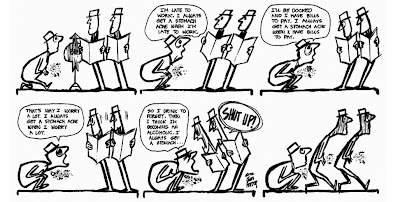 Comments:
I seem to remember from some Feiffer interview that Wood's art left him entirely cold.

These are great Bhob. It's so cool to see the rough layout right through to finish.

Were it not for Feiffer's signature and the article, I'd think I was looking at Kurtzman's Hey Look.