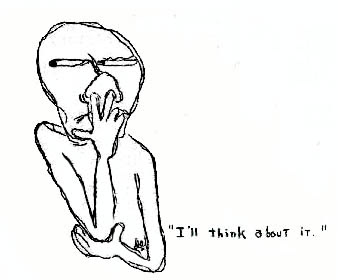 Among the fanzines I saw during the early 1950s, the drawings of Dave English always amused and impressed. Somewhere miles beyond the Saul Steinberg horizon, the lower-case signature "de" heralded fluid free associations and twisting, overlapping lines etched into ink-splattered mimeograph stencils spilling from cosmic trash barrels in the back alleys of the brain. Today, on the Internet, one can see a few, very few, of his drawings. Dig deeper, and you can find fiction written in English by English, a story titled "the little boy who bit people" (originally published in Charles Wells' Fiendetta).

Decades danced by before I finally met Dave English, and when I did, it was in the middle of a blinding snowstorm. A week later, they were selling T-shirts around Boston that read, "I survived the Blizzard of '78."

I had moved from Cambridge and was living in Somerville then. Someone at the Somerville public access television station pushed a camera to their studio window, better to capture snow flurries in the street below. To do a film review for Cambridge's alternative weekly, The Real Paper, I had to get through the snowfall to a screening of animated films scheduled for a showing at Harvard's Carpenter Center auditorium. The screening, however, was not at the Carpenter Center. 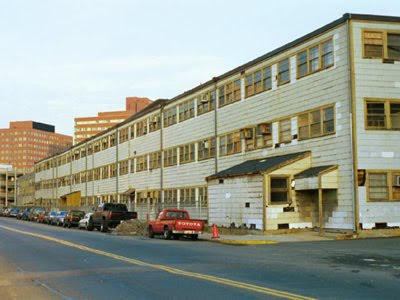 Instead, I traveled from Somerville's Lechmere station to the University Film Studies Center at MIT. Located at 18 Vassar Street, the Film Studies office was in MIT's historic, cavernous Building 20, a three-story, shingle-clad wooden barracks built in 1943 as a major site for radar research. It was a temporary structure, intended to be torn down after World War II, but for 55 years it housed a variety of labs, student clubs and academic departments until it finally was demolished in 1998.

Also in Building 20 was the Tech Model Railroad Club where members in 1959 wrote the early computer programs that set in motion the hacker dream and the personal computer revolution. See the opening chapters of Steven Levy's Hackers: Heroes of the Computer Revolution (Doubleday, 1984). Only two other journalists made it to the Film Studies screening. While the animated shorts unspooled, the wind began rattling a window. Someone entered the darkened room, and over the whir of the 16mm projector, I heard his odd, muttered warning as he left, "It's really coming down out there." 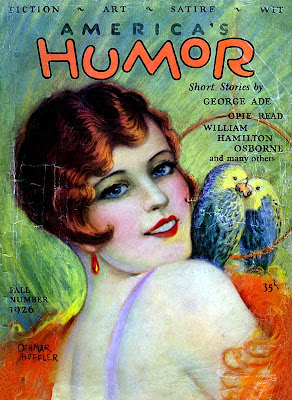 When I walked outside, I was stunned by the amount of snow piling up in white dunes. Trekking back to a snowbound Somerville wasn't a pleasant prospect. Better to simply go one subway stop into Boston, since I had a key to a friend's Beacon Hill apartment. Entering the Kendall station, I rode to Charles Street, where the streetlamps illuminated swirling clouds, sparkling like diamond dust in the twilight.

I walked two blocks on Charles through the gathering snowstorm, decided to get something to eat and went into a salad bar. Inside was a single customer. From plays I had seen, I recognized him as the Boston actor-mime Bill Barnum, who had given a memorable performance as Renfield in a local production of Dracula. ("Flies? Flies? Poor puny things! Who wants to eat flies? Not when I can get nice fat spiders.") Outside, snowdrifts began to bank against the front window. I said, "Bill, this is beginning to look like a genuine blizzard, so why are you hanging out here in a salad bar?"

His answer: "Oh, I was supposed to get together with Dave English. He should be here soon." When he gave this startling response, I decided I was in no hurry to leave. Some years earlier, the theater critic Larry Stark had told me that English lived in Boston and worked as a dishwasher in restaurants around the city, so I knew this was certain to be not just any Dave English but the Dave English. (Larry published A David English Sketchbook in 1958.)

"I'd like to meet him, Bill. Could you introduce me?"

Ten minutes later, the door opened, gusts blew in, and so did Dave English, frost flying from his cap. He took a seat between Barnum and myself, settling in with an eager smile as I began sounding off, praising his fanzine drawings of the 1950s. When I was in high school in the early 1950s, I had assumed from the sophistication of his sketches that he was older, so I was surprised to learn that we were about the same age. As we discussed various fanzines, artists and writers, Barnum eventually fell silent, gave us a curious stare and asked, "Do you two know each other?"
Harry Stephen Keeler 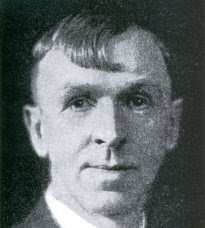 I remember English talking enthusiastically about his favorite novelist, the pulp writer Harry Stephen Keeler (1890-1967), who had edited America's Humor during the 1920s and also edited 10 Story Book from 1919 to 1940. Keeler was ranked by William Poundstone as "one of the strangest writers who ever lived." An apt description, perhaps, when one encounters a pre-Dickian detour by Keeler in a passage such as this from his X. Jones -- of Scotland Yard (1936):

So, Jones says, for all practical purposes, in a world of space and "time," the "wrinkles" resulting from the "crime-stress" appear, in reality, as "deviations." Deviations in human conduct: deviations from normal habit, custom, and be likened to an explosion, or concussion, the force of which radiates out in all directions--not just into the future, he cautions--but also into the past!--definitely deviating the paths and conduct not only of the chief actors--but of all those who have intimate contact with them--and who, by that very relationship, are thus displaced in 4 dimensions from the chief actors. The maximum possible "deviation" in a murder is, Jones points out, that of the murdered man--whose course is deviated, for the first time, from living to being dead! 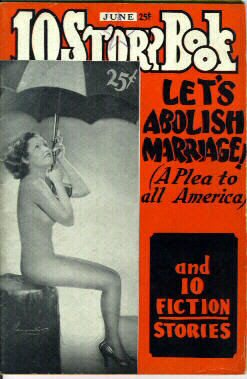 Keeler outlined his working methods for that kind of convoluted writing in his article "The Mechanics and Kinematics of Web Work Plot Construction" for The Author & Journalist. According to Larry Stark, Dave English also enjoyed reading Lovecraft, Samuel Delaney and Henry James. But I only recall him urging me to read Keeler, whom I had never heard of back in 1978. Today, the "Keeler Renaissance" gathers steam with websites and occasional mentions of Keeler's influence on Futurama and Neil Gaiman. Back issues of Richard Polt's Keeler News can be read online here.

Keeler's novels have been brought back into print by Fender Tucker's Ramble House (which has also published Dick Lupoff's Marblehead: A Novel of H.P. Lovecraft). Keeler's reputation continues to escalate. At this rate, he may some day fill the gap left when Richard Yates became too famous to still be called the best-known "least-known" writer. Larry Stark, however, finds the notion of a "Keeler Renaissance" so preposterous that he laughed uproariously for a full minute when I mentioned it to him. 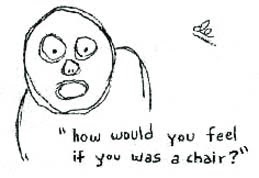 At some point, I asked English where he was living. He answered, "I live beneath a North End theater in an upholstered chair accessible only by using wooden planks to avoid stepping in the water surrounding the chair." I may not have the quote exactly right, but it was a vivid image that has stayed with me for years, reminiscent of playwright Alfred Jarry's bizarre living situation, a claustrophobic crib where visitors could not stand because his apartment was only half the height of a floor in the building.

Through the window I could see nothing but pure ivory whiteness as the clock edged toward 9pm. By that time, only two women were still working, cleaning up, and one of them called out, "Okay, fellows, we're closing up now."

When we stood up and stepped outside, ready to face the challenge, I was blasted in the face by a spray of frigid flakes. I expected Barnum and English to turn right and head for the Charles St. subway station. Instead, to my amazement, they turned left, which meant that they intended to slog across the Boston Common and then on to the North End, a staggering journey not unlike the perils faced by Scott of the Antarctic. I watched them walk away -- spectral ghosty men vanishing as they faded to white. Then, following the route of the ducklings in Make Way for Ducklings, I headed up the hill, a mini-Everest that would have left Robert McCloskey's ducklings sprawled on the sidewalk with ice-covered beaks.

A silent snow, secret snow fell while I dreamed in the darkness, and when I woke, the world had changed. I set out to meet some friends at the Hampshire House restaurant above the Bull & Finch Pub (the real-life Cheers bar) but had to circumnavigate a corner where the snow had drifted to a second-story height. With all vehicular traffic banned for a week, cross-country skiers left tracks on abandoned highways. Crowds of college students walked in groups through the middle of surreal Siberian streets.

I wrote the film review and somehow managed to get it to The Real Paper office in Cambridge. In Harvard Square so much snow was impacted over a narrow path between two buildings that walking the path actually brought one to a rooftop level. Some days later, a filmmaker phoned to congratulate me, pointing out that I was the only Boston film critic to get a review into print that week.

Dave English and I had exchanged mailing addresses, but I never saw him again. Where is he now? I don't know. Almost 40 years ago, English wrote chapters of his novel, The World Does Not Change (1970), which may or may not be influenced by Keeler. Sounds just like the kind of thing Fender Tucker might want to publish. So if Tucker can locate English and English completed The World Does Not Change, there's our happy ending. Meanwhile, I prefer to remember the Dave English who created mimeo magic with those dancing drawings of long ago. They drift softly through my memories. Where are the twilltone snows of yesteryear?

Comments:
A very nice piece of writing, Bhob. Made me feel like I was there where I never was.

One of my earliest fandom memories is of seeing a Dave English cartoon. He, Bill Rotsler, Dave Nelson, and Art Castillo were the best fan artists putting stylus to stencil -- economical lines, oblique humor, and a cosmic knowingness. I had heard (maybe from you) that de was in the Boston area, but that was a while back.

You made me interested in the playwright Alfred Jarry. From his Wikipedia entry: "Jarry moved into a flat which the landlord had created through the unusual expedient of subdividing a larger flat by means of a horizontal rather than a vertical partition. The diminutive Jarry could just manage to stand up in the place, but guests had to bend or crouch."

I wonder if this is where the idea came from that was used in "Being John Malkovich"?

I forget. What is similar in "Being John Malkovich"?