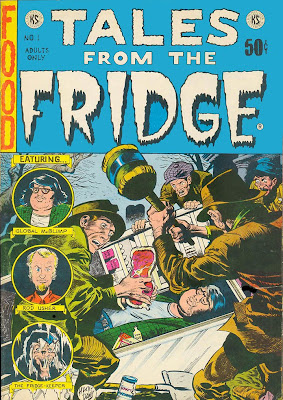 This is the cover and one page from the comic book Russ Jones and I did in 1973. When I devised that title in 1973, I had never heard the phrase "tales from the fridge," but I just now typed it into Google and got more than 13,000 results, including even a blog with that name.

During the late 1960s, Russ lived at 127 West 79th Street, a huge apartment building called the Clifton House, and I would go over there to join him in inking pages for DC Comics. A few years later, Russ and I collaborated on a series of stories for Charlton Comics. I previously posted "Truck Stop", published in Ghostly Tales #108 (November 1973). After "Truck Stop"was finished, Denis Kitchen took an interest in publishing Tales from the Fridge, and we began work.

The premise derived from a short Time magazine article I had once read about a promoter responsible for finding Colonel Sanders. According to that article, the promoter intended to generate a burger chain around a guy from Brooklyn who supposedly made the world's best hamburgers. The character Global McBlimp was based on a Boston University student Russ knew, and Global's name was a homage to a Li'l Abner character. Scripting and art were done simultaneously. In other words, we were doing inked pages with no set plan of how the story developed and what the ending would be. This was somewhat risky and might explain why the book ends with several one-page fillers.
Some people have asked me how the front cover was created. One art director even asked me if we pasted up photostats! No, here's how it was done: I put a copy of Tales from the Crypt #42 (see below) on an opaque projector, traced it off and made alterations. Russ then said to me, "Don't let me see that cover!" Russ, who had watched Jack Davis at work in New Rochelle, knew that Davis worked very fast, so he then began brush inking at a very fast pace, doing it like Davis but without any attempt to duplicate individual brush strokes. Thus, it really does look like Jack Davis art if you don't make a line-by-line comparison.

The Vault-Keeper became the Fridge-Keeper. Replacing one of the EC GhouLunatics, Russ drew in his own self-portrait as Rod Usher on the front cover. In the story, Russ embellished the character of Usher with occasional injections of self-satire. 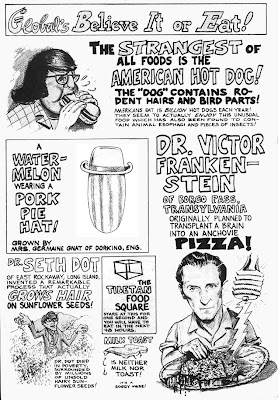 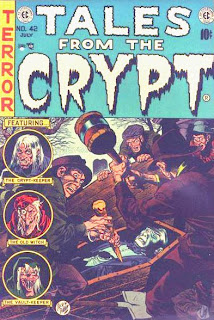