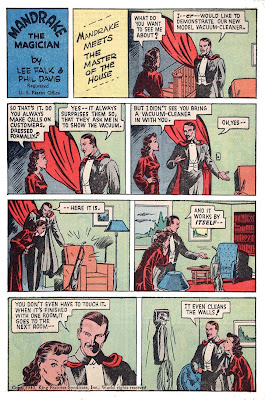 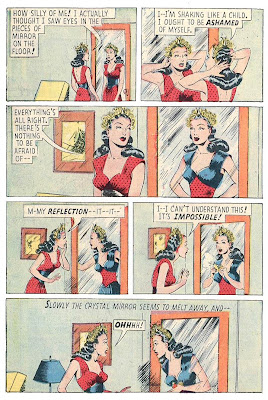 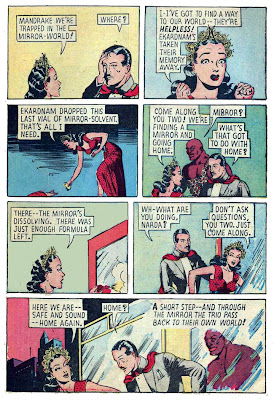 "The Mirror World" story from 1944.
The origin of Mandrake the Magician seems blurred. Perhaps we can make a stab at clearing up the confusion. The St. Louis illustrator Phil Davis met Lee Falk in 1933, and their King Features strip began June 11, 1934, initially drawn by the 23-year-old Falk. Coulton Waugh, in The Comics, found the early art and continuity of the strip "very shaky and insecure."

Davis soon developed a crisp and clean approach to illustrating the strip, and the Sunday page was added in February 1935. According to Ron Goulart (in The Encyclopedia of American Comics from 1897 to the Present), since Falk and Davis "were dark-haired gentlemen with moustaches, King Features publicity suggested, at various times, that each was the model for the dapper wizard."

Falk said he got the name for his character from John Donne: "Goe, and catche a falling starre... Get with child a mandrake root." But what about the magician Leon Mandrake? While he was touring with his stage act, he met Phil Davis in St. Louis, and they became friends and corresponded for years. Leon Mandrake was married to his first wife, Narda Mandrake, from 1939 to 1946, and Narda was a character in the comic strip. His second wife, Velvet Mandrake, was also featured in the comic strip. Falk claimed that he invented the name Narda by adding the letter "a" to the acronym for the National Association of Retail Druggists, but note that the letters in Mandrake contain an anagram of Narda. (Another character with an anagramatic name is Nardraka.)

After Mandrake met Davis, a huge promotional opportunity loomed, and a handshake sealed the deal. Or perhaps they just gestured hypnotically at each other. Lon Mandrake, the son of Leon Mandrake, recalled, "Phil Davis, well, he had eventually seen my father and drew the cartoon to look just like him. They ended up with a kind of verbal agreement at that point, and together they participated in a cross-promotion. Falk and Davis had said that my father was the best promotion they could have."

For more on Leon Mandrake's family, go to Leon's Family. For dozens of Mandrake strips, gesture hypnotically. For the entire "Manduck the Magician" story from Mad #14, go here. 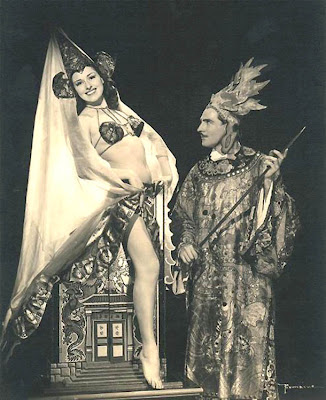 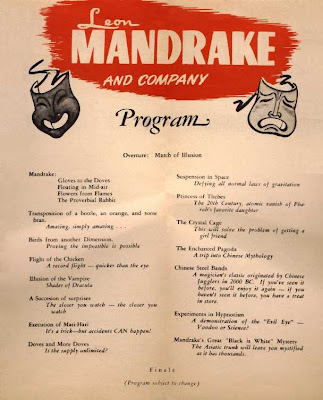 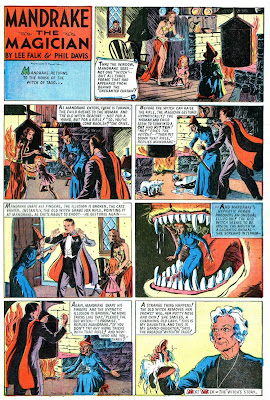 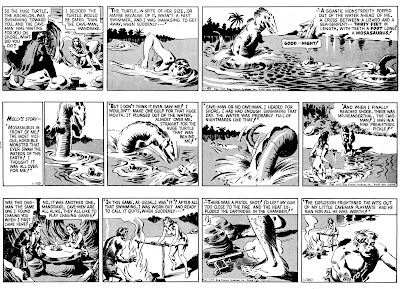 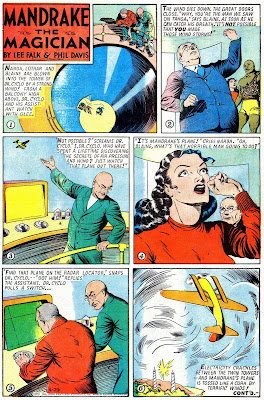 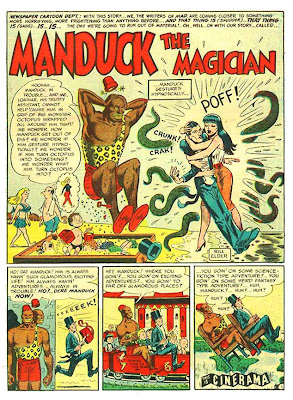 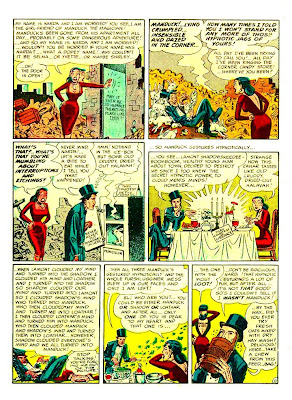 Excellent information, and incredible scans. Now I'm fascinated by the mystery of Mandrake's origin. The picture of Mandrake and is wonderful! I'm reminded of an EC horror comic by Wood (with Harry Harrison); the title escapes me.

"The Mad Magician" in the first issue of The Haunt of Fear.

What a great article. I am impressed... and so happy that you interested in this mystery. I am the granddaughter of the real-life Mandrake the Magician (and Velvet Mandrake) and am working on a documentary about him right now. Can I interview you on your knowledge and appreciation of Mandrake the Magician? Thanks! Kala Mandrake