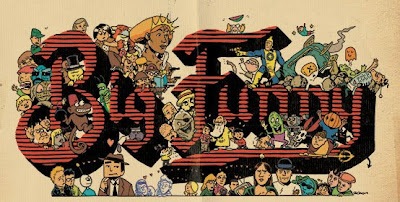 In the previous installment, "Death of Newspapers #5: Barney Google" (7/26), I wrote:
Maybe years after all the newspapers are gone, someone will say, "Hey! Why don't we print a giant-size comics section and distribute it every Sunday? We could even put some news items on the last page."
Two weeks later, someone did. It's an oversized, 48-page paper called Big Funny featuring 45 artists. Go here for the inside scoop from Big Funny co-editor Steven Stwalley, who, I gather, wrote the front page copy seen below. 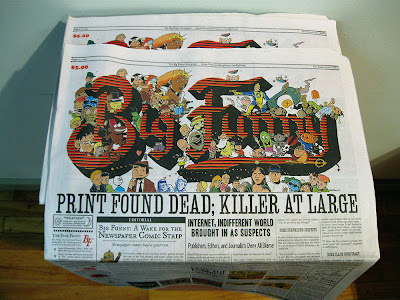 Big Funny sells for $10.95, available here. Here's a list of the artists and their websites. Here's how the International Cartoonist Conspiracy heralded Big Funny:
PRINT FOUND DEAD; KILLER AT LARGE

THE NEWSPAPER INDUSTRY IS COUGHING blood and gasping on its deathbed. Newspapers lost their relevance a long time ago, and with Internet media blossoming they can no longer compete. Readers and advertisers have moved on. Unfortunately, newspapers are taking their beautiful bastard child, the newspaper comic strip, with them. Today’s newspaper comics are much-maligned… and deservedly so. Today’s small strips, with mostly predictable, safe themes and bland characters are a pale shadow of what newspaper comics were in their wild and colorful youth. 110-or-so years from their birth, it’s been a good run. Let us not mourn the death of the newspaper comics… rather, let us have a wake to celebrate what they once were, and to build something new.
Before movies caught on, newspaper comics were the world’s first pop culture phenomenon. Happy Hooligan was a household name many years before anyone had heard of Charlie Chaplin. How many people have heard of Happy Hooligan today?
Now, as newspapers are going bankrupt on an almost daily basis, few readers are left who would buy a newspaper primarily for the funnies… this was not always the case. If the funnies had remained the vital cultural force they once were, would people today be so willing to give up their newspapers? The International Cartoonist Conspiracy, and Altered Esthetics gallery are collaborating to produce an oversized newspaper comics section like they would do it today if they still did it like they did it in the old days.
Here's just one sample, Jesse Gillespie's clever McCay modernization, Little Emo in Slumbaland. Go here to see Jesse's comments and photos re Big Funny and Little Emo, plus more of his artwork. 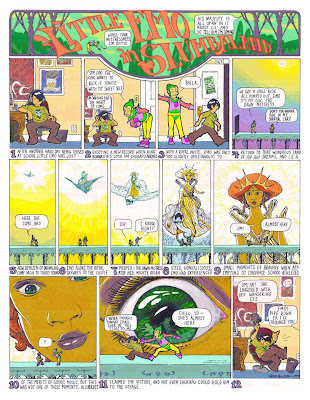 Comments:
Thanks a lot for the link, as well as the positive press on Big Funny in general. It was such a great project to be involved with; I hope the future sees more of the same. Have a great day!

Jesse: Great eyeball! Now I think I have to dig up some Happy Hooligan pages.