Nights in the Gardens of Brooklyn: Continuing with more memories of my days in the product development department of Topps Chewing Gum, another Topps humor product I envisioned would have adapted Al Jaffee into a trading card series.

I constructed a full-color, workable mock-up to show how Jaffee's popular Snappy Answers to Stupid Questions series for Mad could be revamped into Topps cards. The exterior of my dummy device showed a cartoon with the answer balloon as a die-cut hole instead of three visible answers (as above).

The answers would remain hidden until accessed. A brad or grommet held a circular thumb wheel inside the card. One could turn the thumb wheel so the three hidden answers would display one by one in the die-cut area. The dummy also showed how the card could be made interactive with a white area where the user could scribble in his/her own gagline.

The mock-up worked perfectly, yet it was defeated by the technical aspect which made it costly by Topps standards. They hated to do any product that involved something more than newsprint paper or cheap cardboard. Not to mention licensing fees and rights for Jaffee and Mad. So naturally, it was rejected.

Jaffee's Tall Tales comic strip and panel, drawn for the New York Herald Tribune from 1958 to 1965, was syndicated to over 100 newspapers. The panels were recently collected in a book, Tall Tales (Abrams, 2008), with an introduction by Stephen Colbert. 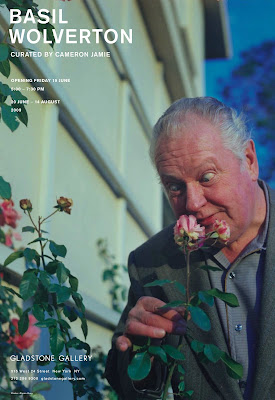 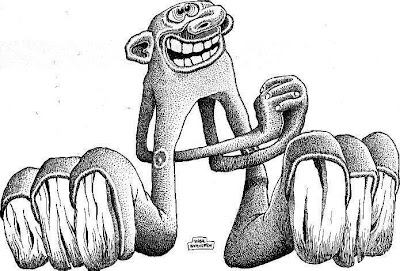 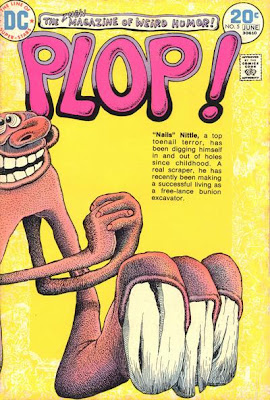 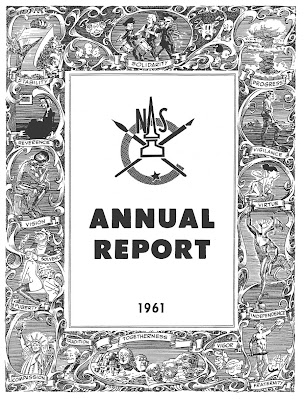 Below is Wood's capsule autobiography for the National Cartoonists Society. He grouped goopy characters together for goofiness galore and then combined them with one of his pages from Mad. Notice that he lettered his  name as "Wallace Wood,'' not "Wally Wood". As he stated on several occasions, he did not like the name "Wally". 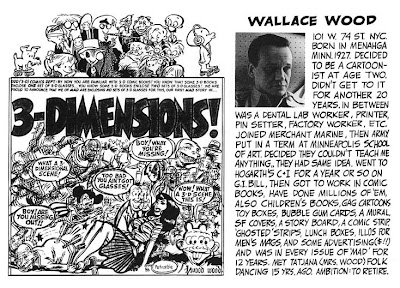 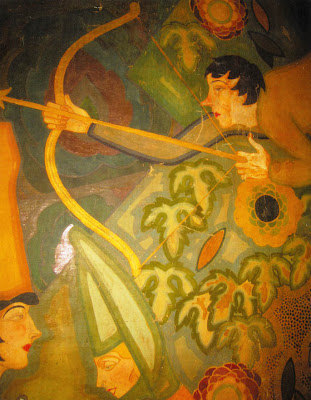 Lillian Gaertner Palmedo was a muralist, set designer and costume designer who worked in New York City during the 1920s and 1930s. When she was 14 years old, her skill as an artist was recognized by architect and theatrical designer Joseph Urban, who made her his protégé. He packed her off to art school in Vienna where she studied under the architect and designer Josef Hoffmann. Back in Manhattan, Palmedo was commissioned to paint murals at various hotels, theaters, restaurants, clubs and office buildings throughout the city, including the original Ziegfeld Theater (1927), the Persian Room at the Plaza Hotel (1934), the Hotel Pennsylvania, and the Essex House. As a costume and set designer she contributed to productions at Carnegie Hall and the Metropolitan Opera.

Here we see two details from her mural "The Joy of Life", rescued from the Ziegfeld when the theater was destroyed (despite public protests) in 1966. Click to enlarge image at top. Control-click "Urban planning" heading to hear Paul Whiteman playing a medley of the song hits of 1933 on NBC's Kraft Music Hall (January 4, 1934), including "The Last Round-up" from the Ziegfeld Follies of 1934 (which opened that same day). 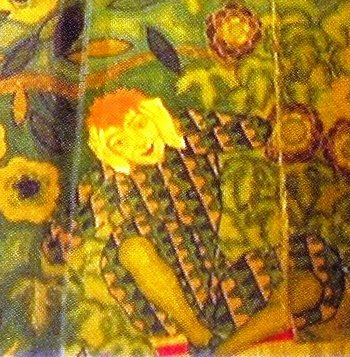 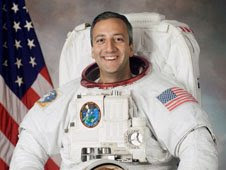 [Seth Myers' SNL "Weekend Update" gag: "So in 50 years, we have gone from "one giant leap for mankind" to "launch was awesome."] 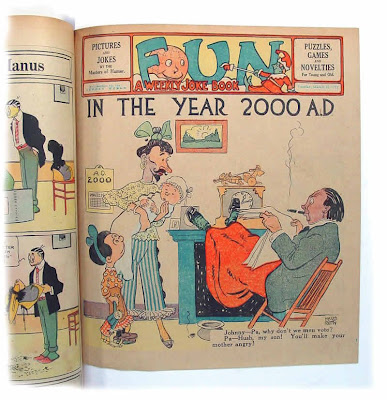 .
To see RealPlayer video on the American Newspaper Repository at Duke University, use control-click on the heading above and then go to full screen. 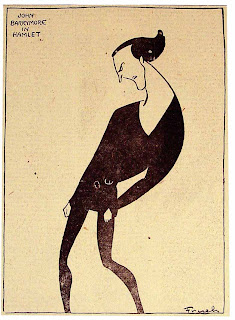 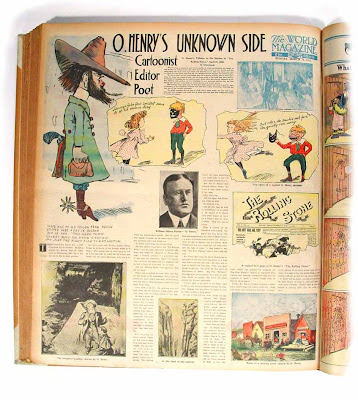 This page on O. Henry as an illustrator and cartoonist ran in the New York World on May 24, 1912. Al Frueh's Barrymore caricature appeared in the World on December 9, 1923.

In 1999, author Nicholson Baker founded the American Newspaper Repository. The collection contains the only surviving long runs of the New York World, the Chicago Tribune and other newspapers. When Duke acquired this collection from author Baker a few years ago, Baker continued to maintain a website with full-color images from newspapers in the collection. I suddenly found a dead link to that site. Hence, this post. Link restored; see at top. The video above tours the huge facility needed to store the collection and also shows bound volumes opened on pages of illustrations and comics (Mutt and Jeff). Since neither site had the images Baker originally displayed, I made some of them available here. But now the link is restored; see at top.

Nicholson Baker wrote Double Fold: Libraries and the Assault on Paper to explain how the use of microfilm by libraries resulted in the trashing of books and newspapers, as outlined on the book's back cover blurb:
Since the 1950s, our country’s libraries have followed a policy of “destroying to preserve”: They have methodically dismantled their collections of original bound newspapers, cut up hundreds of thousands of so-called brittle books, and replaced them with microfilmed copies — copies that are difficult to read, lack all the color and quality of the original paper and illustrations, and deteriorate with age. Half a century on, the results of this policy are jarringly apparent: There are no longer any complete editions remaining of most of America’s great newspapers. The loss to historians and future generations is inestimable.
To read the beginning of Double Fold, go here.
Double Fold came about after Baker was contacted by comics historian Bill Blackbeard. In the introduction to Double Fold, he explains how Blackbeard tipped him off to how libraries began to destroy books and newspapers after they were microfilmed:

A man named Blackbeard told a reporter that he had a story for me... Blackbeard had a formal, slightly breathless way of talking; he was obviously intelligent, perhaps a little Ancient Marinerian in the way that lifelong collectors can be... Some of what Blackbeard told me I couldn't quite comprehend: that the Library of Congress, the purported library of last resort, had replaced most of its enormous collection of late-nineteenth and twentieth-century newspapers with microfilm, and that research libraries were relying on what he called "fraudulent" scientific studies when they justified the discarding of books and newspapers on the basis of diagnosed states of acidity and embrittlement... In 1967, filled with an ambition to write a history of the American comic strip, he'd discovered that libraries were getting rid of their newspaper collections... Unfortunately he was a private citizen--the library's charter permitted the transfer of material only to a non-profit organization. "I became a non-profit organization so fast you couldn't believe it," Blackbeard told me... He went around the country picking up newspaper volumes.
Blackbeard's collection of newspaper comic strips went to the Cartoon Library & Museum at Ohio State, while Baker's collection went to Duke. The following is excerpted from Duke's "descriptive summary" of that collection:

The American Newspaper Repository was founded in 1999 as a non-profit corporation in order to save a unique collection of original newspapers that would otherwise have been destroyed or dispersed, and to preserve and make available these landmarks of American publishing. Nicholson Baker, author of numerous fiction and nonfiction works, including writings on libraries, founded and served as director of the Repository in conjunction with research for his 2001 release, Double Fold: Libraries and the Assault on Paper.
The American Newspaper Repository Collection dates from 1852 through 2004 and consists of approximately six thousand bound newspaper volumes and more than 11,000 unbound newspaper items, most of which came, directly or indirectly, from the British Library. Notable long runs include the World, the New York Herald Tribune, The New York Times, and the Chicago Tribune. There are also runs of foreign language and immigrant papers, such as the Yiddish Forward, the Irish World, the Greek Atlantis, trade journals, Communist papers such as the Daily Worker, and other political papers. Many of these runs apparently exist nowhere else in the original format...
The Gumps, Chicago Tribune, September 30, 1923 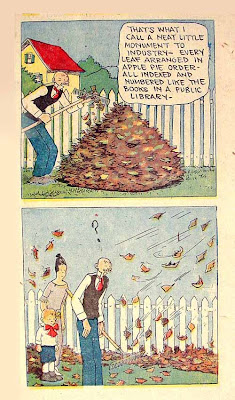 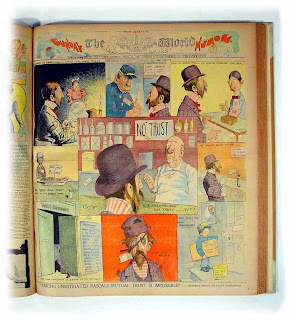 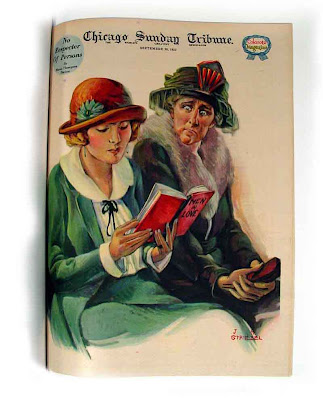 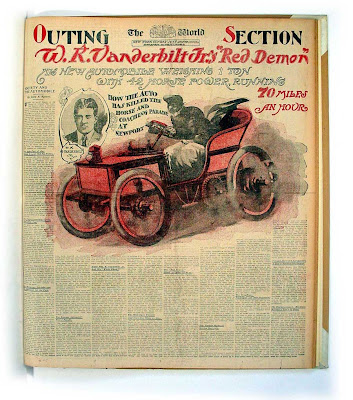 Thursday, May 07, 2009
Wood Chips10 .
Wood's cover and inside front cover for Avon's Strange Worlds #4 (September 1951). Bright Lights After Dark suggests that Wood was inspired by Anita Ekberg when he drew this outer space villainess. Check out their Ekberg photo and report back here with your opinion. Notice the chin on shoulder pose. 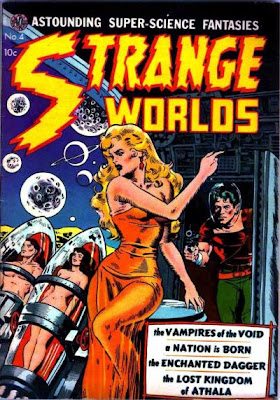 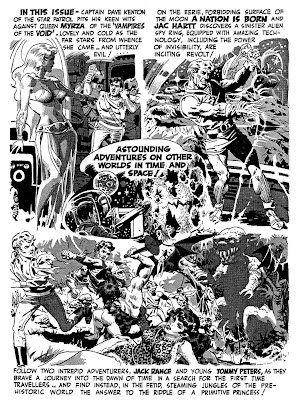