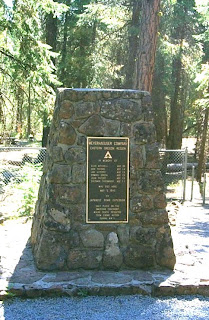 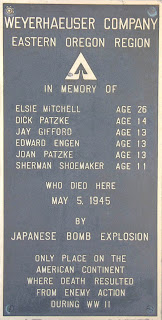 May 5 is the 64th anniversary of the only fatalities due to enemy action on the U.S. mainland during World War II. Oddly, it's not generally known that the Japanese succeeded in killing American civilians with WWII bomb attacks on the U.S. Certainly we were never told about this in classrooms during the 1940s and 1950s. If the 1945 event had been widely taught in schools, would there have been less complacency about such attacks during the 1990s?

In 1945, the press cooperated with the FBI to keep those bomb attacks secret -- with the result that the Japanese abandoned the campaign, believing it to be unsuccessful. Of 9000 unmanned Fu-Go balloon bombs launched from Japan, a confirmed 285 fell in an area between Alaska and Mexico with some found as far east as Iowa. It's possible that some bombs still exist in mountainous areas in the West. In July 1945, a Japanese military spokesman in Singapore spoke of a major assault in which soldiers would fly with the incendiary balloon bombs, directing them over West Coast cities. 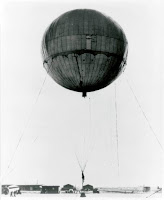 On March 10, 1945, one of the balloons came down near the Hanford, Washington plutonium facility, part of the Manhattan Project. It caused a short circuit in the electrical system used for the nuclear reactor cooling pumps. An emergency system, which had never been tested, prevented a meltdown. On May 5, 1945, Reverend Archie Mitchell led a Sunday School picnic into the forest near Bly, Oregon. When the group found a balloon caught in a tree and pulled on it, the bomb exploded, killing five children and Mitchell's pregnant wife, Elsie. Mitchell survived, but years later, as a missionary in Vietnam, he was captured by the Viet Cong and vanished.
Elsie and Archie MItchell 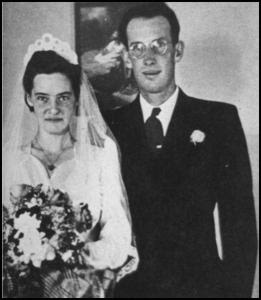 After the deaths, the government lifted the ban on press coverage on May 22, 1945 with a War and Navy departments joint statement that made no mention of the fatalities: "It is the view of the departments that the possible saving of even one American life through precautionary measures would more than offset any military gain accruing to the enemy from the mere knowledge that some of his balloons actually have arrived on this side of the Pacific."

Constructed in 1950, the Mitchell Monument is located on Gearhart mountain near Bly in the Fremont–Winema National Forests. In a strange synchronicity, Bly was the proposed site of a terrorist training camp, and the trial regarding that is taking place this week in New York.

With Google Advanced Image Search the phrase "world trade center" with "memorial" as a qualifier will bring 210,000 results, while "mitchell monument" will bring 161 results. The few photographs of the Mitchell Monument that surface almost all show it hidden in dark shadows. (I lightened the one above with Photoshop.) Photos that make the words on the Monument readable are almost non-existent on the Internet. After extensive searching, I was able to find only three. The event is also described on Elsie Mitchell's tombstone (below). 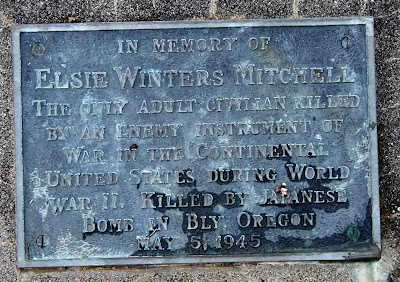 Comments:
Somewhere in storage I have a very small piece of one of those balloons, roughly 3 inches square, made of that odd, pulpy 'washi' paper.

It belonged to my father, who received it during WWII enclosed in a letter from his father.

I think my father received it in San Diego, where he was briefly stationed at the war's end, before his discharge from the Navy following his tour of duty in the South Pacific.

His family was back home in Oregon, where his father was a school teacher. I don't know how my grandfather came into possession of the balloon fragment, but I gather it was sort of 'hush-hush'.

My dad said that he remembers the news from home was that Oregonians were all aghast and shocked by not only the (word-of-mouth) news of the attack and deaths in Bly, but the lack of press coverage.

An explanation I heard via my Dad was that the Japanese had the notion that they could bring America to its knees with firebombs by setting forests ablaze, thus crippling the US timber industry.

Interesting to know about the "word-of-mouth" reaction, as this is something undocumented in the info I've looked over.

Also, "3 inches square" makes me wonder if someone cut apart a balloon and sold sections, much like shoulder patches and other WWII items were collected, sold and traded.

What the hell is your point? That we should shut the f up about 9/11 because you liberals are too busy apologizing to our enemies? Or what?

some of these were relatives that were killed. I believe there was someone at the Turner Memorial home that was connected to the Bly incident. A few years ago Japense students was taking pictures and writing of the incident.

Two of the children that were killed that day were my grandpa's cousins. As a child I was told about this story and when the internet came out I could never find anything about it. Our government said that they didnt want the Japenese government to know that their plan of ballon bombs actually worked.