Last year the term "fanboy" was added to the Merriam-Webster Dictionary with 1919 given as the year of origin. Back then, it meant: a boy employed to continually keep a potentate cool by constant fanning. (One has to wonder how long a modern-day fanboy would last at such a job.) However, both Merriam-Webster and Wikipedia (as of this writing) have created confusion by incorrectly juxtaposing the 1919 date with the modern meaning.

Also in 2008, it was announced that the long-awaited movie Fanboys is scheduled to open February 6, 2009. Kevin Spacey is one of the producers. The film's storyline, set in 1998, follows a group of friends who break into Skywalker Ranch to steal a print of Star Wars Episode I prior to the premiere. During their road trip, they meet Kevin Smith and William Shatner, plus various bikers and trekkies. 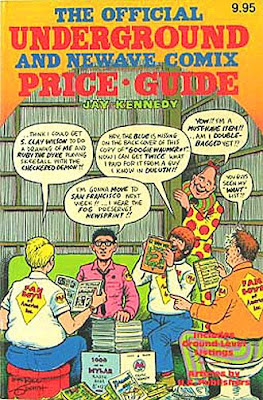 We know that the word "trekkie" was coined in 1967 by science fiction editor Art Saha at the 25th World Science Fiction Convention (Nycon 3) when he saw some fans wearing pointy ears and said, "Look at the trekkies." But what is the origin of the word "fanboy"? Matthew J. Pustz, author of the scholarly study, Comic Book Culture: Fanboys and True Believers (University of Mississippi Press, 2000) incorrectly believed the word might have been launched when Bill Griffith drew the cover for Jay Kennedy's The Official Underground and Newave Comix Price Guide (Boatner Norton Press, 1982) showing shirts with "Fanboys of America" emblems. In truth, the current usage got underway a decade earlier than Griffith when the word was introduced by the writer-artist Jay Lynch in 1972. Then Robert Crumb took Lynch's word and inserted it into a 1973 "Mr. Natural" strip for the Village Voice. It spread from there into various tributaries of the mainstream. 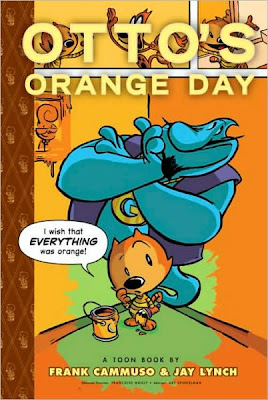 After writing for Mad, Cracked and Playboy, humorist Lynch recently moved into the children's book field with his book Otto's Orange Day (Toon Books, 2008), illustrated by Syracuse Post-Standard political cartoonist Frank Cammuso. Lynch followed with another 2008 Toon Book, Mo and Jo Fighting Together Forever, illustrated by Dean Haspiel, who recently did "Snow Dope" for The New York Times. For other Toon Books, go here.
Below is an email Lynch wrote ten years ago explaining how "funboy" became "fanboy". The text mentions someone named Killeen. This is a reference to Bill Killeen, who was editing Charlatan magazine in Tallahassee in the early 1960s. Prior to that, Killeen was the editor in Austin of The Texas Ranger humor magazine at the University of Texas, where he wrote the first Wonder Warthog strips for Gilbert Shelton. One appeared in Kurtzman's Help!, followed by others written and drawn by Shelton. Underground comics pioneers Lynch, Shelton, Art Spiegelman, Skip Williamson and Jack Jackson (1941-2006) appeared regularly in Charlatan from 1963 to 1966. Here's Jayzey: 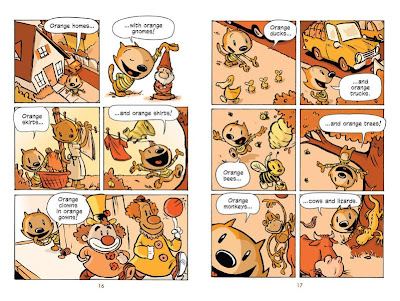 Back in Florida, when I was a youth—we used the disparaging term “funboy” to put down our more supercilious friends. In Charlatan mag, Killeen and I often used this term. In 1972, when Al Judson and Bill Beasley announced their plans for a new fanzine, I suggested the title Fanboy—as kind of a cross between fan and funboy.

Although I originally suggested it as a joke, Bill and Al either didn’t get the gag—or thought the title apt, as they used it as the title of their zine. Bill and Al published their fanzine on schedule—and put this new term into the lexicon.

Today I do a search for the word “fanboy” on the Internet—and get thousands of pages. Yet when I limit the search to include the names of Bill Beasley or Al Judson (plus fanboy), there are no results at all. I know all Al wanted out of life was a little piece of comix immortality. When he was lettering for Marvel (or was it Atlas at the time?), the letterer never received any credit. When Al passed on a few years ago, there was no mention of his death in The Buyer’s Guide or Comics Journal. Yet the word that he and Bill put into the lingo of comix is used daily by all comics fans. How sadly ironic and poignant. 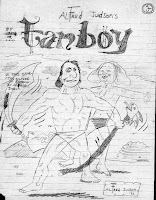 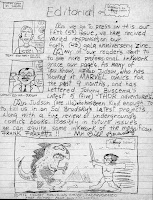 As the modern vultures descend upon Bill’s contribution to comix (inventing the term “fanboy”), by putting out dozens of books using Bill’s title as their own, and without a speck of recognition for Bill and Al, the injustice of the whole situation is a black eye on the countenance of the comic book industry. Since very few copies of the original Fanboy have survived, it well may be up to us (who have bagged these precious issues of the original Fanboy) to put things aright and see that Bill and Al get at least a “special category Harvey Award” for their contribution to this industry.
--Jay Lynch (January 7, 1999)

Comments:
The first time I heard the word "fanboy" was from Bill Mason in the seventies. It might have been at the comicon in Boston, where I first met him.

The first printing of the Beasley/Judson mag FANBOY was in '72.
Some of Crumb's pals were in the first ish of Fanboy. Glenn Bray printed it. Eventually, when Crumb was doing the Mr. Natural weekly strip for the Village Voice, he used the term there. From there it caught on and entered the lexicon.

Jay, okay, I fixed to give correct year.