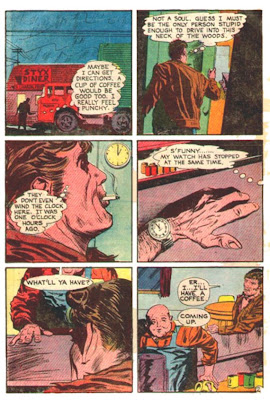 Control click above for Dave Dudley: "Six Days on the Road". 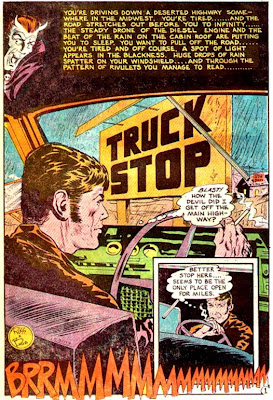 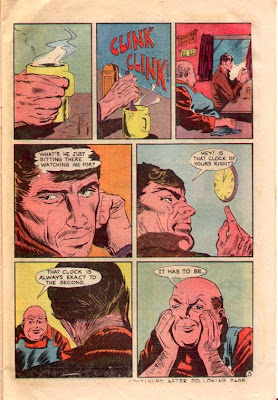 Russ Jones is the founding editor of Creepy and a pioneer in the publication of original graphic stories in mass market paperback books, such as Christopher Lee's Treasury of Terror (Pyramid, 1966).

During the late 1960s, Russ lived at 127 West 79th Street, a huge apartment building called the Clifton House, and I would go over there to join him in inking pages for DC Comics. A few years later, Russ and I collaborated on a series of stories for Charlton Comics. Here is "Truck Stop" which was published in Ghostly Tales #108 (November 1973).

A series of events led up this story. Russ had done some work for the Twilight Zone comic book. One day I ran across a copy and mentioned to Russ that the stories in that comic book were several steps removed from the style and approach of the Twilight Zone television series. Pondering this, I began to wonder what Rod Serling might have written if he had worked for comic books. I decided it might be fun to script a story that would attempt to duplicate the type of atmospherics, themes and settings that Serling put into the TV series. There were episodes that took place in small town soda fountains, in rural areas and roadside diners.

This led to the thought that I could base such a story on a real-life incident that happened when my brother Joe and I were driving cross-country in 1969. It was very late, around midnight, as we drove through pitch black darkness in Arkansas. Nothing was open anywhere, and many hours had passed without food. I suggested that we stop at the first place we spotted.

Suddenly, out of the blackness, loomed a sign that simply read, "EAT". We pulled up and went inside. It was totally deserted. No customers, no one behind the counter. In the middle of the room, floor to ceiling, was a huge hand-painted sign, illustrated with a cartoon chicken, that read, "Gitmo's! If you want mo' you can git mo'!" We stood there staring at this sign. Then a woman wearing a blue bathrobe appeared and said, "What kin I do for you boys?"

I said, "I'd like some of that fried chicken."

She said, "Well, I cain't git y'all enny fried chicken, but I can serve you up some Gitmo's."

"Okay, fine," I said. "We'll have some Gitmo's." We sat on stools at the counter and watched as she began frying chicken and heating vegetables.

I asked about the sign, and she explained, "Oh, yeah, he had big plans. He said he had the luck of the pluck. The idea came to him one day while he was in one of those Minnie Pearl Chicken places. Said he was gonna be franchisin' and fryin', fryin' and franchisin' 'til Gitmo's stretched from here to Atlanta. Yes sir, he was a schemer, all right, but there's a difference 'tween a planner and a doer. After all that talk, he jus' took off one day. It was all jus' a pipe dream. So y'all are sittin' in the one and only Gitmo's you'll evah find."

She set the two plates on the counter. As it turned out, Gitmo's and Coca-Cola made a terrific combination, and I was thinking how great it was that we had stumbled into this four-star eatery with superb Southern cuisine. Cleaning up behind the counter, she walked out into the center of the cafe and sat down at a table behind us.

As I ate, she struck a match to light a cigarette. She sat there smoking in silence. She was facing us, but we could not see her. It was an odd reversal of the usual spatial arrangement where a manager and employees are visible to customers seated at counter and tables. We continued to eat, but knowing she was sitting there in silence, staring at our backs, made me uneasy. Of course, there were no other customers, so there was no real reason for her to remain behind the counter. I heard her move the ashtray as she crushed out the cigarette. Silence.

I wanted to turn around, but I just kept eating. Eventually, she broke the silence. "If you boys are interested, I can show you something you've never seen before and will never seen again."

"I can take you boys across the road over there and show it to you." I looked out the door toward the highway. Across the road, nothing could be seen in the darkness. There were no lights visible anywhere. Only blackness. I thought, No matter what she says next, there is no way I am going across the highway with this woman.

"We can walk over there," she said, "And I can show you a mummy with a glass eye."

"Well, er, thanks, but we have to get going. The Gitmo was great!" I stood up, put some money on the counter, and we departed, driving away into the inky blackness.

Once the "Truck Stop" script was written, I did the penciling and lettering. Russ did the inking, while I inked the backgrounds. Note that several panels in "Truck Stop" parallel the real-life situation, such as entering the diner and finding it deserted, the top row of panels on page three and the nothingness as seen from the doorway. The signs and prices were based on fading memories of 1950s Texas cafes where one could get a bowl of chili for a few coins or spend a bit more to dine in style with a "Chicken Fried Steak". The coloring obscures the Chicken Fried Steak sign in the third panel of page three.

It seemed to me like a Serling touch to take Charon, the ferryman of Greek mythology, and put him in a modern setting. The real River Styx is 35 miles long, located at the Alabama-Florida border. Many years ago, traveling from Alabama to Florida, I went over a bridge on that river, and I have never forgotten the quick glimpse of the sign at the bridge entrance. It appeared to be an official state sign and read:
River Styx - Charon Crossing

Comments:
Isn't there a page 6 to this story? Or are we condemned to an eternity of wondering what he saw out the door...?

Actually, it's an eight-page story. However, I had a problem getting the uploaded pages to appear in the proper sequence, so my solution is to insert the art pages as I write the text (still in progress).

Wish I had a photo of that Styx River sign.