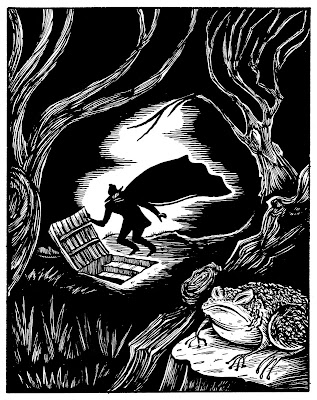 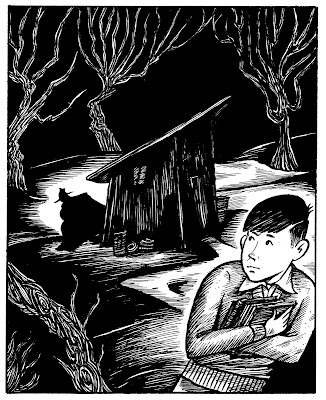 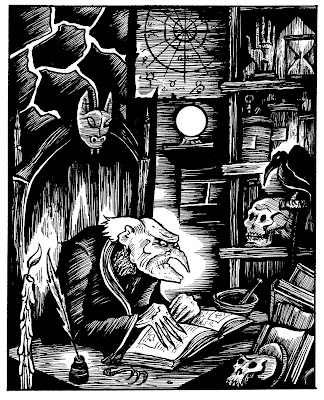 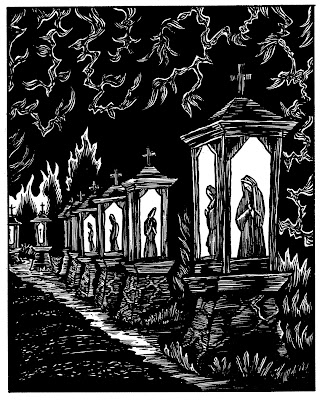 Control click heading above to hear "The Secret Universe" by Diatonis.

Sala was born in Oakland and grew up in Chicago where his father was an antiques dealer. Charles Addams, Lee Brown Coye and Chester Gould were all influences on Sala. In a 2006 interview with Logan Kaufman, one reads between the lines to find that twisted aspects of Sala's art can be traced back to his childhood with an abusive father:

My father was not a happy man. He was angry and irrational and would often terrorize me and my brother and sister with violence or threats of violence. This was the mid-1960s, and he was an "old school" first generation Sicilian with what they used to call "a temper," so disciplining kids by hitting them was not as foreign a concept as it is now, perhaps. I got hit with all kinds of things -- belts, hairbrushes, pieces of wood, books... but even in my high school a few years later kids would get spanked with a paddle in front of the class if they offended the teacher in some way.... It was a different era.


Anyway, I guess you can say that my relationship with my father did mess me up a bit, because, although there was cruelty and irrational behavior, nevertheless, my father is where I get almost all of my creative side from. He knew how to draw, which always amazed me as a kid, and he had a love and knowledge of old movies and monsters and weird popular culture stuff that has come to define who I am, too. It's very complicated -- or rather it's one for the shrinks, I guess... I remember watching cartoons with him and he was able to draw the characters that were on TV as they appeared on the screen. That impressed me, I remember. I also remember my cousins watching in awe as he drew pictures of pirates or cowboys during one summer vacation. I think maybe that's when I realized that it was considered "cool". But he wasn't schooled in art, unless it was maybe some classes due to the GI Bill after WWII. He only had an 8th grade education and had done all this macho stuff like being in a post-war motorcycle gang, ala The Wild One, and being a lumberjack in the Pacific Northwest. I saw photos of all these adventures, or I may not have believed them myself.

Comments:
My dad was from old country also and had a temper, but only struck when I really went over the line. I didn't do that too often, believe me. He was a good man. Basically, he lost confidence if I acted like a dumbass, and was proud of me when I achieved anything. Just like the real world.

If you ask me, too many whiners these days blaming their parents and running for the the-rapist.

That's what I think, anyway.