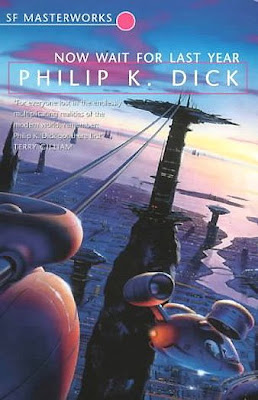 Control click above for 1977 PKD interview on Mike Hodel's Hour 25.

I met Philip K. Dick in 1969, and some months later, chance events interleaved so that I seemingly became a character in PKD's fiction. Or was it the reverse? Is the power and magic of a Dick novel so talismanic that it led me directly down causality corridors into his own past?

During a visit to Washington, D.C. in the summer of 1970, I had been reading the 1968 MacFadden-Bartell paperback edition of Now Wait For Last Year, Dick's tale of reconstructed pasts and time-travel via the JJ-180 drug. With me was Paula, and at my suggestion, she was also reading the book. She carried it with her as we traveled from museums to malls to restaurants, sometimes a planned route, sometimes drifting.

"What shall we do later today?" I asked.

"Well, I'm going to see my friend Margaret," said Paula, inviting me to join her. So later in the afternoon, we climbed into a cab. Unfamiliar with D.C. streets then, I had no notion of where we were headed -- only that I was to visit someone I'd never met at a house I'd never seen on a street where I'd never been. The taxi door closed, and I learned our destination for the first time when she said to the driver, "3039 Macomb Street."

But the address did sound familiar. Had I seen it before? Read it? I asked to see the novel in her purse and began idly flipping pages, dimly recalling that Dick might have used a similar address in his description of Wash-35, a “painstakingly elaborate reconstruction” of 1935 Washington, a "babyland'' where Virgil Ackerman entertains guests in a lifesize model of his own childhood world: 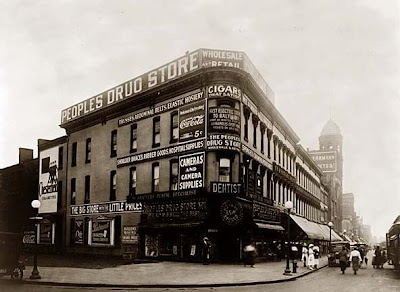 Here was Gammage's, a shop at which Virgil had bought Tip Top comics and penny candy. Next to it Eric made out the People's Drugstore; the old man during his childhood had bought a cigarette lighter here once and chemicals for his Gilbert Number Five glassblowing and chemistry set. "What's the Uptown Theater showing this week?"
As we rode down Connecticut Avenue, my eyes went to the paragraph on page 30 where "their ship coasted along Connecticut Avenue." We turned from Connecticut Avenue onto Macomb Street, and I noted the spelling discrepancy in this sentence:
The ship taxied from Connecticut Avenue onto McComb Street and soon was parking before 3039 with its black wrought-iron fence and tiny lawn.
The cab stopped. I looked up. There was the tiny lawn. There was the black wrought-iron fence. We were parked in front of 3039 Macomb. I held in my hands nothing more than ink on paper, an author's fantasy, but through the taxi windows I could see the sun shining through the trees and the "five-story brick apartment building where Virgil had lived as a boy." Past the fence, just as described on page 31, I could see the children playing at the doorway. In Dick's novel, these children are "robants in the shape of small boys," so I watched them closely as we walked past them, entering the doorway of 3039 Macomb for the first time, knowing I had walked through a Synchronicity Portal into PKD's version of reality. 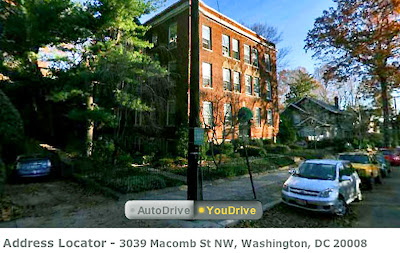 In Dick's The Man In The High Castle, Mr. Tagomi, referring to the I Ching, says, "We ask it questions as if it were alive. It is alive. As is the Christian Bible; many books are actually alive. Not in metaphoric fashion. Spirit animates it. Do you see?" I see. Had I read Now Wait For Last Year the previous year, or even a month earlier or later, the address in the book would have slipped by unnoticed. It could have sat inanimate on my bookshelf for decades, and what was buried on pages 30 and 31 would have remained unseen. Skim milk masquerades as cream.

It occurred to me later that the address might have been used in the novel because Virgil's past was, perhaps, Phil Dick's past, so I wrote to him, asking why he had chosen to fictionalize this real location. He responded, "I used that building and address because I had lived there in the Thirties as a kid. So you visited it... my god, that is eerie. Really freaks me. The ghost of a little boy who is now a middle-aged SF author must still be playing there."

I first told this story in 1982 in The Comics Journal, and two years later, Paul Williams reprinted it in the PKDS Newsletter (April 1984). Paul prefaced it with a facsimile reproduction of hand-printed sentences written by PKD at the age of seven or eight. Phil was seven years old when he and his mother moved to 3039 Macomb in 1935, and they stayed there until 1938. The paragraph confirmed the address, previously unknown to PKD readers:

Once there was an ant. One day he went walking. Soon he came to a forest. It was an ant-mile long. Soon he came to a sidewalk. In the middle was a dead bumblebee. He pulled and he pulled. And he soon got it to a forest. He went on ahead leaving his bee on the ground. But he saw that it was hopeless. The grass was to thick. So he left his bee and went home. By Philip K. Dick. 3039 Macomb St. N.W. D.C. I killed the bumble bee.

A few footnotes: I made the screenshot of 3039 Macomb by stepping into the "mirror world" of EveryScape. "Mirror world" actually sounds like something PKD might have concocted 50 years ago, but now it actually exists. EveryScape just got $7 million in venture capital funding to compete with Google Street View. Oddly, using EveryScape to go around Washington seems very much like the Wash-35 of Now Wait for Last Year. How did PKD know the future so well?

In the novel excerpt above, PKD mentioned the Uptown Theater and the Peoples Drug Store (which has no apostrophe). Only months after PKD and his mother moved into the Macomb neighborhood, Warner Bros. opened the Uptown Theater in DC on October 29, 1936, just around the corner from Macomb at 3426 Connecticut Avenue NW. It's still there today, the last movie palace in Washington still playing first-run films. The Peoples Drug Store was right across the street from the theater. (The one in the above photo was three miles away at 7th Street NW and Massacusetts Avenue.)

Comments:
Amazing. You never told me that one.

You've had some really fascinating postings in your blog, but this one really takes me off into another reality. Here's my story of synchronicity (sorry, not related to PKD). Some years ago I was reading a book while my son watched The X-Files on TV. I ran across a sentence in the book that mentioned the Trylon and Perisphere. For some reason my mind went blank as to those words and I had a conscious thought, "What are they?" Just then the character Mulder said, "The Trylon and Perisphere were symbols of the 1939 New York World's Fair." I had entered the world of the X-Files by having the character seemingly talk directly to me. ::X-Files theme song rises ominously in background...::

Here's footage of 1939 World's Fair, including the Salvador Dali Aquarium.

awesome.
You know, I've never read PKD.
Strange, but something has always held me back. I want to read him - its more a cloudy, dark feeling. Not bad, just confusing and heavy.