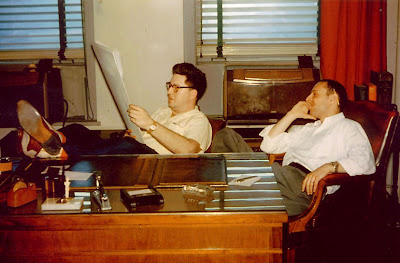 .
At the EC offices during the early 1950s, Bill Gaines and Harvey Kurtzman look over a completed story.


One influence on Harvey Kurtzman was the Yiddish entertainer Aaron Lebedeff (1873-1960), who was born in Gomel, Belarus, and immigrated to America via Shanghai in 1920. A star of the Yiddish theater and a comedic lyricist, he was still performing in the 1950s. In Mad #4 (April-May 1953), the name of the character Lamont Shadowskeedeeboomboom in Kurtzman's parody of The Shadow is directly inspired by a Lebedeff riff. Control-click on title above to hear a fragment of  Lebedeff singing "A Yiddish Leidele."

The article below in which Harvey Kurtzman explains the origin of Alfred E. Neuman was syndicated to newspapers February 6, 1975. He mentions Bernard Shir-Cliff who later became a contributor to Mad and Help! He did his own humor anthology, The Wild Reader (1956), before moving on as an agent and the editor of Warner Books. For more extensive research into the "What, Me Worry?" kid, see Maria Reidelbach's Completely Mad (Little, Brown, 1991).

Another of Kurtzman's inventions was the hand with six fingers. He drew this in an ersatz engraving style which added to the illusion. It must have been effective, because he was disappointed that no Mad readers commented on the extra finger.

That Face on Mad
by Harvey Kurtzman

There’s a question that nags wherever I go. Again and again I am asked, Where did Alfred Neuman come from? For those of you who didn’t hear a bell ring at the mention of Alfred N., he is the face you see on the covers of Mad magazine. And for those of you who ring, let me put the eternal question to rest, once and for all. 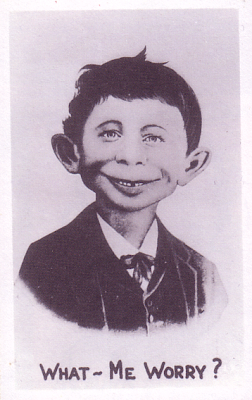 The face first came to my attention when I was doing the comic book Mad for publisher William Gaines in the middle fifties -- I think it was 1954. We were working with Ballantine paperback books on the first of a series of Mad reprint collections.

Since I was Mad’s chief cook and bottle washer at the time, there wasn’t a moment of my waking life that wasn’t devoted to the search for more and more Mad material. In this condition, and while passing the time of day in the office of an editor, Bernard Shir-Cliff, I noticed on the Ballantine Book bulletin board a postcard with this face. The card had some ad message--I don’t recall what. And the face itself was printed alongside in a space, maybe an inch by an inch and a half. The face was not unfamiliar. I associated it with the funny picture postcards in Times Square penny arcades and tourist traps, this one with the caption “What, Me Worry?” under the bumpkin portrait -- part leering wiseacre, part happy-go-lucky kid.

But what interested me about this Ballantine version was that of all the reproductions I remembered, this one looked like the authentic, original-source portrait -- the real goods. While everything I’d seen before was cartoon, this seemed to be a photograph of the actual face! So I pocketed the card and rushed back to the workshop where I inserted the “What, Me Worry?” face on and in subsequent issues of Mad magazine. I was very fond of plastering Mad with inanities -- items like Potrzebie, Melvin Cowznofski, Alfred E. Neuman. The readers apparently liked them. 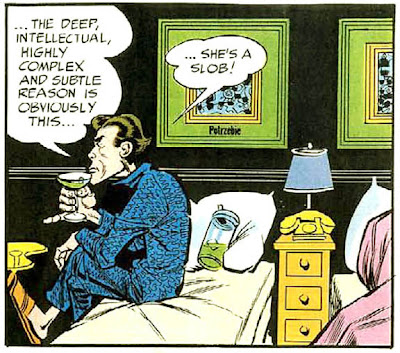 Alfred Newman (the late) was in reality a movie-music man whose credits were legion on the silver screen. Morgan would use the name for various innocuous characters that passed through his show, and I did in Mad, after Morgan’s fashion. And even though the face was, and ever would be, to me, a What, Me Worry? Kid, our fan mail insisted on calling him Melvin Cowznofski and Alfred E. Neuman. 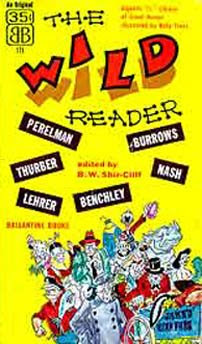 As a matter of fact, in the ensuing fan enthusiasm over the face, we ourselves became curious as to his genealogy, and in our letters page we asked the readers for whatever source information they might have.

The answers were astonishing. The face dated back to the 19th century. It was supposed to have been used for selling patent medicine, shoes and soft drinks. The kid was depicted as a salesman, a cowboy, a doughboy, and was rendered in dozens of slight to grossly altered variations. But the answer I have always liked to believe was that the face came from an old high school biology text -- an example of a person who lacked iodine. Whatever the truth might be, Mad adopted the face as its mascot, and we used it like a trademark on all our covers.

With the success of Mad, disputations arose. Readers laid copyright claim to the face, and eventually the issue went to court -- not to just any court, but to the Supreme Court of the land. In this lofty council, Mad won, once and for all, the right to use the face. The What, Me Worry? kid was permanently baptized Alfred Neuman by Albert Feldstein, the editor who came after me.

So that’s the story, once and for all. Don’t ask me any more. 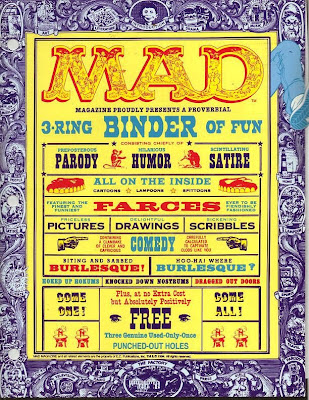 This is the title page of the Mad Style Guide which I edited for Mad in 1994. Notice Alfred at top and Bill Gaines in the upper right corner. In the lower left the border art is signed, "Kurtzman and Elder." The scan crops off the foot at upper right which has the word "Introduction" and was die-cut to go outside the trim edge of the paper.

Circulated for use by potential licensees, the book's three-ring binder format displays numerous images created for use on T-shirts and other products. Along with Mad words and catchphrases, it contains color guides, model sheets, logos and icons, plus new artwork by Sergio Aragones, Tom Bunk, Dave Manak, Angelo Torres and George Woodbridge. Some past covers of Mad were recycled by Torres who drew new versions of those covers as black-and-white line art for the Mad Style Guide.

Comments:
Hi. I enjoyed your post. I run The Ernie Kovacs Blog and mentioned it in my latest update.

You can always visit us at:

Thank you for the history lesson. I just started reading "The Ten Cent Plague: The Great Comic Book Scare and How it Changed America" and am hooked! I was born one month after MAD and always felt a certain kinship. Now I understand some of the "difficulties" the founding fathers of comic books went through. Heroes are found in most unusual places! Thank you! Lupin

Who did the classic brush-work portrait of Alfred E. Neuman? It looks like the work of Wally Wood, but I was never sure.

One of my early ambitions was to work at Mad Magazine. Actually, it had been a little refined... an earlier ambition was to work for the places that printed the funny papers! A natural progression, yes? Mad taught me critical thinking! As well as how to draw... and to love Yiddish. A brilliant magazine, sickeningly funny, too!
Marshall