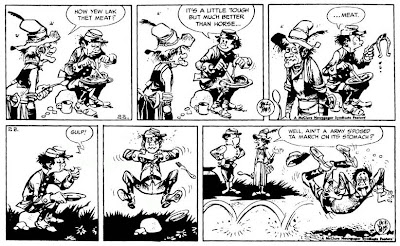 Click title above to hear Southern Soldier, the 2nd South Carolina String Band's recreation of a Civil War era camp band.
Beauregard! is a comic strip Jack Davis created in 1961. The setting was the Civil War, a favorite subject of Southerner Davis.  Never syndicated, it was handled briefly for four months by the McClure Syndicate, which dropped it after discovering that Southern newspapers did not consider the Civil War to be a joking matter. Davis later ran the strips as a feature in Help! and Sick. Here are two successive days.
¶ 1:46 PM

Comments:
I never found out if Will Eisner was involved in getting this strip off the ground, as he was the head of McClure at the time. Does anyone know?