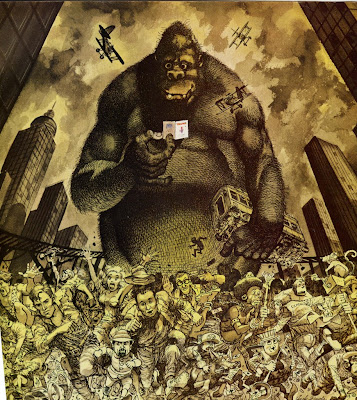 Despite the header above, Harvey Kurtzman's Trump magazine is not to be confused with Donald Trump's new Trump magazine. Actually, Donald Trump published two previous magazines with his name in the title, Trump Style (1997) and Trump World (2004).

After Kurtzman left Mad in 1956, he edited two issues of the glossy slick Trump for Hugh Hefner in 1957. Then it collapsed in a cost-cutting move. Interviewed by John Benson in 1965, Kurtzman recalled that Hefner's "attitude was that we didn't have any budget. We'd spend whatever we had to make a magazine, which is as it should have been. I mean, he was very right, and it would have been nice if he could have backed it up, but his intentions were the best."

To see a spectacular Wally Wood page from Trump, click on March 2007 in the Archives on right. Richard Corliss described the magazine in his Kurtzman profile, "Hail, Harvey!": 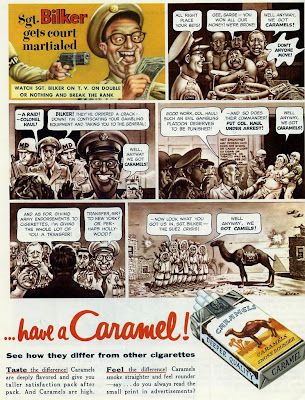 The cover of Trump proclaimed it "a new magazine which would like to say... mainly HELP!" And, in the Prospectus on page one: "This, then, shall be the purpose of Trump. Making money. You have the money, You give it to us." Hefner gave Kurtzman the money for Trump. Elder, Davis, Wood (briefly) and Al Jaffee gave Harvey their loyalty; they left the sure thing of Mad for the iffy proposition of Trump. Chester came along as managing editor, leaving the Mad house virtually untenanted... Trump sold for 50 cents, five times the cost of Mad two years before. It was lavish, offering in the first issue a panoramic watercolor foldout, painted by Elder and Russ Heath, of a Life-type Epic of Man, updated to the 20th century, and, in the second, a nine-page parody of Sports Illustrated whose cover image, "First head-on photo of a bullet taken without mirrors," shows the photographer, as reflected in the speeding bullet, screaming and dropping his camera. And it was good. Some pieces lodged in my funny-brain when I read in 1957 and have stayed there, for reference and refreshment. Elder's Beck (Breck) shampoo ad for three kinds of hair: Dry, Oily and No. The Ed Fisher cartoon showing a cowboy at an Indian reservation opening a rifle-shaped box marked farming tools and exclaiming, "Great Scott! Farming tools!" 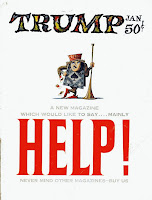 Davis' anti-hunting hunting story.Foremost, the Arnold Roth piece called "Russians Inventions We Invented First": vodka, borscht, Russian roulette and veto — "a word commonly identified with Russian U.N. delegation, was the accidental creation of Harry Thimk, sign-painter from Bushes, Florida" who tried to paint a VOTE sign but misspelled it. (Note the creepy presentiment in the town and state: In the 2000 Presidential election, the Bushes insured that Florida votes were vetoed.)
In the Jack Davis drawing at top, recognizable figures include Dave Garroway, King Kong, Tarzan, Rin Tin Tin with Rusty (Lee Aaker), the Trump mascot, Wrong Way Corrigan and Alley Oop. Can anyone identify the three figures in the left foreground? This 1957 drawing is curiously prophetic, since Garroway is shown holding a gun to his own head. In 1961, Garroway went into a state of depression after his wife's suicide, and on July 21, 1982, he did shoot himself in the head just as drawn by Davis 25 years earlier.

Comments:
Hoorah! Or is it HooHah?

That makes me very happy. I have both the TRUMPS and all the HUMBUGS I get nervous when I handle the old fragile paper, I will feel much better when I can get my hands on the hard-bounds.

This is definitely a most welcome collection... and about time too. Thanks for the news!

It will be especially interesting to see Humbug on a quality paper stock revealing some of the line work that was lost on the original low-grade paper used by the magazine.

I dunno if this question is still unanswered after three years, but the three figures in the left foreground of the Jack Davis giant ape art in Trump are the human stars of the 1933 King Kong: Bruce Cabot, Fay Wray and Robert Armstrong. Here's a link to a good pic of all three in character:

Great blog, by the way.