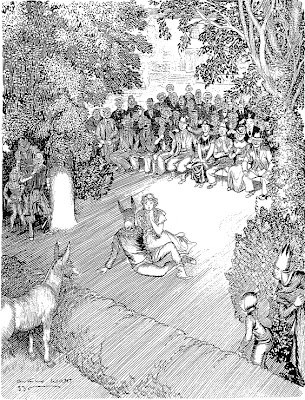 Arthur Watts (1883-1935) was a British illustrator who contributed to Punch until his death in a 1935 plane crash. Born in Chatham, Kent, April 28, 1883, Watts was the son of a Deputy Surgeon-General in the Indian Medical Service. He grew up "only wanting to draw." While a schoolboy at Dulwich College, his drawings were published in Boys’ Champion. He attended Goldsmiths’ College School of Art for two years. At 17, he went to the Slade School of Art where he studied book Illustration, continuing his education in Antwerp (at the Free Art Schools), Paris ("where I learnt little about drawing and a lot about living"), Moscow and Madrid.

He was 21 when his first cartoon ran in London Opinion in 1904, and soon he was drawing for Tatler, Bystander, Pearson’s and Strand. During WWI, he served in the Royal Naval Volunteer Reserve, taking part in the Zeebrugge raid and being twice awarded the DSO. He began with Punch in 1912, and his cartoons and drawings became a regular feature for the magazine in 1921.

He was noted for his birds-eye view drawings, an approach he developed in 1911 as a result of renting an attic studio in Hempstead. In addition to product advertisements, travel posters for railway companies and contributions to Radio Times, he illustrated a dozen books, including Thorndike and Arkell’s play, The Tragedy of Mr Punch (1923), and E. M. Delafield’s The Diary of a Provincial Lady (1930) and its sequels. He also edited and illustrated A Painter’s Anthology (1924).

His son, Simon Watts, offers a superb display of his father's artwork at this site: The Art of Arthur Watts. Simon Watts writes:
Class distinctions were social fault-lines that ran right through the Britain of the nineteen-twenties and thirties. Many of my father's cartoons show an acute observation of differences in accent, vocabulary, dress, drinking habits and even table manners. Some of his sharpest barbs are aimed at the "modern" art of the period. His contorted figures in paint, plaster and stone are clever caricatures of what he saw around him. The humour in my father's drawings is never spiteful or cruel. The figures he pokes fun at - the social climbers, the nouveau riche, the day trippers, the hen-pecked husbands and the affected young men - are still with us today. This is why so many of Arthur Watts' drawings are just as funny now as when first published.
Simon Watts' book, The Art of Arthur Watts, is available from Lee Valley. 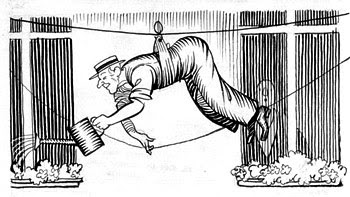