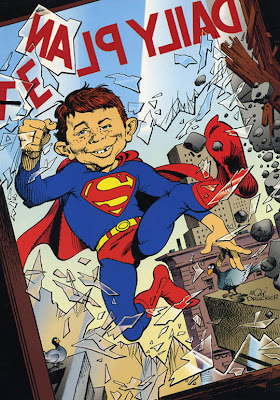 Click on title above for Diana Krall's Christmas Songs (2005). (Use right click or Control key to open Diana Krall music in a new window for continuous play while you read below.)
People are always asking me to write more memoir posts, so here's a look back at the 1990s, when I worked at DC Comics in a department headed by the artist Joe Orlando (1927-1998) and shared an office with the writer-editor Daryl Edelman. (See his story in Sex and Guts.)
After Orion Pictures went bankrupt in 1991, they eventually vacated offices at 1325 Avenue of the Americas, so an odd series of synchronous events resulted in Daryl and I working in a huge CEO-type office once occupied by some top Orion exec. It overlooked both the Sheraton and the Hilton, and the wide ledge with railing just outside the windows provided a covert perch for the Secret Service when Bill Clinton stayed in those hotels.

Each year, Joe's department had to devise the DC Comics Christmas card. One year, the idea was to have Charles Vess draw Swamp Thing as a Christmas tree, and during a meeting in Joe's office, James McCann wrote the clever pun, "Season's Greenings," for the card interior. After Mad publisher Bill Gaines died in 1992, Time-Warner eventually decided that Mad should be under the wing of DC Comics, and Joe was given the position of Associate Publisher of Mad.
For the 1994 DC Comics Christmas card, Joe wanted the long-time Mad cartoonist Mort Drucker to draw Alfred E. Neuman as Superman. I came up with the line, "What, Me Merry?" (see reduction of card interior below). Daryl got on the phone to contact Mort Drucker. Then came some problems. When it was all over and the card was printed, I stared at it in disbelief and said, "Daryl, this is really odd. There's nothing here about Christmas. No tree, no wreath, no Santa cap, nothing. We blew it." 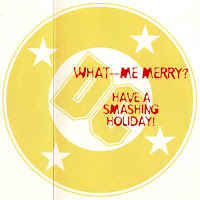 Looking at the card recently for the first time in years, I decided to email Daryl and ask him what he recalled about the creation of that card. Here's his memory of the event:
"Drucker would take no direction, and because he was Drucker, we let him do what he wanted. That's why there's nothing about the holidays in the card. I talked to him for a good half-hour on the phone. You were offering suggestions, and I kept shaking my head that he didn't want to do anything we asked. He said he would draw Alfred in a Superman suit, and that was all. I asked if he would at least draw him in a Santa hat. He wouldn't draw the Daily Planet, and that broken window with the backwards lettering was his compromise. We explained the whole episode to Joe, and when the drawing came in, Joe laughed and laughed. He liked it anyway."