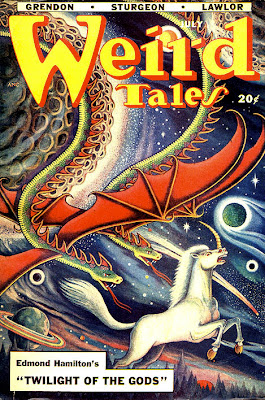 The illustrator Matt Fox was listed in The Who's Who of American Comic Books (1971). Below is the entry exactly as it appeared. The asterisk means he wrote it himself. The parenthetical (p) and (i) indicate pencil art and inks.

Updated and more extensive credits for Matt Fox can be found at Who's Who of American Comic Books: 1928-1999.
The year of birth means he would have been 60 years old when I met him in during the mid-1960s. This is odd, since I recall him looking much younger, very slim and fit. Attempting to reconstruct the meeting, I'm certain it must have been in the spring of 1966. Back then, on Friday evenings, I left the Port Authority in New York City and headed for New Jersey. In North Bergen, I got off the bus at North Hudson Park, where, according to UFO researcher Budd Hopkins, the owner of a Manhattan liquor store had a close encounter with "grey beings" in September 1979. From North Hudson Park, I walked half a block on Palisade Avenue to the house of Calvin Beck, publisher of Castle of Frankenstein. 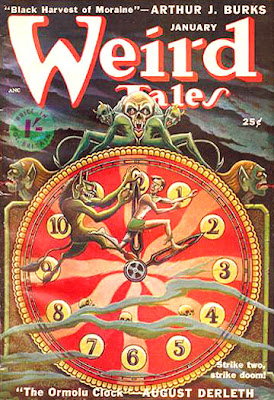 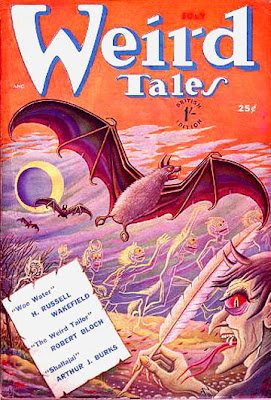 As the magazine's editor, I spent my weekends desperately trying to put together that publication with its zero budget and keep it on a quarterly schedule. The one year I almost succeeded, Calvin claimed the quarterly was a bi-monthly. It was like a race I could never win, a treadmill to oblivion.
During the 1960s, as a staff of one, I wrote and edited copy, proofread, selected photos, designed layouts and pasted up pages in Cal's downstairs workroom. The downstairs area had three rooms, a bathroom, a large closet, a countertop with a kitchen sink and many file cabinets filled with movie stills and manuscripts. However, it wasn't a basement, since it was on ground level with a door opening into the backyard. While Cal watched television upstairs, I usually worked downstairs while listening to jazz on the radio. 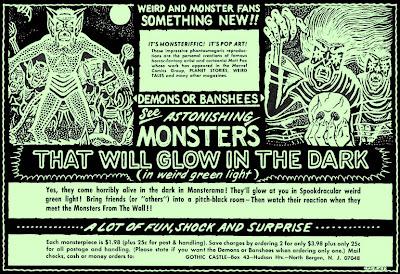 There were seldom any visitors, but one Saturday afternoon, I heard two sets of footsteps descending the narrow staircase. Cal squeezed past the water heater in the tiny hallway at the bottom of the stairs, entered the room with a big smile and introduced me to Matt Fox, whom I knew as one of the Weird Tales illustrators.
Fox came across as a straight-arrow, no-nonsense sort of a guy, and after a brief conversation about Weird Tales, he quickly got to the point. He was selling glow-in-the-dark posters, and he wanted to run an ad in Castle of Frankenstein. With that, he unfurled his glowing poster depicting demons and banshees dancing in the pale moonlight. We took it into a dark corner of the room, and yes, indeed, it did emit an eerie green glow.
He next produced an ad for the posters. He had made a negative photostat of his ink drawing, so the reversal of black to white simulated glowing monsters coming out of the darkness toward the reader. Clever hand-lettering effects added a subtle suggestion of glowing letters seen at night, not unlike the moment when Marion Crane first spots the Bates Motel sign through her car's rain-covered windshield.

The style Fox had used on this half-page ad fit in very nicely with the type of art that we occasionally ran in the magazine. I showed Fox how department headings were not permanent but alternated artwork by different artists. Then I suggested that he create some similar headings. He said, "Sure, I'll do those." Calvin was grinning and nodding enthusiastically. The idea of having a few contributions by a Weird Tales illustrator was a nice addition, but in retrospect, I have to wonder why Cal didn't have Fox create a series of Castle of Frankenstein covers as outre as the ones he had painted for Weird Tales. If Cal felt that Fox's art was not in keeping with a film magazine, then he could have given him space on the back cover as we had done with Hannes Bok. Given several odd incidents that ended with artists being underpaid by Cal, I can speculate that perhaps Cal offered Fox so little money that he refused to do a painting.
The cover of issue #8 was the magazine's third photographic cover. We had previously used color transparencies supplied by Columbia Pictures and American-International Pictures, but that cover of the eighth issue, showing a blood-covered Christopher Lee as Dracula, had a unique grainy and grisly look because it was an enlargement from an actual frame of film given to us by Russ Jones. Inside, the Matt Fox ad ran on the bottom of the last interior page. Fox's neatly rendered hand-lettered ad copy read, "Weird and monster fans... Something new... Demons or Banshees... See astonishing monsters that will glow in the dark (in weird green light)... A lot of fun, shock and surprise..." In the lower right corner was the signature "Matt.Fox," very tiny with a period inserted in the middle. Additional copy, written by Calvin, had been typeset and pasted into the ad:
It's monsteriffic! It's pop art! These impressive phantasmagoric reproductions are the personal creations of famous horror-fantasy artist and cartoonist Matt Fox whose work has appeared in the Marvel Comics Group, Planet Stories, Weird Tales and many other magazines... Yes, they come horribly alive in the dark in Monsterama! They'll glow at you in Spookdracular weird green light! Bring friends (or "others") into a pitch-black room –- Then watch their reaction when they meet the Monsters From The Wall!!... Each monsterpiece is $1.98 (plus 25 cents for post & handling). Save charges by ordering 2 for only $3.98 plus only 25 cents for all postage and handling. (Please state if you want the Demons or Banshees when ordering only one.) Mail checks, cash or money orders to: Gothic Castle – Box 43 – Hudson Hts. – North Bergen, N.J. 07048.
No one but Calvin Beck could ever have devised advertising copy with such a non sequitur notion as "Monsters From The Wall." Was he thinking of Charlotte Perkins Gilman's "The Yellow Wallpaper" (1892)?

That same issue featured Fox's ink and pebbleboard heading for "Ghostal Mail," showing a variety of demon onlookers as Dracula and the Frankenstein Monster peruse letters from readers. Curiously, he did this in two sections, so the lettering of the heading has a different background from the illustration and is separated from it by a thin white line. That heading and the ad were repeated in issue #9 (November, 1966).
The ad ran again in the 1967 Castle of Frankenstein Monster Annual Fearbook which displayed Russ Jones paintings on both the front and back covers. Along with the ad and the "Ghostal Mail" heading, that issue also had another Fox illustration, much larger, showing a demon chasing a terrified man across a cemetery where one of the tombstones carries the words, "Rest in Peace Matt Fox," That illustration had no display lettering, but I added large display type beneath it to make it work as a heading for the fanzine review column, "CoFanaddicts."
On the Saturday Fox arrived to drop off that cemetery illustration, it was the second time I saw him. I admired his tight rendering in ink and crayon on pebbleboard. Then I casually asked, "So how many orders did you get for the glow-in-the-dark posters?" He responded bitterly, "None." After that day, I never saw him and his demonic entourage again. He became the Phantom Artist, whereabouts unknown. Fox died in 1988, as noted by Marty Jukovsky in one of the comments below.

And your piece captures the essence of Cal Beck.

you can get the last Who's Who of American Comic Books on the web at
www.bailsprojects.com

(note: I was a senior editor of the Who's Who; so I liked it a lot)

Bhob - I was just re-reading this (really one of my favorite posts of yours) and I wanted to thank you. I've loved Matt Fox's work ever since I first saw Weird Tales and I was always desperate to know more about him. Does anyone have the original ad?

... I'd do anything for one of those posters!

The publisher Dennis Druktenis acquired the back issues that Cal kept in his garage. As for the Castle files, where the original Fox art was kept, I'm not sure. You could check with Druktenis or keep an eye on eBay. In March someone pointed out to me an eBay item: a letter to Beck from the illustrator Henry R. Martin. Possibly this came from Cal's files?

Is there anyone writing a book about Matthew Fox? I understand that he illustrated other matters, not just comics.