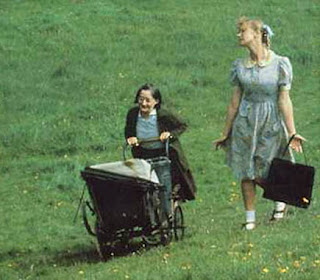 Into my heart an air that kills
From yon far country blows:
What are those blue remembered hills,
What spires, what farms are those?

That is the land of lost content,
I see it shining plain,
The happy highways where I went
And cannot come again.
--A.E. Housman (1896)

"When we dream of childhood," said Dennis Potter, "we take our present selves with us. It is not the adult world writ small; childhood is the adult world writ large." Potter viewed childhood as "adult society without all the conventions and the polite forms which overlay it," so the cruelty of children emerges in Potter's Blue Remembered Hills (1979), a theme also explored by Ray Bradbury ("The Playground") and Margaret Atwood (Cat's Eye). For Blue Remembered Hills, Potter employed the device he had introduced 14 years earlier (in Stand Up, Nigel Barton): children's roles were cast with adult actors, providing "a magnifying glass to show what it's like to be a child" in this naturalistic memory drama of a "golden day" that turns to tragedy.
On a sunny, summer afternoon in bucolic England of 1943, seven West Country children (two girls, five boys) play in the Forest of Dean. Their games and spontaneous actions (continuous and in real time) reflect their awareness of WWII, but no adults are present to intrude. As the group moves through the woods and back to the grassy hills, their words and actions illustrate how "childhood is not transparent with innocence." When the two girls (Helen Mirren, Janine Duvitski) push a pram into a barn to play house, the casting concept is heightened, doubling back on itself in a remarkable moment: adults are suddenly seen to be acting as children who are pretending to be adults, and lines from Housman echo across the years.
Cast: Colin Welland (Willie), Michael Elphick (Peter), Robin Ellis (John), John Bird (Raymond), Helen Mirren (Angela), Janine Duvitski (Audrey), Colin Jeavons (Donald), Dennis Potter (Narrator). Potter reads the Housman poem at the conclusion.

Oddly reminiscent of Potter and Housman is this video of Glósóli by Sigur Rós, filmed in Iceland in August 2005 by directors Stefan Arni and Siggi Kinski with Swedish director Ted Karlsson.

For commercials and more music videos by Arni and Kinski, go here.

The same year that Housman wrote his poem, Ernest Dowson (1867-1900) wrote the poem that gave JP Miller the title for his Days of Wine and Roses teleplay (originally on Playhouse 90 in 1958). The poem's title is from Horace's Ode I and translates as: "The shortness of life prevents us from entertaining far-off hopes."
Vitae Summa Brevis Spem Nos Vetet Incohare Longam
They are not long, the weeping and the laughter,
Love and desire and hate;
I think they have no portion in us after
We pass the gate.

They are not long, the days of wine and roses:
Out of a misty dream
Our path emerges for a while, then closes
Within a dream.
-- Ernest Dowson (1896)