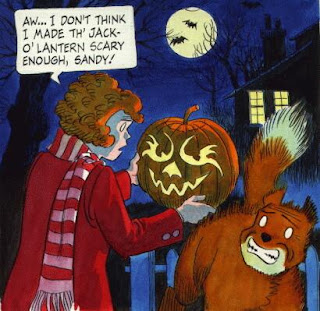 I think we need a real-life horror story here for Halloween.

My memory of the incident below came back while I was reading about the death of Carol Gotbaum in the Phoenix airport. Her handcuffs were secured by a short chain attached to the back of the bench where she was sitting. She probably died when she twisted around, found the chain pressing against her neck and then was unable to move from that position.

My own situation was more akin to Edgar Allan Poe's 1838 short story, "A Predicament," in which the narrator climbs the interior of a Gothic cathedral. Here is the Black Mass audio adaptation. After the narrator sticks her head through a hole in the face of the steeple's gigantic clock to admire the city, she soon discovers that the clock's immense steel minute-hand has moved against her neck, pinning her with no escape:
"Turning my head gently to one side, I perceived, to my extreme horror, that the huge, glittering, scimitar-like minute-hand of the clock had, in the course of its hourly revolution, descended upon my neck. There was, I knew, not a second to be lost. I pulled back at once–but it was too late. There was no chance of forcing my head through the mouth of that terrible trap in which it was so fairly caught, and which grew narrower and narrower with a rapidity too horrible to be conceived. The agony of that moment is not to be imagined."

When I was in college, I had some classes in a towering 19th-century Gothic building constructed in 1889. One day, I found myself alone in a room in that building with Lyn Murray, an instructor I disliked. It may be that he sensed my reaction to him. While we were talking, I sat on a radiator with my back to a window about six inches behind me. The radiator had a metal radiator cover on top. Murray suddenly decided it would be amusing to act like he was pushing me out the window. I guess the fact that we were one flight up made it more amusing to him. He moved toward me with a big grin on his face and grabbed both of my shoulders.

When he pushed me back towards the window, I reached to hold on as a natural reflex. I put both hands between my legs and grabbed the front edge of the radiator cover. It was then I realized that the metal cover was not attached but was just loosely positioned on top. As he pushed, it tilted backwards. When he released my shoulders, the heavy object swung back down.

As it fell into place, my left hand was pinned, and I felt excruciating pain as my entire body weight and the weight of the metal cover were both pressing a 1/4th-inch wide front metal fringe against the fingers of my left hand. I knew instantly that I could not roll forward, as it might break my fingers (and I would fall face forward toward the floor). I could not go backward because I would then be pulling in the wrong direction from where my hand was caught (and possibly could actually go out the window). I could not bring my leg under my arm. I also felt like my fingers might break with any extra movement. I calculated all options in a split second and knew they would all fail. I was trapped.

I could see only one solution. He was standing in front of me, looking in horror at the expression on my face, as I gasped, "Lift me up." Without hesitating, he grabbed me under the armpits and pulled me straight up. As he did so, I managed to pull the radiator cover up an inch, and my hand slipped free. The cover crashed back into place. My fingers were intact, and I stood there rubbing them until the pain went away. Speechless, he stared aghast at my reddened fingers, probably thinking that if I went to the college clinic, his teaching career would be over.

It had all happened within 15 seconds. There were no witnesses, and it may be that I never discussed the incident with anyone. If such a situation happened at a college today, a student would probably call a lawyer and sue the school for $20 million.

Comments:
That day was about to be like any other day, which would blend in your other days of class, research, study, and go to bed; and would have blended in with the rest.
But however painful and horrifying it was, you will probably carry the memory of that conflict with you until your last breath.