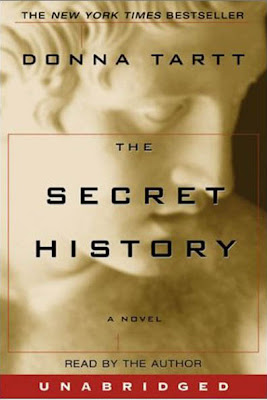 With a theme of guilt, the brief animation near the bottom of this post is Prologue by Luke Weatherill, a 21-year-old UK student in Leeds. His animation is based on Donna Tartt's psychological literary thriller, The Secret History (Knopf, 1992), set at a thinly disguised Bennington College. She spent 14 days recording the unabridged audiobook of the 592-page novel. Listen to her read the beginning of the novel, which is told in first-person by the male narrator. Richard Pepen is 28 years old, looking back at events that happened when he was a 19-year-old college student.
She talked about this character in a 1992 BBC interview: "He's a young man from a very bleak, suburban, lower-class California background -- Silicon Valley, shopping malls and all that. Highly intelligent and clear thinking but still very much an adolescent. Self-centered, ambitious, vain. He just hasn't seen as much of the world as he'd like to pretend he has, and in spite of his intelligence he's also very impressionable. When he leaves home for the first time, at the beginning of the book, he's dazzled by really the absolutely worst sort of crowd and doesn't realize what these people are and what he's gotten himself into until it's too late. At bottom, humans are pack animals, and people are much more prone to behave monstrously as a group than they are on their own. So this very intelligent but naive young man is sort of beguiled by these people he admires into doing something that's going to ruin the rest of his life.
"The first half of The Secret History is about how this happens. It's about the narrator's seduction into evil, very gradually and without his realizing it, and I hope without the reader realizing it either. One of the most insidious things about evil is how, at the start, it can make itself appear very enchanting and delightful, and then only when it's too late does one see what one's become. The second half of the book is basically about the curtain falling away and his realization that what he's actually done is help to murder one of his friends... Not an unlikeable young man. He's funny, he's intelligent. I think he's actually quite a sympathetic character. What I hope is that readers will find themselves seduced along with him and share his horror at seeing what's actually been happening without anyone noticing it. He had to be male basically for the dynamics of the story to work as they did, but it would just have been a very different novel if the narrator had been female... This a novel, not an autobiography. I'd be quite limited as a novelist if I only wrote stories about young women who lived in Greenwich Village and smoked too many cigarettes...
"All of them are young, rich, intelligent, charming, very well socially connected. They lead very studious, very sort of pastoral lives; the school is out in the country. They're also incredibly arrogant, both intellectually and morally. They study Classics; that's their great passion, and they take it deadly seriously. But they're young, they're callous, they don't temper their studies with any sort of balance or humanity. They live in a kind of a solar system of their own making, and they really have just very grandiose ideas about what it's possible for human beings to do. Only extremely young people have this kind of arrogance. They're very intolerant of imperfection. They want to root out their own perfections by force, and they're not tolerant at all of imperfection in others. There's something Nietzche once said about the Greeks, which is kind of appropriate in this context: 'The unsubdued search for knowledge in itself barbarizes just as much as hatred of knowledge.' And in this effort of trying to civilize themselves or tearing out their imperfections they also manage to destroy a lot of their humanity.

"Bunny is just this very sort of bumbling, comic, pontificating, character. Typical product of a second-rate, American boarding school. Superficially, as far as education and social position go, he's very much like the rest of them, but actually he's far less intelligent. The kind of person you just know is going to be this useless alcoholic fixture at the country club by the time he's 35. Henry's a perfectionist, really kind of inhuman, very brilliant, very erratic and enigmatic. He's a stiff, cold person, Machiavellian, ascetic, and he's made himself what he is by sheer strength of will. His aspiration is to be this Platonic creature of pure rationality, and that's why he's attracted to the Classics, and particularly to the Greeks--all those high, cold ideas of beauty and perfection. I think it's what in the end that gets him into trouble. 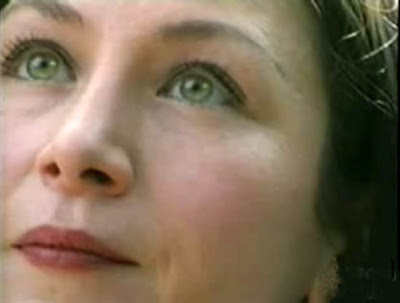 "Literature today seems to be divided into two camps: extremely literary work, with lots of emphasis on technique and style and so forth and then these sort of popular blockbusters, and I know at heart I'm a manic stylist. I love a beautiful sentence, a well-constructed paragraph, some gorgeous turn of phrase that'll just make you sit back in your chair and say oh-oh. But unfortunately I think a lot of books that are well constructed are really very self-involved and don't take the reader very much into consideration. Technique and everything aside I think that when you get right down to it people read because they want to be entertained, and I don't see any reason why a piece of work can't be entertaining but also, yes, very well put together. I think it's a very accessible book. I wanted to write a book that really did have a wide appeal, a literary book, but not an elitist book, and I've really been surprised at the wide variety of people it has appealed to."

In the middle of this RTE TV panel discussion, there is a clip of Donna Tartt reading from her second novel, The Little Friend.