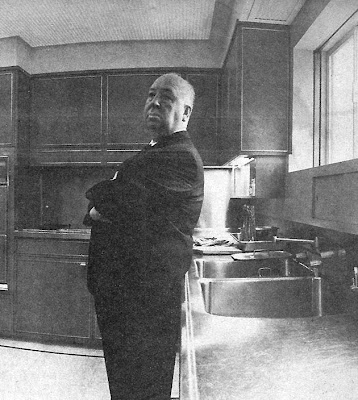 .
People are always asking me to write about the magazine Castle of Frankenstein and its publisher, Calvin Beck. So here's a journey back into that past, the curious tale of an Alfred Hitchcock photograph we ran in Castle of Frankenstein during the early 1960s.
The magazine was assembled in the basement of Calvin's house in North Bergen, New Jersey, and back then, Ken Beale would sometimes arrive with stills, copy or clippings. One weekend he walked in, snapped open his briefcase and pulled out a photo of Hitchcock leaning against a kitchen sink. "I found this on the subway," said Ken. "It was lying on a seat on the F train, so I went over to see what it was." The photo was curled up because it had not been treated correctly when developed. I tried to smooth it out by taping it to a board on all four sides. Even though it was beginning to show a pale tan tinge, I liked it and immediately inserted it right into the layouts along with a pun-filled caption. It was published in Castle of Frankenstein #4 (1964). When the paste-ups came back from the printer, I could see that the photo had started to fade. Eventually only faint traces remained, and when it finally faded into nothingness, I threw it away.
As summer began in 1964, I was ending my first year of working at TV Guide in a position they called Movie Editor. It was a job I had taken mainly so I could go to the various press screenings around the city. Eventually, however, I caught almost all the new foreign films and began to ignore the more lightweight Hollywood releases. Why sit through Under the Yum Yum Tree if you could see Knife in the Water or a new film by Leopoldo Torre Nilsson?
In June of that year, I went to a screening of Hitchcock's Marnie in the tiny theater beneath the RCA Exhibition Hall (the location during the 1950s of the Today Show's glass-enclosed studio). Marnie press kits were being snapped up as I walked in, and I managed to pry the last one from the grip of a reluctant publicist by mumbling the magic words, TV Guide. Looking through the press kit, I read an entire page about Hitchcock's restaurant-style kitchen. It was unusual because almost no homes had stainless steel countertops back then.
It was obvious that the photo Ken had found in the subway was originally intended to illustrate that page, but instead it had been eliminated during the final selection of the press kit stills. Perhaps Hitchcock had second thoughts about sharing a glimpse of the kitchen in his Santa Cruz house with anyone other than such invited guests as Hume Cronyn, Princess Grace and Prince Rainier.
Hitchcock's house was restored by Bob and Judy Brassfield in 1978. Two years ago, in the Santa Cruz Sentinel, Peggy Townsend wrote:

One of Hitchcock’s biographers described lush meals and fine wines at the home, noting that cocktail hour was usually 90 minutes long, with Hitchcock declaring that a martini was "simply two parts gin to one short glance at a bottle of vermouth." Actor Hume Cronyn, who spent a weekend at the house, remembered how Hitchcock would take "a marvelous, malicious delight in seeing his guests fall apart with all those vintage wines and liquor he’d force," according to reports. Both Hitchcock and his wife were wonderful cooks, often retreating to the kitchen with its stainless steel counters and industrial-size stainless steel sink to make meals — even though they had a cook, according to their daughter. The Brassfields have replaced the kitchen’s stainless steel countertops with cafe au lait-colored tiles and rich wood, but they kept the original stove: a big, propane-gas-powered O’Keefe and Merritt. Out the window are gardens that now require two gardeners that come three days a week to keep up. We head outside. The Hitchcocks surrounded their home with gardens designed in meticulous detail by the late Roy Rydell, an artist and landscape designer who had a hand in how Pacific Avenue in Santa Cruz looked before the earthquake of 1989. When the Brassfields came, there was a lot of overgrown and dying plants, they said. They hired their own designer who kept some of the oleander and pyracanthus, but added a Mediterranean style. A huge jasmine scents the entryway to the garden.
The stainless steel countertops are gone. So is that fading photo print. Perhaps the original negative is lost in some forgotten corner of the Universal Pictures vaults or tucked away on a shelf in the Museum of Modern Art still archives, but I've never seen the picture printed anywhere except in Castle of Frankenstein. So I scanned it a few hours ago, gave it some restoration and now send it forth. Here it is, direct from the 1964 F train to you. Click to enlarge.

Comments:
I just loved this story, very entertaining and the Lost and forgotten photo of Alfred Hitchcock's made my day, I came very close to grabing the paints and start slinging the colors.

My friend, Jim Moseley, editor of Saucer Smear, remembers Calvin Beck as a pathetic soul. He spoke of Beck coming to parties and eating as though he had not had a meal in weeks.

I wish you would write more about the COF days, Bhob. The magazine affected me greatly as a kid (for some reason the Green Hornet issue lives in my mind as a terrifying childhood memory).

Much of your work sunk into pop culture and will live there forever.

I remember Moseley. I went a few times to the saucer seminars he held at some NYC hotel. What hotel would that have been? What was the name of that group?

His description of the hoax with Gray Barker is a terrific story.

The line about "eating as though he had not had a meal in weeks" doesn't ring true and is misleading. Cal and I ate at a variety of places around NYC and Jersey. Often we went to the Fort Lee Diner right near the Jersey entrance to the George Washington Bridge.

The way Moseley described Beck to me, I got the sense that this was in his latter years and I distinctly got the idea that Beck and his girlfriend (as Moseley remembered but perhaps actually his wife) both seemed extremely hungry and there for the free meal.

Jim's group was called the National UFO Conference (NUFOC) as I recall. His 1st NY conventions were given a big boost by his appearances on the Long John Nebel Party Line Program.

In regards to the Straith hoax:

A friend of mine recently did a documentary on flying saucers (for the Day the Earth Stood Still DVD) and interviewed a fellow from the George Adamski Foundation. Amazingly, they still have the hoax letter (which is shown in the documentary) and it is in superb pristine condition--it looks like a letter sent yesterday. One imagines the reverence they must have for the sacred artifact.

An uncle of mine, Ray Shea, did film titles (for onscreen use) and those ornate opening-night theater displays. I visited him in CA (he's long since passed on) and he was thrilled that I knew Saul Bass' name; he used to work with him.