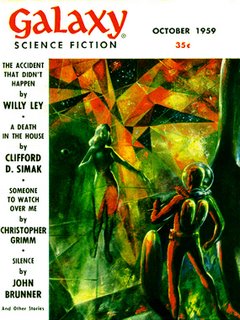 Wallace Wood: Against the Grain, part 34 “Fast and prodigious” actually meant a grind, a treadmill of pages, as Jim Steranko wrote, “A typical work week was two, perhaps three times longer than most others’. Twenty hours at the board was not uncommon. He battled deadlines with gallons of coffee and carloads of Marlboro cigarettes. Wood developed a permanent squint against the smoke, and often met his deadlines in a zombie-like state of exhaustion. He drove himself with a reckless and relentless inner fury that was hidden behind the soft voice and quiet demeanor, a trait he learned from his mother. He also found it impossible to show anger.”  ¶ 10:12 AM 0 comments 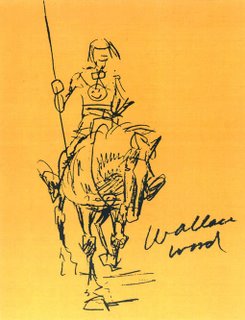 Wallace Wood: Against the Grain, part 33 Prior to the Fifties, most comic book artists worked with a degree of anonymity. But Wood’s innovative work for the early Mad, his easily recognizable style of obsessive detail and his unusual signature, combined with the 1952 “Artist of the Issue” page and the self-portrait seen in “My World” (Weird Science 22), made him the first true celebrity among comic book artists. Weird Science 12 was pulled off shelves and reopened to the inside front cover as readers attempted to glean the few available facts: “Wally today stands 5 feet 10 inches high, weighs 145 pounds, has brown hair, blue eyes, and a ‘Frank Sinatra’ build!... As Wally puts it, ‘After being exploited by nearly everyone in the business, I finally found my home at good old EC!... Wally’s hobbies include travel, home movies, collecting records (especially folk-songs) and folk-dancing!... Wally is a fast and prodigious worker...”  ¶ 10:08 AM 0 comments 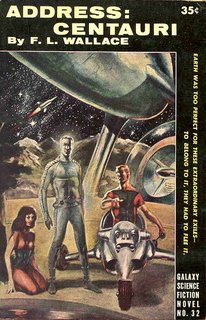 Wallace Wood: Against the Grain, part 32 One of the things Wood wanted to do was expedite the work by employing Tatjana as a penciler, but there was some objection to this at EC. “I started penciling backgrounds,” she said. “I remember one story in particular, ‘Carl Akeley’ in a Kurtzman book (Two-Fisted Tales 41). I worked from swipe. I can’t draw, but I have a very good eye, so I can copy things and even change them. I penciled quite a few of those elephants and other animals. Wallace mentioned this to Harvey Kurtzman after the story came out, and Harvey was not pleased that he didn’t do it by himself. Then, little by little, aside from ruling lines in ink, I got very good control with my brush in freehand. So I helped in that respect.”  ¶ 7:22 AM 0 comments 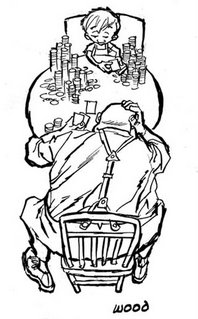 Tuesday, February 06, 2007
Wallace Wood: Against the Grain, part 31 EC’s system of pre-lettered pages appealed to Wood, who adopted this approach as his own personal method over the following decades. After Leroy lettering by Jim Wroten (on the Feldstein-edited titles), the pages were passed on to the artists. “I think this had a lot to do with why the stuff was as good as it was,” said Wood. “When we got those pages, lettered and all, all we had to do was go home and draw and not worry about a thing. We didn’t have to show pencils. We brought in the finished product, and we could do just about anything we wanted to do.”  ¶ 11:58 PM 0 comments 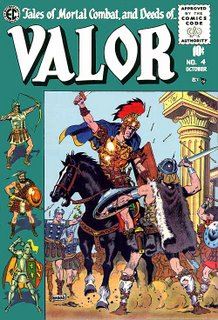 Wallace Wood: Against the Grain, part 30 In 1954, when Wood saw Them and lampooned it as “Them There Those” for EC’s Panic (#7), the furniture of their West 74th Street apartment began to vanish beneath layers and layers of celluloid sheets for EC’s 3-D books, as Wood described in 1972: “Besides drawing it, you had the technical problem of figuring how these things were going to overlap. The safest way to do that was to draw every figure complete, even the ones that were behind the other figures. Then you had to opaque them like cels, paint every figure white behind. So my whole apartment—the floors, the sofa, the chairs, everything — was covered. And this stuff didn’t dry! It was a job.”