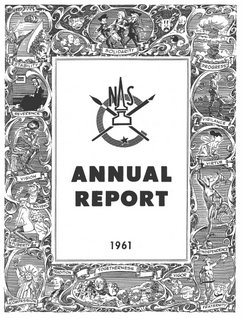 Sunday, January 28, 2007
Wallace Wood: Against the Grain, part 29 In May 1953 the couple left Rego Park and moved back to Manhattan, renting an apartment on West 74th Street at Columbus Avenue. They lived there for the next 15 years. “I remember sometimes on a hot day we would sit out on the fire escape after we moved here,” said Tatjana. “About 12 o’clock at night, we would look at each other and say, ‘Let’s go to a movie.’ We would go down to Times Square. In those days there were still some of the theaters that were relatively decent, although most of them smelled of disinfectant and urine. Every so often, late at night, we would go to 42nd Street and see the movies after midnight. During the day, there were even a few moviehouses that I would go to by myself. We saw quite a few movies, because we were not among the early people to get a television. I remember seeing all kinds of science fiction, which is not my genre, but I’d always trek along. We saw Them, with the little girl wandering out in the desert; Wallace drew that.”  ¶ 10:50 AM 0 comments 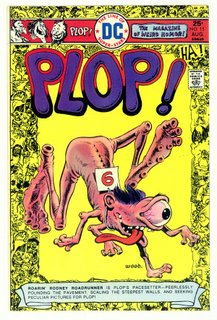 Wallace Wood: Against the Grain, part 28 Sometimes Woody and Tatjana traveled together to Lafayette Street. “I would go with him a lot of times down to EC when he delivered the work. I wouldn’t necessarily sit there while they were looking at it. Maybe I was talking to Gloria Orlando or some of the other people. Generally, he would get very good reactions — laughing and pointing at things that he had put in, those thousand and one little sight gags. The outfit was really Bill’s whole life. He would do things like invite the whole crew, the artists and wives and girl friends out for theater-going or dinners or all kinds of outings like that.”  ¶ 3:16 PM 0 comments 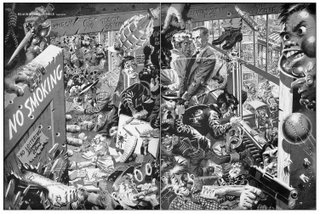 Wallace Wood: Against the Grain, part 27 J. Hoberman, in Artforum (February 1982) wrote, “Mad pushed certain aspects of the medium to their limits: Wallace Wood’s ‘Sound Effects’ (Mad #20), for example, is a hard-boiled detective story told, without dialogue, over a succession of ear-splitting graphics. The (Tex) Avery techniques of direct address and interpolated messages were totally integrated into the Mad house-style, which was itself deconstructed in Wood’s ‘Julius Caesar’ (Mad #17)... Wallace Wood, who specialized in pygmy cretins, overstacked dolls, and frames with the visual consistency of an exploding spittoon, represented Mad at its most aggressively tasteless...” Cartoonist-publisher Denis Kitchen (in A History of Underground Comics) stated flatly, “No one today is turning out anything to compare with the stuff Wally Wood, Jack Davis, Will Elder, et al. were doing in the early Fifties.” But Wood himself, in 1972, had only this laconic comment: “I like the funny stuff because it’s less effort, you know.”  ¶ 6:13 AM 0 comments 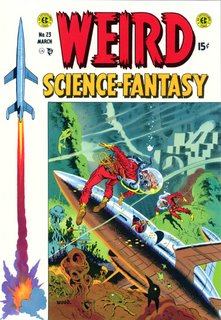 Wallace Wood: Against the Grain, part 26 His distinctive covers for EC’s New Trend began with Weird Science 9 and led to the one Wood considered his best EC cover, the drowning spacemen on Weird Science-Fantasy 23, illustrating Al Williamson’s “Fish Story.” For Mad Wood produced humorous illustration that Harry Harrison called “incredibly good” and Steranko described as “blindingly original,” pages that revolutionized comic art and influenced a generation of cartoonists, such as Skip Williamson, who said, “The early Mad comics were a big influence around that time. I would trace the drawings of Jack Davis, Will Elder, and Wally Wood. When I was in grade school and later in high school, there was a core of guys, there were three of us, and we were totally fanatic about Mad.”  ¶ 9:56 AM 0 comments