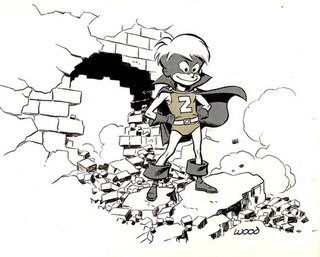 Sunday, November 26, 2006
Wallace Wood: Against the Grain, part 22 The Orlandos married on exactly the same day that Glenn and Eleanor Wood married—a coincidence that was totally unplanned. The two weddings happened in different parts of the city. Woody served as the best man at Glenn’s wedding, which was immediately followed by a wedding party at the Rhinelander Restaurant in Yorkville.

After quitting her job in 1951, Tatjana began assisting on her husband’s artwork. “I would fill in blacks, rule borders and rule lines and erase endless pages. Wallace would make Xs for places for me to fill in the blacks, and there was a story published with the capitol of Washington with all the windows Xed in; nobody had caught that they weren’t blacked in. I don’t remember what story it was.”  ¶ 8:59 PM 0 comments 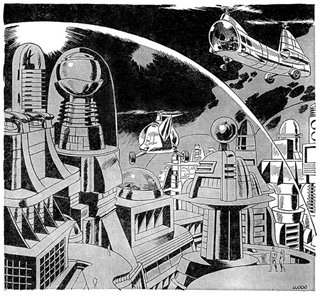 Sunday, November 05, 2006
Wallace Wood: Against the Grain, part 21 Joe and Gloria Orlando married on September 15, 1951, shortly after the publication of “A Mistake in Multiplication” (Weird Fantasy 9), his solo premiere at EC. The story marked the end of the Wood/Orlando team. “The publishers liked the look of our work, and that was due, a great deal, to Wally’s inks. I wasn’t able to ink at all, and that got me worried. In those days the artist did everything but letter, and sometimes even that. On Wally’s suggestion I went up to EC, and I was afraid they wouldn’t like my inks. When I turned in my first job, Gaines and Feldstein said, ‘Great! Another Wally Wood!’ I guess they liked him. A talented guy. I owe a lot to him.”  ¶ 1:37 PM 0 comments 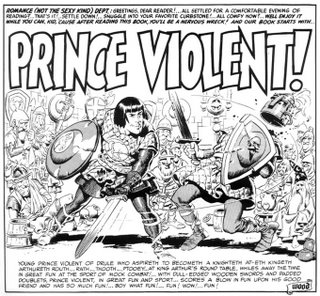