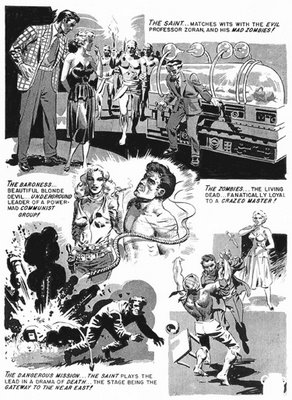 Wednesday, September 27, 2006
Wallace Wood: Against the Grain, part 16 In addition to the Avon jobs, Wood was now fully entrenched at EC, contributing to all of EC’s 1950-51 titles and proving he could produce quality work in any genre — from horror (Vault of Horror, Haunt of Fear, Tales from the Crypt) and science fiction (Weird Science, Weird Fantasy) to crime (Crime SuspenStories) and war (Two-Fisted Tales). This relentless drive to establish himself in the comics industry had prevented him from taking a honeymoon trip, but in the summer of 1951, Tatjana and Woody left for a West Coast vacation. “It was our honeymoon, so to speak,” said Tatjana. “Glenn’s car was out in Menahga, so we flew out there. From there we drove to the West Coast—from Minnesota to Iowa, through the Rockies, down through the Grand Canyon, across to LA and then up the coast highway to San Francisco. There we visited some friends I had from Holland, and then we drove all the way back here. Wallace was the driver, because to this day I do not know how to drive. I was the navigator. We arrived in Denver very late in a thunderstorm, and we didn’t see anything coming into town. Next morning we hit the road, and it was the most beautiful, clear sunny day. I nearly ended us up in a ditch because suddenly I saw the Rockies, and I shrieked! There we suddenly were, not having seen anything arriving. He made some 8mm movies at Yellowstone with the bears coming real close to the car. There was one shot: He was sitting in the driver’s seat, and I was sitting next to him. I was rolling the window up in a hurry, because the bear was leaning on the window. He had a shot of that with my horror-filled face. We got those cameras from Bill Gaines.”  ¶ 8:25 PM 0 comments