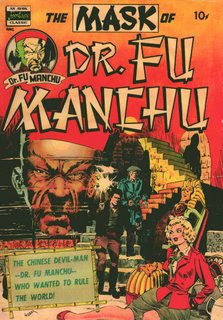 Wallace Wood: Against the Grain, part 15 When Orlando fled the boredom of the Long Island stockroom and returned to the creative electricity of West 64th Street, he was surrounded by stacks of Rocket to the Moon and Mask of Fu Manchu pages: “We were doing art for Avon, run by Sol Cohen. He loved our work. Sometimes the publisher didn’t like something we had done. We did a Fu Manchu cover that the publisher rejected, so the cover that was printed was our second version. It was really nice; I remember it had a large face and big hands with claws. Most covers were submitted in same-size, color-sketch form prior to our doing them. They had guys like Everett Raymond Kinstler working for them; we knew we were in good company. Fox was really the bottom of the barrel. Avon had a better line with better distribution. With Fu Manchu Wally did the bulk of the book; I penciled a couple of pages, and Sid Check did a couple. I remember doing the garden scene. It was a team effort. When I brought in Captain Science Wally went through the roof. We really wanted to do the book, but our backlog was staggering. I was very paranoid about getting enough work, so I took anything I could get my hands on. It got so heavy at times we would work in Army shifts, sleeping two hours and then slapping each other with wet towels to wake up. If a job really got late, we would pencil and ink one page at the same time. I had a lot of fun with Captain Science. By that point we had a pretty good idea of how to do comics, but we were still experimenting. It was very exciting. We knew Wood was the master, and we respected him.”  ¶ 10:30 AM 0 comments 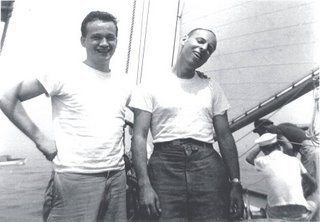 Wallace Wood and Harvey Kurtzman in 1955.

Wallace Wood: Against the Grain, part 14 Spending long hours at the drawing board, Woody had finally gained recognition as one of the leading new talents in comics, and he now began to pace himself at the steady rate of three finished pages a day. Years later, he looked back at his 1950-51 display of energy as his most prolific and productive period. “My Avon period... I was working for EC at the time, and Captain Science, and one other company, and I did a page a day for each of them.” Since childhood he had also been writing comics as he roughed, and his ability in this area was evident at EC when the New Trend began. “Let’s see, I wrote the first one, “Dark Side of the Moon” (Weird Fantasy #15, 1950) was it? I did suggest the ideas for several of the stories which Al wrote.” For Weird Fantasy he also scripted “The Enemies of the Colony” (#8) and plotted “Deadlock” (#17, 1950) and “Rescued” (#18, 1950), later scripting “Revolution” for the first issue of Two-Fisted Tales.  ¶ 6:02 PM 0 comments 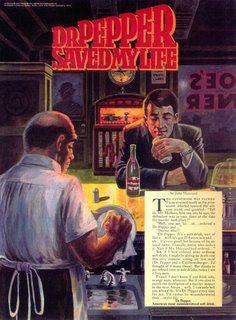 Wallace Wood: Against the Grain, part 13 Unhappy with his 1950 stockroom job, Orlando soon was back at the drawing board, apparently with very little prodding from Woody. “One day Wally called and asked me to help him with a job he was late on. Reluctantly, I began helping him out a few hours a night. That turned into four or five hours a night, and at the end of the month, I was making $50 or $60 a week doing comics. I figured I might as well get rid of my stock job as it only paid $7.50 a week. I hated it anyway.”

Glenn and Alma moved out of the West 64th Street apartment, and in the summer of 1950, Tatjana packed up her belongings and departed the West 97th Street rooming house to live above the Wood studio. “We lived together before we got married,” said Tatjana. “His mother got a caretaker’s job out on City Island, and Glenn moved with his mother. So the apartment became empty, and I moved into the apartment with Wallace. We took a day off to get married on August 28, 1950. We just went down to the Municipal Building when he had a day off.”  ¶ 11:19 AM 0 comments 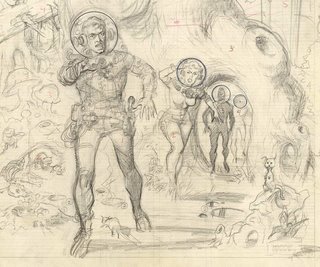