Potrzebie
Sunday, July 30, 2006
Wallace Wood: Against the Grain, part twelve When Orlando departed the West 64th Street studio, he left behind a highly prized artist’s mannikin which remained in Wood’s possession for the next three decades, despite Orlando’s attempts to retrieve it. In 1980 he told Theakston, “As I recall, I paid the last month’s rent, after I left the first time, with a beautiful polished wood artists’ mannikin, about three feet tall. A real fine piece of work. I’ve tried to buy it back from Wally several times. He always says no. He grew fond of it and still has it.” In the last months of his life, Woody made certain that the mannikin was returned to Orlando.  ¶ 6:03 PM 0 comments 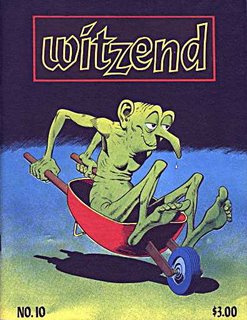 Monday, July 24, 2006
Wallace Wood: Against the Grain, part eleven In 1950 things suddenly fell apart at the center of the West 64th Street studio when Fox collapsed, owing the artists thousands. Harrison, who was a member of New York’s Hydra Club of science-fiction professionals, continued to package comics and magazines, selling his first sf story to Worlds Beyond the following year, but Orlando was so disillusioned by the experience he abandoned his art career on the spot. “They owed us a great deal of money — about $6000,” said Orlando. Interviewed by Greg Theakston (for Theakston’s Wallace Wood Treasury), he detailed the disappointing turn of events: “We really weren’t businessmen; we were just young artists. There was no real grapevine in those days. Artists were very tightlipped about where they were working for fear you would compete for their jobs. A few guys like Wally and I shared our accounts, but it didn’t happen often. Another artist who had been cheated by Fox called one day and suggested we see a lawyer. The bunch of us went to see this guy and paid him to look into it. As it turned out, I think the lawyer was working for Fox, so nothing ever came of it. I was so angry I quit the business, went to work in a stockroom on Long Island and lived with my folks. As it turned out, I was miserable.”  ¶ 10:42 AM 1 comments