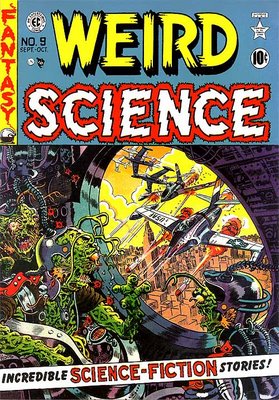 Wallace Wood: Against the Grain, part nine The changeover to EC’s New Trend began early in 1950. According to Harrison, he and Wood were partially responsible for Bill Gaines’ decision to publish science fiction: “Somewhere along the line we talked Bill into trying to start a science-fiction comic, only instead of doing real science fiction, he copped out and called it Weird Science. We just pressured him into trying something along those lines. I was always a science-fiction fan, and Wally was interested in science fiction too. I gave Gaines a lot of it to read. We just wanted to do a science-fiction comic, since there was none of that kind at all at the time. We kept working on Bill, and he finally took a flyer at it... We had no control over the titles of the two science-fiction comics or their exact formats. We just kept nudging Bill every once in a while to try them out. EC was a kind of a small family, only four or five guys there doing all the work. Bill was a very friendly guy whose presence encouraged mad things to go on in the office, footprints on the ceiling, that kind of thing. He was always open to suggestions, so Wally and I just kept pushing and pushing. I’m sure Weird Science and Weird Fantasy didn’t do very well.”

Wood’s work began to improve with each new science-fiction story, and soon a remarkable authority appeared in the brushwork, along with an atmospheric and highly dramatic approach to light and shadow. As Wood and Orlando formed a close working relationship, it affected Woody’s alliance with Harrison, who described the studio friction: “He’d become a much better artist than me by then. What with the typical personality conflicts of artists, we went our separate ways, and he turned the EC account over to me. Jules Feiffer I’d met when I’d gone to Will Eisner’s office looking for work, and I had Jules pencil one or two stories for me which I inked. ‘Werewolf’ in a Vault of Horror (#14, August-September 1950) was one, I think. He might also have written it. I don’t remember for sure. He was writing The Spirit then also. He wasn’t a very good penciler for the kind of thing EC was doing in their horror books, and without Wally I wasn’t a very good inker. I lost the account. For a while I had the account when he went off to work for other people — I believe he was drawing The Spirit for Eisner — then I lost it, went away, and he came back to work on his own for Gaines.”  ¶ 5:12 AM 3 comments