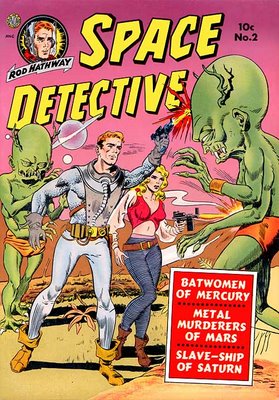 Wallace Wood: Against the Grain, part eight On the heels of the fictional Fox/EC romances, a real-life romance began after Wood met Tatjana Weintraub. Born in Darmstadt, Germany, she was living in Holland before coming to the United States in 1947 with her brother. “My brother wanted to emigrate because he wanted to go to the university,” she said in 1985. “The Quaker school we went to was an international Quaker school. In Holland you can’t study at a university unless you have a Dutch state exam. It was very hard to become a Dutch citizen, and we were stateless. Through the Quakers, he got an offer to come to the States. I didn’t know what I wanted to do. I got an offer too, and I traipsed along.”

She arrived in New York in December, 1947, shortly before the Wood brothers came East, and in an odd coincidence almost as if they were destined to meet, she moved into a rooming house on the same street where Woody lived in 1948 — West 97th Street. It was not until 1949, however, that she encountered the Wood brothers at a folk dance elsewhere in Manhattan.

“Through the school I went to in Europe, I got in touch with Quakers here. They had set up this group especially so that immigrants could meet Americans. Every Saturday night, a folk dance was held in the cafeteria of a Quaker school. Wallace and his brother showed up suddenly.”

Glenn and Woody attended the dances regularly, and in December, 1949, Tatjana began dating Glenn, who recalled, “Wally and I would go to the Quaker folk dances, and we met Tatjana and other people that we knew for quite a while there in New York. We both enjoyed that very much. Powell House — I think that was the place where we used to meet. We would go down in the lower part of Manhattan at this central meeting place and learn to square dance, and there were different callers who would carry on activities. Some of this was very, very great stuff. I really kind of wish I could find another group like that. Tatjana was and still is, a great dancer. She’s really tremendous on the dance floor.”

In December, 1949, the trio got together for an evening of fun and frivolity at the annual Christmas party of the Cartoonists and Illustrators School. “The first date we had,” said Tatjana, “I went out with his brother, and Wallace had a different date. Before that date, we only met down at that folk dancing, but I don’t remember whether it was several times. I would imagine so. The Hogarth School’s Christmas ball was in a large room; they may have rented a hall. We sat at a table, and there was also dinner. I remember that Wallace and I talked a lot right away to each other. I had a few dates with Glenn after that Christmas; I think we went to some movies. Wallace had this studio on West 64th where Lincoln Center is now. He and his mother and brother lived upstairs in the same building. One time Glenn and I had been out, and he took me to Wallace’s studio and asked Wallace to take me home because he couldn’t make it. We walked, I suppose, the West Side about 30 blocks, and I think that was the last date I ever had with Glenn.”

In addition to a dressmaking job, Tatjana attended night classes, a full schedule that left her little free time, but her growing relationship with Woody in the winter and spring of 1950 brought some changes. “I had to work to keep myself afloat. I went to the Traphagen School of Fashion in the evening after work. Then I met Wallace and started cutting classes. I gave it up.”  ¶ 7:41 AM 0 comments 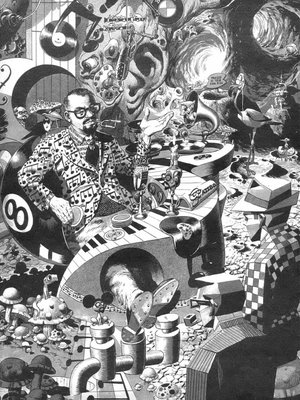 In Mad 31 (February, 1957), Wood illustrated "What's All This Jazz About Jazz?" Al "Jazzbo" Collins was a recording artist (A Lovely Bunch of Al Jazzbo Collins, Impulse, 1967) and New York/San Francisco disc jockey who broadcast from his phantasmagoric Purple Grotto. In 1969 he changed the spelling of his name to Jazzbeaux. This Mad feature appeared the same year that Jazzbo was the host of NBC's Tonight Show (during the interim period between Steve Allen and Jack Paar).

Wallace Wood: Against the Grain, part seven After studying illustration at the High School of Industrial Arts, Joe Orlando served with the Military Police among the occupation forces in Europe and then returned in 1947 to study under John Groth at the Art Students League, entering comic in 1948 with work for Catholic Comics and “Chuck White” for Pflaum’s Treasure Chest. Orlando remembers, “Early in my career I sold through an agent by the name of Epworth. Epworth didn’t like the artists knowing who was buying their artwork. He was afraid we would go directly to the companies for the work. And he was right. I met Wally in Epworth’s office one day, and we got to be pals. I didn’t know it, but my work was being sold to Fox Comics. Wally was a step ahead of the game; he knew who was publishing our material and suggested we work together.”

According to Orlando, the two artists exchanged “polite but reserved greetings” when they met, but there was “instant admiration” after they opened their portfolios and examined each other’s work. In 1986, Orlando recalled, “Years later when we talked about that occasion, we admitted we knew that somehow we would work together.”

Joe drew fast, and Wally inked faster. “When Wally put his brush to my drawing I was always amazed at the wonderful results. In fact, I never liked my own inking again. Wally was fascinated with how fast I could pencil. I was knocked out by his ability to make one of my scribbles look so good. We ended up renting a studio in a building that was torn down to make room for Lincoln Center.”

Among the other people who joined Wood, Orlando, and Harrison at this studio were artist Sid Check and salesman Ed McLean. The space they rented was located on a second floor at West 64th Street and Columbus Avenue. Two flights above the studio was a small apartment occupied by Wood, his mother and brother. At the West 64th Street studio the young artists juggled various accounts with Fox, EC, Fawcett and Avon. “My first whole comic book,” said Wood, “was either Steve Savage or Captain Science.” For Avon’s Captain Steve Savage (1950) he drew the 22-page “Captain Steve Savage Over Korea,” and the seven-page “Monster God of Rogor” appeared in the first issue of Captain Science (1950), with Orlando and Wood teaming on later issues.

Through the doors of the studio trooped a constant flow of visitors, including Jules Feiffer, who had worked with Woody on Eisner’s staff, Al Williamson and Roy Krenkel. For Orlando the day-to-day routine was akin to a graduate school in comics. Woody kept extensive files, jam-packed with the published work of numerous cartoonists and illustrators, and he and Joe huddled often over these files, flipping through the folders. A lighting effect rendered by Foster for a Prince Valiant head was redrawn to light Captain Science. A Foster lake scene from Prince Valiant became a Central Park lake in a romance story. “Foster’s inking techniques and compositions were constantly studied and this metamorphosed into our work,” Joe recalled. “Some of the comics artists we admired and envied were Joe Kubert, Mort Meskin and Frank Frazetta. Long shots, down shots, up shots and Milton Caniff’s foreground framing shots were discussed continually. Which of our friends drew better or finished pages faster were always good topics for debate. In the end, Frank Frazetta won hands down. Roy Krenkel was Frank’s best publicity agent: ‘Hi, guys! Guess what? I just came from Frank’s studio in Brooklyn, and I saw the most unbelievable seven-page story he started this morning. By four in the afternoon it was almost finished. Some modern guy running around in a knight’s costume on a freakin’ flying horse. It was great!’ Naturally, we felt like shit.”

The work continued, moving on to the next panel and the next, as the rush-hour roar of Manhattan subsided into the nighttime hum. Lights winked out all over the city but not on the second floor at West 64th. “Endless flowing coffeepots and cigarette packs that emptied out at three in the morning were our constant companions through long all-night work sessions,” Joe wrote recently. “The stories we were illustrating were sometimes mindless. But who cared? They paid the rent that gave us the chance to sit together and discuss art, women and politics. Wally was an avid record collector of country music, and he strummed on his guitar and sang work songs, sea chanties and western. When he stopped playing, Pete Seeger took over on records. I was a Frank Sinatra fan myself, so as far as I was concerned, these sounds were from a strange outer planet. I knew then the beginning of suffering for your art. I got to like the music but would never admit it to Wally.

“Woody and Harry Harrison loved to kid me about my Catholic school upbringing. Even though I had reached a stage in my life where I was beginning to wonder how the Pope managed to bless Nazi guns and give absolution to Allied soldiers at the same time, I wasn’t ready for Harry. ‘Why didn’t the Pope just excommunicate all German Catholics who continued to fight against the Allies? That would have ended the war a lot sooner, right?’ Harry, in his most professional manner, addressed himself to my sophomoric question with, ‘Joe, that’s not the real issue. What you have to address yourself to is: Does the Pope masturbate, or does he make it with nuns?’ Wally would break out in gales of laughter, and I would run to the bathroom to pray to God for forgiveness: ‘Dear God, I know I shouldn’t be hanging around with an atheist like Harry Harrison, but what can I do? Besides being a good background man, he’s a terrific salesman. Amen!’ God finally did help me out. He got Harry out of the comics business and made him into a science-fiction writer, thank God.”  ¶ 6:51 AM 0 comments