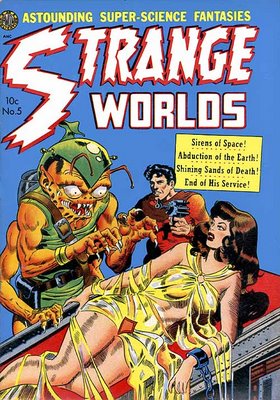 Wallace Wood: Against the Grain, part six Wood’s partner in 1949-50 on the Fox romance work was his C&I classmate, the 24-year-old Harry Harrison, best known today for his Deathworld and Stainless Steel Rat novel series and the film Soylent Green (1973), adapted from his novel Make Room! Make Room! (1966). For Graphic Story Magazine (#15) interviewers Bill Spicer and Pete Serniuk, in 1972, Harrison detailed his partnership with Wood: “I started working with Wally Wood, a very facile guy who really had a natural talent. At that time comics were going great guns, and we started selling art to Victor Fox, our first professional comics work. Anybody could work at Fox, whether they could draw well or not. We worked together because neither of us could hack it alone. We were a complete team; we did everything together. In the beginning I think he penciled and I inked. Then he got very good with inking and did the heads and hands. He’d break down the pages very tight with the figures, and we’d pass the pages back and forth, each handling certain kinds of swipes. We were illustrating a lot of romance titles, which were big then. Very badly written things with nine-panel pages and 500 words in captions and dialogue. Wally lettered so thick that we’d have only about one square inch per panel for the drawings... Fox had an endless stream of art directors, and all of these jokers would take kickbacks. Guys would come in to show them their material, the stuff with all the swipes. The art director would say, ‘Well, yeah, this is great stuff, but we don’t pay very much. Know what I mean?’ I think the rate at Fox was about $23 per page for ten-page stories. And while he was talking he’d slip you a note saying something to the effect that they also expected kickbacks of $5.00 a page. This made a big difference to us in the rates, of course. But all these guys took kickbacks, and if you didn’t go along with it, you wouldn’t get any work... We would slide in this ten-page pile of crap with a real good splash page for the first page on top. He would look at only the first page and count the other nine, flipping through them fast. Nobody really cared about the quality. Nobody looked at these books; no one read the things very carefully. So he’d count the pages. We’d give him the $50 or whatever it came to — five bucks a page in kickbacks — and then we’d get our check in the mail from Fox, not necessarily in a week or two but in a month or so, sometimes slower than that. The money owed would add up, and you’d almost literally have to go in and beat up on the guy to get your dough out of him. Sometimes we’d get some of the bigger guys in the school to go in our place. Fox himself was hardly ever around — I once saw him go by, zoom!, like that. The vice-president was someone by the name of Ganz, I think, a real milquetoast kind of guy. One time when they were behind in paying, we said we were going to go in there and threaten to beat him up and get our money. We set up an act. Wally was a very quiet guy, smoked a lot, and he had this ugly black fedora hat we’d use as a prop. I said I’d give him a nudge in Ganz’ office, and then he was to take the cigarette out of his mouth and crush it out in the ashtray at the right moment, and we’d act like we were going to beat him up unless he came across. So all right, in we went. Now Ganz was about six-foot-five, but he really was a coward. We threatened to beat the hell out of him. I gave Wally the nudge. He leaned over and put his cigarette out right in the middle of Ganz’ desk blotter, missing the ashtray. Great effect, you know, like something out of a George Raft movie. This really upset the guy. But we got the check from him. Then we took it to the bank, only to find out later it had bounced off the face of the moon. But the second time we got it — and it was for about $600 — it went through okay. We needed the dough badly. Six hundred in those days was an awful lot of money.”

Their Fox credits enabled the Harrison/Wood team to begin getting assignments from EC. “We went down one day to EC and Bill Gaines,” said Harrison, “the first time we got any kind of really decent publisher. He wasn’t paying much either — about $26 or $28 a page. He had A1 Feldstein and Johnny Craig in the outer office, acting as art directors... The first time we saw Gaines, we gave our samples to Feldstein. It was a couple of months later when Harvey Kurtzman brought in his first story, a whole story, broken down and lettered. He wanted to write and draw, both. I think Gaines and Feldstein were a little uptight about that, since they wanted writers and artists separate. But Bill called Wally and I in to look at Kurtzman’s story, and we really liked it. It was good stuff.”

Harrison/Wood art began appearing in the winter of 1949-50 in EC’s Modern Love, Saddle Romances, A Moon... A Girl... Romance, War Against Crime and Gunfighter, while they continued to grind out pages for Fox. Harrison described this initial EC work as “a lot of popular romances, mostly western romances. We had a carload of romance credits in those days at Fox. It was about all you could get; some crime, but Feldstein and Craig had the crime sewed up, doing most of it themselves. I think we did only one story, ‘A Bed of Murder,’ for War Against Crime around 1949 or 1950. For EC it was chiefly bad western romances... We did two or three stories which gave us some laughs monkeying around with the artwork, mainly to relieve us from the boredom of having to illustrate lousy scripts. One was on a story called “Playtime Cowgirl” for an EC western romance (Saddle Romances 11, March-April 1950). We brought the thing in originally with a big dong in the horse’s crotch, about four feet long, circumcised with crabs, real crabs and lobsters hanging from it, spider webs, Band-Aids all over it. Turned it in to Gaines, who loved it and kept it to show to his advertising man, Lyle Stuart. They showed it around; then forgot about it. Finally, it went to the engraver where they took black plates of it, then proofs, which got as far as the colorist, who was the one who caught it. ‘Mr. Gaines, isn’t this kind of a funny-looking horse?’ Gaines screamed to think it could get so close to going through. We just painted it out. They reshot the black plate, but it almost got by. Another one was also in the romance comics. They always had some title like ‘She Married a Man Who Gave Her No Love,’ which we changed to ‘She Married a Man With No Balls At All’ and pasted it over the real title. Stuck a lot of baseballs and footballs around the artwork, which could be peeled off. We’d sit around in the studio and think of ways to liven up the stories this way.”

For Woody such practical jokes served to release the tension of long hours at the drawing board under the pressure of deadlines. Low rates made speed and productivity a necessity. Then, during one of Wood’s visits to Epworth’s office, he met someone who could draw fast, Joe Orlando.  ¶ 7:43 AM 0 comments