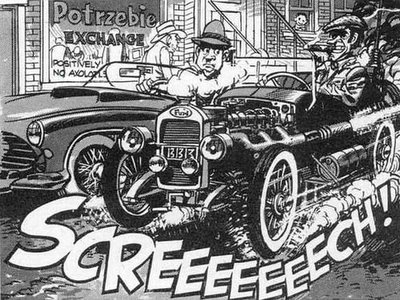 Saturday, January 28, 2006
Wallace Wood: Against the Grain, part three In 1944, as 11,000 airplanes, 4000 troop transports and 800 warships geared for the Allied invasion of Normandy, Wallace Wood received his diploma from West High. And as conflicts on a smaller scale mounted in the Wood household, the family split apart. Alma and Max separated, and their youngest son blew into the Windy City, finding a job as a printer’s assistant at the large printing firm of RR Donnelley. “He came to Chicago,” said Glenn, “stayed with me for a while and worked for Donnelley Press. For a young guy just out of high school, he had quite a responsible job with the press. That was really exacting work when they brought these rolls to the presses, cut the paper and started the thing moving. He was an assistant, but he had to make things move. It took a great sense of timing. Wally was extremely fast on the uptake; he was very quick. He learned things in a very short order. Then he signed up with the Merchant Marine, went to Sheepshead Bay in New York, got his training there and shipped out. When I saw Wally again, he was a salty seaman; he would visit me there at Illinois Tech. That must have been around 1944. He would get on leave or come out of a ship, go on his way home, and he would stop in Chicago and see me.”

If the comics had given Woody a taste for adventure, the Merchant Marine upped the ante, for the dangers and risks of life aboard a high-octane tanker were very real. He sailed for the Mediterranean, South America, the Philippines, Guam, Eniwetok and the Pacific island of Ulithi, site of a Japanese seaplane base which was taken without opposition in 1944. “The nearest he actually came to the shooting war,” wrote Steranko, “was in picking up enemy sailors after their ship was sunk. Wood continued to draw in his off-duty hours, looking ahead to the time he would be a working professional.”

Six years later, when he was a working professional, Wood’s wartime memories brought a striking authenticity to his collaboration with Harvey Kurtzman on a Merchant Marine story, “The Murmansk Run!” (Two-Fisted Tales 21). Discussing this story decades later with John Benson, Wood stated, “I don’t remember exactly how “The Murmansk Run!” came about, but I think I told Harvey that I’d like to do a story on the Merchant Marine, and so he wrote it. I was in the Merchant Marine, and I heard a lot of stories about the Murmansk Run.” Of all Merchant Marine routes, it was the most dangerous, with continual torpedo attacks from German submarines; more than a thousand died when the S.S. Dorchester went down in 1942. Jack Kerouac, who traveled the Murmansk run as a ship’s scullion on the Dorchester’s next to final voyage, wrote (in Vanity of Duluoz, 1967) a description of life aboard the Dorchester with shipboard tensions and a knife fight not unlike the one depicted in the EC story:

...Some of the crew going about with sheathed knives and daggers more of a semiromantic fancy than a necessity, poop decks, reading the funnies on poop decks, powder and ammunition in the afterdeck storeroom not 10 feet from the foc’sle where we’uns slept, up ahead foaming main and clouds...
...The great card games, the tremendous card games and crap games go on in the diningroom, Pop is there with his cigarette holder, chef’s cap, mad rich rakish laugh, some of the base workers mixed in the games, the scene seasoned with impossible characters, shit language, rich warm light, all kinds of men gambling their shore pay away in a dare at Neptune... Sums of money changing hands with death nearby. What an immense gambling ship this is...
The barefooted Indian deckhand toured every foc’sle at dusk to make sure the portholes were closed and secured.
He had a dagger in his belt.
Two Negro cooks had a big fight in the galley at midnight over gambling, that I didn’t see, where they swung huge butcher knives at each other.
A little Moro chieftain turned third cook, with small neck, swiveled and shriveled when he turned to see.
He had the biggest knife of them all in his belt, a first-degree Swamee machete from old Mindanao.

In the Kerouac biography Desolate Angel, Dennis McNally states, “The Merchant Marine was the only integrated service in America,” and this was acknowledged by Wood and Kurtzman who included a black crew member in their story. As a teenager Wood had racist views, he once explained to Al Williamson, but his WWII encounters with blacks changed this attitude completely. While Wood was never on the Murmansk run, life on the tanker did involve him in conflicts and scrapes of the type later recounted in both “The Murmansk Run!” and Vanity of Duluoz. “He had some bloody fights,” said Glenn Wood. “He was always kind of small for his size, but he seemed to hold his own in pretty tight circumstances. It was pretty brutal being on board ship in a war zone, and he had some hairy times. Being on a high-octane tanker, he was very fortunate that he never got hit. Or there wouldn’t have been enough to talk about.”

These experiences gave Wood a new input and perspective on his artwork, and years later he commented, “I really didn’t learn to draw until I got into the Merchant Marine.” By leading an adventurous life while continuing with his art practice, Wood may have felt that both of his parents could be proud of him.

In the months following the end of the war, Woody left the sea and took to the air — enlisting in the Paratroopers and heading for his training at Fort Benning, Georgia. By this time his brother had graduated Illinois Tech and was in for a hitch with the Navy: “I got out of Illinois Tech in February 1946, went to school in Newport and shipped out to the West Coast on a destroyer escort. And during all this time, around the spring of 1946, Wally went through Paratroop training and shipped over. The first jumps he was so elated. When he pinned on his wings, it was one of the high moments of his life. He must have made at least a dozen jumps, but he said, ‘Each one came harder.’ I guess you fully realize what you’re getting into; the preparation and everything was thorough, but they start to sweat it out after a while.”

A member of the 11th Airborne, Woody was sent from Fort Benning to occupied Japan where he was assigned to the island of Hokkaido, a major fishing center with volcanic peaks amid the forests. Here he found the occupying Americans sharing the island with 3,852,821 Japanese and some 15,000 short and stocky aboriginal Ainus, whose language does not relate to any known speech. Hunters and food-gatherers with animistic religious beliefs, the Ainus outnumbered the Japanese on Hokkaido until 1800. Stationed at Hokkaido’s capital, Sapporo, the island’s largest city with a population at that time of 259,602, Woody alleviated his boredom not only by drawing but also by writing page after page of letters to his brother. “Wally was a tremendous correspondent. He wrote well, and he wrote some great letters overseas and when he was in the Paratroopers in Japan. Wally and I, being quite opposite natures, were very close brothers all the way through. At first he was very enthusiastic about meeting all the Japanese, and I guess a lot of them were quite friendly to servicemen. He remarked on how everything was so tiny; the people were small, and the trains were small. After a while, the super-crowding that goes on in Japan got to him. As time went on, he found being out in the northern area, in Sapporo, rather boring. It was an exhilarating experience at the beginning, but after he was there for a longer period of time, he couldn’t wait to get out.” Wood’s observations of life in Japan furnished him with background for later stories, notably the Nagasaki setting of “Atom Bomb!” (Two-Fisted Tales 33), while his knowledge of Paratroop jumps was recalled for his contributions to Avon’s 1951 With the U.S. Paratroops Behind Enemy Lines.

Perhaps Max Wood, by the late Forties, viewed his son somewhat differently than he had before the war, but writer-artist Nick Cuti, a Wood assistant during the early Seventies, recalled that Woody still saw a breach he could not close. “I remember Woody telling me a story,” said Cuti. “After the war he joined the Paratroopers, and he wanted to show off in front of his father. He came to visit his father, and he was in uniform. His father, a foreman of the lumberjacks, turned around to his lumberjack friends, started barking orders and had them running and scrambling all over the place. Then he looked at Woody and nodded his head, as if to say, ‘You see, you may think you’re something special, but you still aren’t as good as your old man.’ He didn’t say that, but that was the kind of look he gave Woody: ‘I’m still tougher than you are.’ I guess to that type of person, it’s important to stay that way.”

The earliest known Wood artwork for reproduction appeared during this period when he drew for mimeographed camp publications, as he explained to Dorf, “I did drawings for a couple of Army papers. Mimeograph stuff. Sexy gals. I still have a copy around somewhere. I got in trouble with my boss. Every issue in the camp was suppressed by the authorities.”